In 1874, for the first time since the Civil War, Republicans lost control of the House of Representatives, in part due to a national recession and in part because of southerners retaking control of their state legislatures and throwing their support behind the Democratic Party. They would retain control until 1894, when Republicans retook the house, and by the largest turnover in US history, when the Democrats lost 127 seats in the House. It was a reversal of fortune, as just four years earlier, in 1890, Republicans suffered what had up to that time been the largest loss of seats in the House. In the 1890 midterms, Republicans lost 93 seats, 86 of which were won by Democrats. What happened to cause such large reversals of fortune? 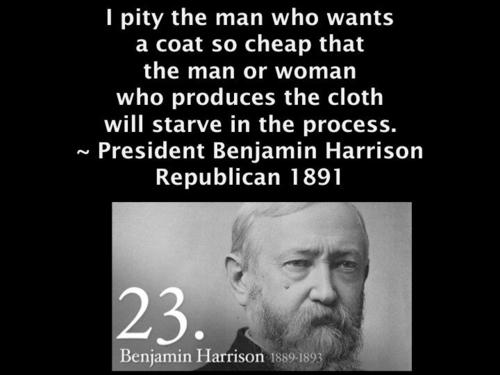 Two years earlier, in 1888, Grover Cleveland sought re-election to the Presidency after becoming the first Democrat since before the Civil War to occupy the White House just four years earlier. In the election, Cleveland would win the popular vote, but strategic victories in swing states, including New York, would get a Republican back in the White House.

Benjamin Harrison, a Senator from Indiana, had won the Republican Nomination, largely with support from the past Republican Presidential Candidate James G. Blaine (the man Cleveland defeated in 1884). Harrison was not dynamic or charismatic, but he had two claims to fame: he had a distinguished record as a soldier in the Civil War, and he was the grandson of a former President, albeit the one with the shortest tenure in office, William Henry Harrison. Harrison ran a more traditional front-porch campaign, receiving visiting delegations at his home in Indianapolis. He campaigned in favor of protective tariffs, a popular position at the time, especially in northern industrial states. The election focused on the swing states of New York, New Jersey, Connecticut, and Harrison's home state of Indiana, all where high tariffs were popular. Harrison won New York and Indiana. Voter turnout was high, at 79.3%. Harrison received 90,000 fewer popular votes than Cleveland, but narrow victories in states with a large number of electoral votes resulted in his winning the Electoral College by a margin of 233 to 168. In the congressional elections of 1888, Republicans increased their membership in the House of Representatives by 19 seats.

Harrison was an honest president, and that worked to his detriment. He had made no political bargains, and when he learned that his supporters had made many pledges on his behalf to party bosses, Harrison refused to honor them. Party Boss Matthew Quay of Pennsylvania, was denied a Cabinet position for his political support during the convention. Harrison acted quite independently in selecting his cabinet, much to the Republican bosses' dismay. He selected James G. Blaine as Secretary of State as expected, but delayed the appointment in order to prevent Blaine from becoming involved in other appointments. His failure to involve party bosses and senators in patronage appointments led to resentment against the President within his own party. Harrison alienated many important Republican supporters in large states including New York and Pennsylvania, something that would come back to harm him in the mid-terms, as well as when he ran for re-election four years later.

Tariff levels had been a hot political issue since the time of John Quincy Adams and Andrew Jackson, and they became the most dominant issue in the midterms and later in the 1888 election. The high tariff rates had created a surplus of money in the Treasury, which led many Democrats, as well as those in the growing Populist movement, to call for lowering them. Tariffs favored manufacturers who sold their goods locally, but hurt those such as farmers and cotton growers who tried to sell their crops abroad, where they were met with retaliatory tariffs. Most Republicans preferred to maintain the rates, so as to increase government revenues and spend the surplus on internal improvements as well as to eliminate some internal taxes.

Things got worse when Representative (and future President) William McKinley and Senator Nelson W. Aldrich introduced the McKinley Tariff that would raise tariffs even higher. Harrison tried to get Congress to pull in the reins on higher tariffs in order to make the tariff more acceptable. He called for Congress to add reciprocity provisions, which would allow him as president to reduce rates when other countries reduced their rates on American exports. Congress lowered tariffs on some items, but not enough. The tariff was removed from imported raw sugar, and sugar growers in the United States were given a two cent per pound subsidy on their production. But the McKinley Tariff enacted the highest average rate in American history, and the spending associated with it contributed to the reputation of Harrison operating a "Billion-Dollar Congress."

Things got worse in 1890 when a financial crisis arose, precipitated by the near insolvency of Barings Bank in London. Barings had faced bankruptcy due to excessive risk-taking on poor investments in Argentina. An international consortium assembled by the governor of the Bank of England, which included the major London banks, created a fund to guarantee Barings' debts, thereby averting a larger depression. But the crisis had ripples that led to a significant decline in stock prices in the United States.

The stagnant economy worsened after the Panic of 1890. This, along with a lack of support for McKinley's steep tariffs caused voters in the mid-terms to turn against Republican candidates. They saw the tariffs as favoring large industries at the expense of consumers. The Republican-controlled Congress criticized for its excessive spending, and it earned the nickname of The Billion Dollar Congress. Democrats promised to cut the budget. The result was a gain of 86 seats by the Democrats (of 93 seats that were lost by Republicans) giving Democrats a 238 to 86 seat majority in the House. Republicans still controlled the Senate, but that was mainly because Senators were appointed by legislatures at the time, not by popular vote. The victory sowed the seeds for Harrison's defeat in the 1892 presidential election.

Republicans also lost support because of their promotion of controversial English-only education laws which had been enacted in Wisconsin and Illinois in 1889. A surge in nativist and anti-Catholic sentiment within those state parties, had cost the party support. Many German clergy rallied their parishioners to the Democratic Party. German immigrants had once been strong Republican supporters, and Abraham Lincoln had even gone so far as to purchase a German language newspaper to reach this base. Also, struggles over temperance laws had also been alienating immigrants from the prohibitionist Republican Party across the Midwest. The party suffered losses in gubernatorial elections in Iowa and Ohio and this was believed to be a major issue. 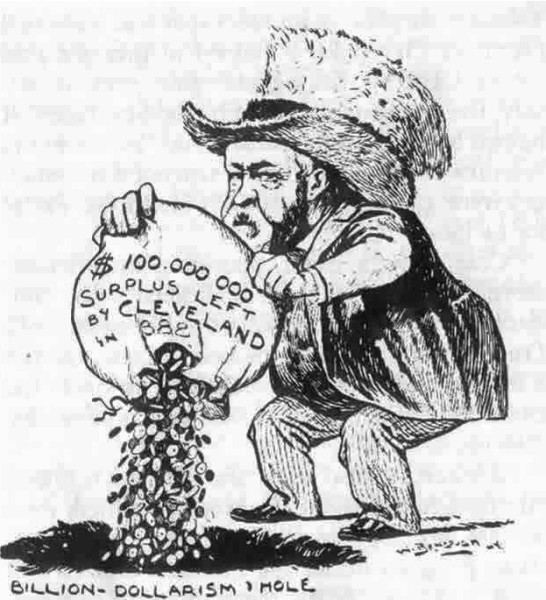 This election also saw the Populist Party, a coalition of farmers and laborers who wanted to overhaul the nation's financial system, and they also made inroads into Congress at the expense of the Republicans.

These policy gaffers would pave the way, two years later, for Grover Cleveland's return to the White House, making him the only president to serve two non-consecutive terms in office.
Collapse