There have been some large gains and losses in mid-term elections, with one of the largest (the fourth largest to be precise) occurring in 1854. It was the time of Bleeding Kansas, a time in the lead-up to the Civil War, when another type of civil war was taking place in the center of the country (as it exists today) when competing factions battled over whether slavery would be introduced into the Kansas-Nebraska territory, and it was a time when the nation had a President who was ill-equipped to deal with the crisis. 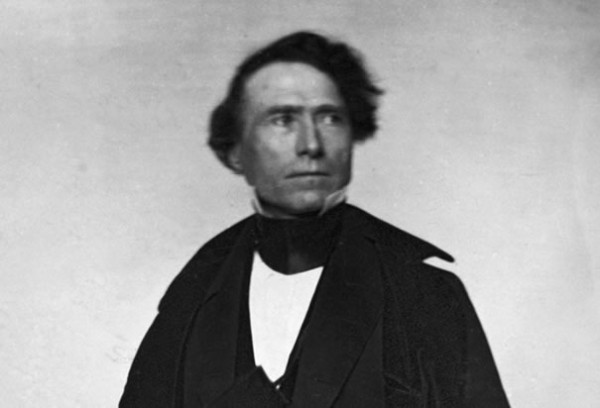 For years earlier, the Compromise of 1850 had been passed and many had hoped that it would bring an end to many of the issues that were dividing the nation between free states and slave states. Under the compromise, Texas surrendered its claims to present-day New Mexico and other states in return for federal assumption of Texas's public debt. California was admitted as a free state, while the remaining portions of the territories acquired from Mexico were organized into New Mexico Territory and Utah Territory. Under the concept of popular sovereignty, the people of each territory would decide whether or not slavery would be permitted. The compromise also included a more stringently enforced Fugitive Slave Law and banned the slave trade in Washington, D.C.

The issue of slavery in the territories was be re-opened by the Kansas–Nebraska Act, and the Compromise of 1850 had only postponed Civil War. Franklin Pierce had strongly supported the compromise, and in December of 1850 he had delivered a well-received speech in which he pledged himself to what he called "The Union! Eternal Union!" When in that same month, the Democratic candidate for governor of Pierce's home state of New Hampshire, John Atwood, issued a letter opposing the Compromise, Pierce and others arranged to recall the state convention and remove Atwood from the ticket. The issue helped to elevate Pierce's profile within the Democratic Party.

As the 1852 presidential election approached, the Democrats were divided by the slavery issue and everyone expected that the 1852 Democratic National Convention would result in deadlock, with no major candidate able to win the necessary two-thirds majority. New Hampshire Democrats had planned on supporting Levi Woodbury, an Associate Justice of the Supreme Court, as a compromise candidate. Woodbury's death in September 1851 opened up an opportunity for Pierce's allies to present him as a potential dark horse candidate. Pierce had not held elected office for 10 yeas, and lacked a national reputation. While making statements that he did not want the nomination, this was likely disingenuous as Pierce allowed his supporters to lobby for him, with the understanding that his name would not be entered at the convention unless it was clear none of the front-runners could win. As the convention approached, he wrote letters reiterating his support for the Compromise of 1850, including the Fugitive Slave Act.

When the convention began on June 1 in Baltimore, it deadlocked as expected. On the first ballot of the 288 delegates, held on June 3, Lewis Cass had 116 votes, James Buchanan had 93, and the rest were scattered among a variety of candidates, but without a single vote for Pierce. The next 34 ballots passed without a winner and without any votes for Pierce. Pierce began to pick up a small number of votes in subsequent ballots and after the 48th ballot, North Carolina Congressman James C. Dobbin delivered an unexpected and passionate speech in support of Pierce, sparking a wave of support for the dark horse candidate. On the 49th ballot, Pierce received all but six of the votes, and won the Democratic nomination for president. Delegates selected Alabama Senator William R. King, a Buchanan supporter, as Pierce's running mate. (Rumors have persisted that Buchanan and King, two lifelong bachelors, were more than just friends, but that's another story.)

When word reached New Hampshire of the result, Pierce's wife Jane fainted. She saw his presidential ambition as vanity and as displeasing to God. In the election campaign the Whigs could not unify their factions. The two major parties ran similar campaigns and the lack of political differences resulted in voter turnout being at its lowest level since 1836. In the end Pierce and the Democrats won every state except Kentucky, Tennessee, Massachusetts and Vermont. Pierce received 254 electoral votes compared to 42 for his opponent Winfield Scott. Pierce received 3.2 million votes and won the popular vote with 50.9 to 44.1 percent. Democrats won large majorities in both houses of Congress.

During the transition period, tragedy struck on January 6, 1853, as Pierce and his family had been traveling by train. Their car derailed and rolled down an embankment near Andover, Massachusetts. Both Franklin and Jane Pierce survived, but in the wreckage their only remaining son, 11-year-old Benjamin, was crushed to death. Both Pierce and his wife suffered from severe depression as a result. Pierce dealt with his grief with increased drinking and the incident almost certainly affected Pierce's performance as president. Jane Pierce believed that the train accident was divine punishment for her husband's pursuit and acceptance of high office. Pierce, then the youngest man to ever be elected president, chose to affirm his oath of office on a law book rather than swear it on a Bible.

The greatest challenge to the country during the Pierce administration was the passage of the Kansas–Nebraska Act. The largely unsettled Nebraska Territory stretched from Missouri to the Rocky Mountains, and from Texas north to what is now the Canada–US border. Senator Stephen Douglas wanted a transcontinental railroad with a link from Chicago to California, through the vast western territory. Organizing the territory was necessary for settlement as the land would not be surveyed nor put up for sale until a territorial government was authorized. Those from slave states wanted the institution of slavery to be able to expand into territories. Douglas wanted to let local settlers decide whether to allow slavery. This would repeal the Missouri Compromise of 1820, as most of the territory was north of the 36°30′ N line the Missouri Compromise, which was supposed to be "free". The territory was to be split into a northern part, Nebraska, and a southern part, Kansas, and the expectation was that Kansas would allow slavery and Nebraska would not. Southern politicians belied that the Compromise of 1850 had already annulled the Missouri Compromise because it had admitted the state of California, including territory south of the compromise line, as a free state.

Pierce had wanted to organize the Nebraska Territory without explicitly addressing the matter of slavery, but Douglas could not get enough Southern votes to accomplish this. Pierce understood that the bill would reopen bitter opposition. Douglas and Davis convinced Pierce to support the bill. It was met with tenacious opposition from northerners such as Ohio Senator Salmon P. Chase and Massachusetts's Charles Sumner.

Pierce and his administration used threats and promises to keep most Democrats in line and supportive of the bill. The Whigs split along sectional lines. The Kansas–Nebraska Act was passed in May 1854. The result was a violent conflict within the territory. Douglas's supporters had claimed that the bill would make the question of slavery a non-issue in Congress, leaving decisions about whether slavery would be permitted in the hands of the people rather than the Federal government. But northerners saw the Kansas–Nebraska Act as an attack on the power of free states.

Douglas and former Illinois Representative Abraham Lincoln debated the Kansas–Nebraska Act in seven public speeches during September and October 1854. Lincoln gave his most compelling argument against slavery and the Kansas-Nebraska Act in Peoria, Illinois, on October 16, in his famous Peoria Speech. The speeches set the stage for the Lincoln-Douglas debates four years later, when Lincoln sought Douglas's Senate seat.

Even while the act was being debated, settlers on both sides of the slavery issue traveled into the territories in order to secure the outcome they wanted in the voting. The passage of the act resulted in so much violence between groups that the territory became known as Bleeding Kansas. Thousands of pro-slavery supporters, known as "Border Ruffians" came from Missouri to vote in the territorial elections even though they were not resident in Kansas. This gave them the victory. Pierce supported the outcome despite the irregularities. When Free-Staters set up a shadow government, and drafted the Topeka Constitution, Pierce called this an act of rebellion and continued to recognize the pro-slavery legislature, which was dominated by Democrats, even after a Congressional investigative committee found its election to have been illegitimate. He dispatched federal troops to break up a meeting of the Topeka government.

Voters showed their displeasure with what had occurred. The midterm congressional elections of 1854 and 1855 were devastating to the Democrats (as well as to the Whig Party). The Democrats lost 69 seats in the House of Representatives, losing almost every state outside the South. Whigs lost 14 seats. A number of third parties opposed to Kansas Nebraska won seats in the House. The American Party or "Know Nothings" won 51 seats. The Anti-Nebraska Party won 22. The newly formed Republican Party won 13 seats, the People's Party won 9, the Free-Soil Party won 4 and 3 independents were elected. Democrats retained control of the Senate but lost 3 seats there, while Republicans elected 3 senators. 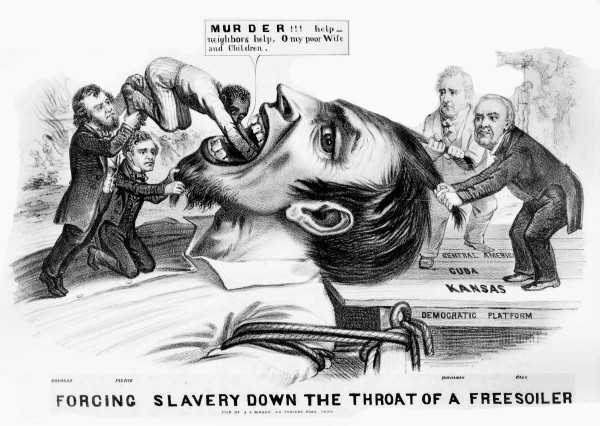 In Pierce's home state of New Hampshire, the Know-Nothings elected the governor, all three representatives, and dominated the legislature. Kansas-Nebraska continued to be an issue that would continue on into the next administration. Pierce had expected to be renominated by the Democrats as their candidate in 1856, but this issue made his chances of winning re-election nearly impossible. When balloting began on June 5, 1856 at the Democratic convention in Cincinnati, Pierce received only 122 votes, many of them from the South. James Buchanan, who had been removed from this issue because he had been Ambassador to Great Britain, finished first with 135 votes, with Douglas and Cass receiving the rest of the votes. After fourteen ballots, none of the three main candidates were able to get two-thirds of the vote. Pierce withdrew his name and asked his supporters to support Douglas. Douglas, who was then only 43 years of age, believed that he stood a better chance of winning the Presidency in 1860. After two more deadlocked ballots, Douglas's managers withdrew his name, leaving Buchanan as the clear winner. This loss marked the only time in U.S. history that an elected president who was an active candidate for reelection was not nominated by his political party for a second term.

Pierce left office in March of 1857, and is quoted, correctly or otherwise, as having said "There's nothing left, but to get drunk."
Collapse