If you are like me and are wondering what the largest loss of seats was for a party in the House of Representatives in mid-term elections, the answer is 127 and it happened in 1894, when the Democratic Party lost control of the house and went from having 218 seats in the House in 1892 down to 93. Just two years earlier, Grover Cleveland had been elected to his second term as President, the first to serve non-consecutive terms. In the year before the mid-terms, the nation would be struck by another great recession known as the Panic of 1893. So how did Republicans retake the House, and by such a large margin? 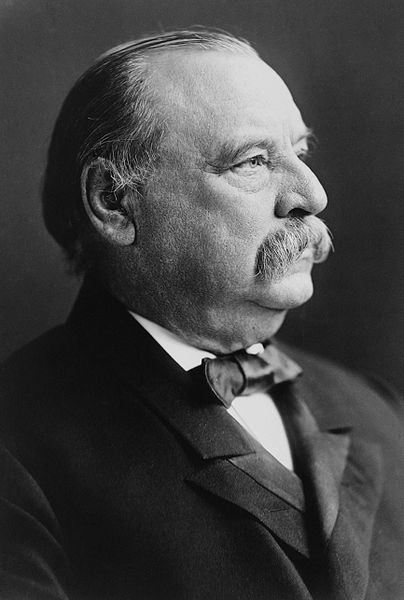 After his loss in the 1888 election, Cleveland returned home to New York state, where he resumed his legal career. In February of 1891 Cleveland published what became known as his "Silver Letter" in which he criticized the rising Free Silver movement in the Democratic Party (a movement that wanted to replace the Gold Standard with silver backed currency). Cleveland did so partly because he felt strongly about the issue, but also because he had his sights set on a second term as President. His chief opponent for the Democratic Presidential nomination in 1892 was David B. Hill, a Senator for New York and a supporter of bimetallism (a dollar backed by both gold and silver). Hill tried to form a coalition of those within the party who disliked Cleveland, made up of silverites, those who supported high tariffs, and those from Tammany Hall, but he could not garner enough support to deny Cleveland the nomination. Cleveland was nominated on the first ballot of the convention. He was able to defeat Republican Benjamin Harrison in a rematch of the contest he had lost four years earlier, because the Republican policy of high tariffs, popular in 1888, had now made imported goods so expensive that many voters now supported tariff reduction. Many Westerners, who had been traditionally Republican voters, defected to James Weaver, the candidate of the new Populist Party. Weaver had promised them Free Silver, generous veterans' pensions, and an eight-hour work day. The Tammany Hall Democrats towed the party line, allowing a united Democratic Party to carry New York. Cleveland won 46% of the popular vote and 62.4% of the electoral vote. Harrison won 43% of the popular vote and 32.7% of the electoral vote, while Weaver won 8.5% of the popular vote. In the concurrent congressional elections, Democrats retained control of the House and won control of the Senate, giving the party unified control of Congress and the presidency for the first time since the Civil War.

During the transition, outgoing president Harrison seemed unconcerned about a pending economic crisis, despite the warning of individuals such as J.P. Morgan to take steps to reassure investors. On February 20, 1893, just twelve days before Cleveland's inauguration, the Philadelphia and Reading Railroad went into receivership. Shortly after Cleveland's inauguration, stock prices dropped rapidly. Several underlying issues were seen as the cause of a severe economic crisis. One factor was European credit. European investors often infused cash into the economy, where they could receive a better rate on their investment. However, international investor confidence had been damaged by a financial crisis in Argentina, which had nearly caused the collapse of the London-based Barings Bank. Poor economic conditions in Europe, as well a the Argentinian financial crisis led many European investors to liquidate their American investments. A second factor was a poor cotton crop in the U.S. in 1892. Previously, the export of cotton had infused the U.S. economy with European cash and credit, but this was not the case in 1893. These factors left the U.S. financial system with insufficient financial resources at a time when the U.S. lacked a central banking system, leaving the federal government with little control over the money supply. Panic spread, leading to a major bank run in May 1893 in which depositors withdrew their funds, leaving the financial system with even less resources.

Cleveland was opposed to bimetallism because he believed that it encouraged the hoarding of gold and discouraged investment from European financiers. He believed that the gold standard would alleviate the economic crisis by providing a solid currency. He sought to repeal the Sherman Silver Purchase Act and end the coinage of silver-based currency. To do so, Cleveland called for a special session of Congress, to begin in August 1893. The silverites rallied their supporters in opposition, but the House of Representatives passed the repeal bill after debating it for fifteen weeks. In the Senate, Cleveland used the presidential bully pulpit to prevent attempts at a compromise bill, and combination of Senate Democrats and eastern Republicans supported the repeal of the Sherman Silver Purchase Act. The repeal bill passed the Senate by a 48–37 majority. This marked the beginning of the end of silver as a basis for American currency.

But Contrary to Cleveland's assertions, the repeal failed to restore investor confidence. Hundreds of banks and other businesses failed, and within two years 25 percent of the nation's railroads were in receivership. Unemployment rates rose above 20 percent in much of the country, while those who were able to remain employed did so with significant wage cuts. The economic panic also caused a drastic reduction in government revenue, so much so that in 1894, the government was in danger of being unable to meet its expenditures. Cleveland convinced a group led by financier J. P. Morgan to purchase sixty million dollars in U.S. bonds. The deal resulted in an infusion of gold into the economy, allowing for the continuation of the gold standard, but Cleveland was publicly criticized for relying on Wall Street bankers to keep the government afloat.

It was inevitable that the poor economic conditions and high unemployment levels would result in voter anger at the polls in the mid-term elections of 1894. In the spring of 1894 a group of workingmen led by Jacob S. Coxey began to march east toward Washington, D.C. to protest Cleveland's policies. This group, known as Coxey's Army, demanded a national roadbuilding program to give jobs to workingmen, and a bimetallist currency to help farmers pay their debts. The march began with just 122 participants, but major coverage in the press caused many individuals to join Coxey's Army along its route. Upon arriving in Washington, the marchers were dispersed by the U.S. Army and then prosecuted for demonstrating in front of the United States Capitol. 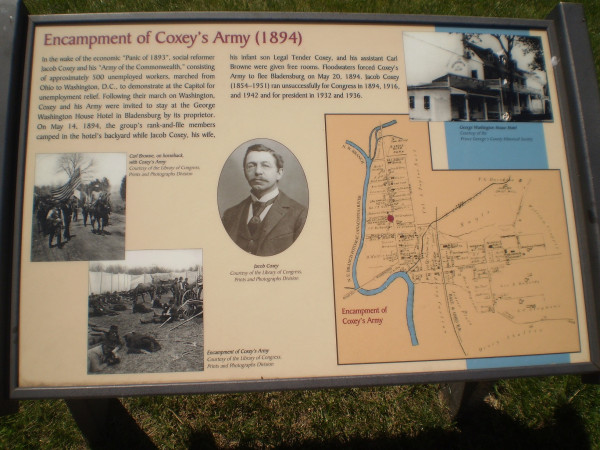 In the mid-term elections that fall, Jacob Coxey ran unsuccessfully run for Congress as a member of the Populist Party in his home state of Ohio. But the protest was a sign of larger voter dissatisfaction with the Cleveland administration. The Democrats suffered a landslide defeat in the House, losing over 127 seats in the single largest swing in the history of the House. The Democrats also lost four seats in the Senate, and the President's party completely lost control of both houses of Congress, the first time this ever happened in a midterm election.

The Democratic Party losses have been blamed on the Panic of 1893 and the ineffective party leadership of Cleveland. Cleveland went on not only to lose the next election, but also to lose control of his party. The Democratic Party underwent a major turnover in party leadership. William Jennings Bryan was nominated as the party's Presidential Candidate in 1896 and took the party in a more populist direction.
Collapse