The mid-term elections of 1874 marked the first time since the Civil War that the Democrats retook control of the House of Representatives, gaining a whopping 93 seats. Before the mid-terms that year, Republicans held a majority of 171 to 139 in the House. After the elections, the score was 199 to 106 in favor of the Democrats. What happened to bring about such a massive shift? 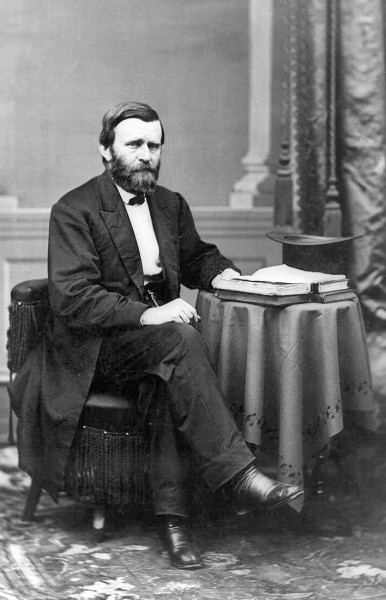 At the end of the Civil War, Ulysses Grant was said to be the most popular man in the northern states, even more popular than Abraham Lincoln before Lincoln's death. Grant's ultimate election as president took place in 1868, made more certain because of the unpopularity of Andrew Johnson. In 1872, Grant ran for re-election, but as with almost all presidents, incumbency came with its detractors. The Civil War may have ended in 1865, but resentment between northerners and southerners continued, even within Grant's own party.

In 1870, a group known as Liberal Republicans was formed, made up of reformers, those who supported low tariffs, and those who opposed Grant's aggressive prosecution of the Ku Klux Klan. They withdrew support for Grant and the Republican Party, one of the reasons being their strong dislike of Grant's alliance with Senators Simon Cameron and Senator Roscoe Conkling, who were notorious spoilsmen politicians.

At their convention in May of 1872, the Liberal Republicans nominated Horace Greeley, editor of the New York Tribune, a bitter enemy of Grant's, as their candidate for president, and Missouri governor B. Gratz Brown as his running mate. The Liberals campaigned against what they called "Grantism" which they described as corruption, nepotism, and inefficiency. They also called for the withdrawal of federal troops from the South, literacy tests for African-Americans to be able to vote, and amnesty for former Confederates. Rather than run their own candidate, the Democrats adopted the Greeley-Brown ticket and the Liberals party platform. Greeley used the publicity afforded by his newspaper for wider name recognition and a more prominent campaign voice. His central message was that the Grant administration was failed and corrupt.

The Republicans nominated Grant for reelection, with Senator Henry Wilson of Massachusetts replacing Vice-President Schuyler Colfax on the ticket. Colfax's name had been tainted with scandal. The Republicans borrowed portions of the Liberals party platform such as "extended amnesty, lowered tariffs, and embraced civil service reform" in order to dilute Greeley criticisms. Grant lowered customs duties, gave amnesty to many former Confederates, and implemented a civil service merit system. This neutralized much of Greeley's message. The Republicans' platform even stated how women's rights would be treated with "respectful consideration." But when it came to Southern policy, Greeley called for local government control to be given to white citizens only, while Grant advocated federal protection of African-Americans. This earned Grant the support of many prominent abolitionists and other reformers.

Grant won reelection easily thanks to his campaign strategy and to federal prosecution of the Klan. He received 3.6 million votes (55.6% of all ballots cast) compared to Greeley's 2.8 million and won an Electoral College landslide of 286 to 66. Grant lost in six former slave states

On March 4, 1873, in his second inaugural address, Grant talked about what he considered the major issue of the day: freedom and fairness for all Americans, with an emphasis on full citizenship for freed slaves. Grant ended his address by saying, "My efforts in the future will be directed towards the restoration of good feelings between the different sections of our common community".

Economic problems arise during Grant's second term. He continued to work for a strong dollar, signing into law the Coinage Act of 1873, which effectively ended the use of both silver and gold as money (a practice known as "bimetallism"). This established the gold standard and discontinued the standard silver dollar, making the gold dollar as the sole monetary standard. It seemed like a sound move, but because the gold supply did not increase as quickly as the population, it resulted in deflation. A group known as Silverites wanted more money in circulation in order to raise the prices that farmers received. They argued that deflation made debts more burdensome for farmers. A lower price of goods included their crops, making it more difficult for farmers to earn an income to retire those debts.

More economic turmoil came about in September of 1873, when Jay Cooke & Company, a New York brokerage house, collapsed after it failed to sell all of the bonds issued by Cooke's Northern Pacific Railway. The collapse rippled through Wall Street, and other banks and brokerages that owned railroad stocks and bonds were also ruined. On September 20, the New York Stock Exchange suspended trading for ten days. Grant relied on advice from leading businessmen and bankers in New York on how to address the problem. It became known as the Panic of 1873. Grant instructed the Treasury to buy $10 million in government bonds, injecting cash into the economy. This curbed the panic on Wall Street, but something called the Long Depression swept the nation. 89 of the nation's 364 railroads became bankrupt and this rippled through the economy.

Congress hoped inflation would stimulate the economy and passed legislation which became known as the "Inflation Bill" in 1874. The bill which would have added $64 million in greenbacks to circulation, but some Eastern bankers opposed it because it would have weakened the dollar. Grant was advised that a veto would hurt Republicans in the upcoming mid-term elections, but Grant believed the bill would destroy the credit of the nation. He vetoed it despite their objections. Grant's veto further alienated him from the more agrarian sectors in the nation. Grant asked Congress for a bill to further strengthen the dollar by gradually reducing the number of greenbacks in circulation.

When the midterm elections took place, the panic and poor economy resulted in a loss of Republucan control of the House of Representatives. Democrats took control of a chamber of Congress for the first time since the start of the Civil War. Republicans retained a majority in the Senate, mainly because Senators were still appointed by State legislatures and Republicans still controlled most of those. The Democrats managed to gain 14 seats in the Senate, but the Republicans still held a 42 to 28 majority. The election increased Democratic power in the South, where the party would go on to dominate politically after the end of Reconstruction.

When the Democrats gained a majority in the House after the 1874 elections, the lame-duck Republican Congress was able to pass some pof Grant's legislation before the Democrats took office. On January 14, 1875, Grant signed the Specie Payment Resumption Act, which required gradual reduction of the number of greenbacks allowed to circulate and declared that they would be redeemed for gold beginning on January 1, 1879. 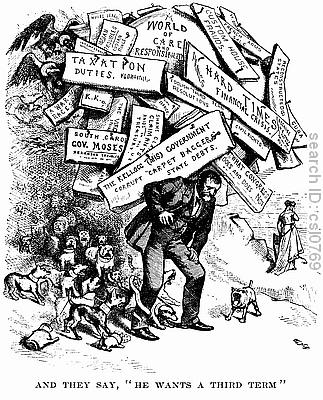 The election marked the first occurrence of a political phenomenon known as the "six-year itch," which the president's party loses many Congressional seats during the president's second mid-term election. Democrat Bill Clinton is the only two-term president since Reconstruction not to have this occur.
Collapse