On January 5, 1933 (89 years ago today) John Calvin Coolidge Jr., the 30th President of the United States, died at his home in Northampton, Massachusetts (known as "the Beeches") from coronary thrombosis. He was 60 years old. 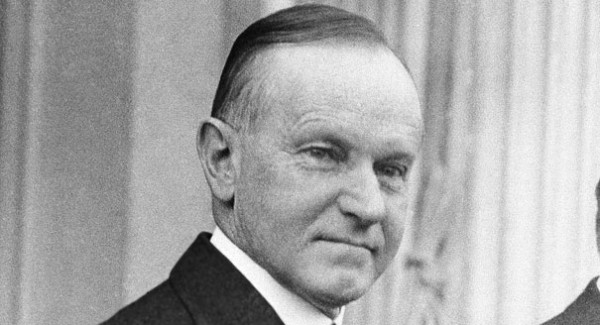 Born in Plymouth Notch, Vermont on the 4th of July in 1872, Coolidge became a lawyer and moved to Northampton to practice law. He worked his way up the ladder of Massachusetts city and state politics, becoming city solicitor, state legislator, mayor of Northampton, lieutenant-governor and eventually becoming governor of that state. His conduct during the Boston Police Strike of 1919 thrust him into national prominence, leading to his selection to the second spot on the GOP ticket in the 1920 presidential election. He was elected as the 29th Vice President in 1920 and succeeded to the Presidency upon the sudden death of Warren Harding in 1923. Elected in his own right in 1924, he gained a reputation as a small-government conservative, and also as a man of few words.

Coolidge restored public confidence in the White House after the scandals of his predecessor's administration, and left office with considerable popularity. Assessments of his presidency are divided between those who approve of his reduction in the size of government and those who believe the federal government should be more involved in regulating and controlling the economy.

Coolidge spoke in favor of the civil rights of African Americans and of Catholics. In 1924, when he received a letter from a letter from a prominent citizen which claimed the United States was a "white man's country", Coolidge responded "I was amazed to receive such a letter. During the war 500,000 colored men and boys were called up under the draft, not one of whom sought to evade it. As president, I am one who feels a responsibility for living up to the traditions and maintaining the principles of the Republican Party. Our Constitution guarantees equal rights to all our citizens, without discrimination on account of race or color. I have taken my oath to support that Constitution." Coolidge also signed the Indian Citizenship Act, which granted full U.S. citizenship to all American Indians, while permitting them to retain tribal land and cultural rights. He repeatedly called for anti-lynching laws to be enacted, but Congressional attempts to pass this legislation were filibustered by Southern Democrats. 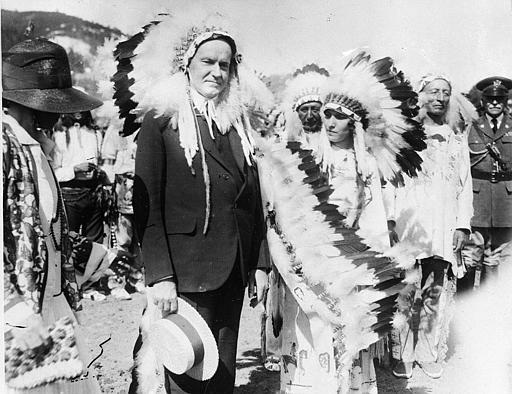 After his presidency, Coolidge retired to Northampton where be built a home known as "The Beeches". He often went boating on the Connecticut River and he also served as chairman of the non-partisan Railroad Commission, as honorary president of the American Foundation for the Blind, as a director of New York Life Insurance Company, as president of the American Antiquarian Society, and as a trustee of Amherst College. He received an honorary Doctor of Laws from Bates College in Lewiston, Maine.

Coolidge published his autobiography in 1929 and wrote a syndicated newspaper column called "Calvin Coolidge Says", from 1930 to 1931. When some Republicans realized that the defeat of Herbert Hoover looked like a certainty in the 1932 presidential election, they tried to draft Coolidge to run, but Coolidge made it clear that he was not interested in running again, and that he would publicly repudiate any effort to draft him. He supported Hoover in the election campaign and made several radio addresses in support of him. (He did so despite the fact that he didn't like Hoover much. He one told a confidant, "Hoover has given me much unsolicited advice, all of it bad.") 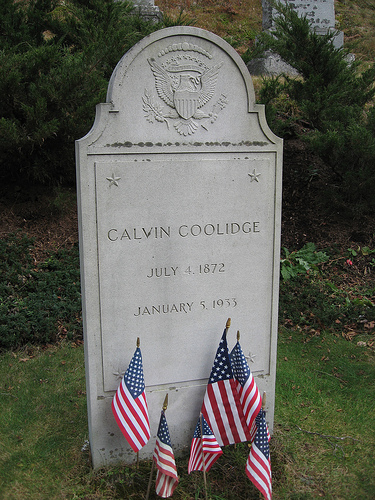 Coolidge died suddenly from coronary thrombosis at The Beeches at 12:45 p.m. January 5, 1933. He is buried beneath a simple headstone in Notch Cemetery, in Plymouth Notch, Vermont, where the family home is maintained as one of the original buildings on the site, all of which comprise the Calvin Coolidge Homestead District. The State of Vermont dedicated a new visitors' center nearby to mark Coolidge's 100th birthday on July 4, 1972.

Calvin Coolidge became President of the United States on August 2, 1923, following the unexpected death of Warren Harding. The nation initially was unsure what to make of Coolidge, who had maintained a low profile as Vice-President in the Harding administration, and many Republicans weren't even sure if they wanted him to be their candidate for re-election 1in 1924. Coolidge faced a potential challenge for his party's nomination from Pennsylvania Governor Gifford Pinchot, a progressive who had been a close friend of Theodore Roosevelt. Pinchot gained national notoriety by settling the 1923 United Mine Workers coal strike, but this proved to be politically disadvantageous, as Pinchot was soon after blamed for rising coal prices. Other potential opponents like Governor Frank Lowden of Illinois and General Leonard Wood failed to generate much support, and Coolidge gained a boost when automobile giant Henry Ford endorsed him for president in December 1923. At the Republican Convention, held from June 10–12, 1924, in Cleveland, Coolidge was nominated on the first ballot. 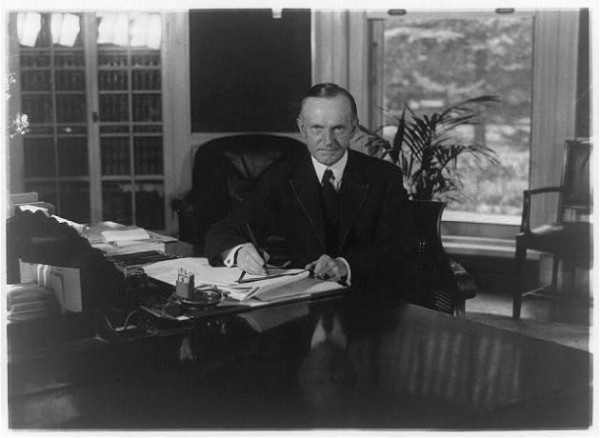 The Democrats were disorganized and divided and their convention took 103 ballots before the delegates finally agreed on a little-known compromise candidate, lawyer John W. Davis of West Virginia. Robert LaFollette, a Republican senator from Wisconsin, split from the GOP to form a new Progressive Party. Coolidge's political ambitions took a back seat when his 16 year old son Calvin Jr. died from an infection from a blister he received playing tennis. Coolidge became withdrawn and depressed, and later said that when his son died, "the power and glory of the Presidency went with him."

Although the Republicans had been tarred by several scandals uncovered from the Harding administration, Coolidge and Dawes ended up winning every state outside the South except Wisconsin, La Follette's home state. Coolidge won 54 percent of the popular vote, while Davis took just 28.8 percent and La Follette won 16.6 percent, one of the strongest third-party presidential showings in U.S. history. In the concurrent congressional elections, Republicans increased their majorities in the House and Senate.

During Coolidge's presidency, the United States experienced a period of rapid economic growth that became known as the "Roaring Twenties." Unemployment was low, while the country's gross domestic product rose from $85.2 billion in 1924 to $101.4 in 1929. The number of automobiles in the United States increased from 7 million in 1919 to 23 million in 1929, and the percentage of households with electricity rose from 16 percent in 1912 to 60 percent in the mid-1920s. Coolidge believed that promoting the interests of manufacturers was good for society as a whole. He worked to reduce taxes and regulations on businesses while imposing tariffs to protect those interests against foreign competition. He also was able to reduce government spending and he was able to reduce government debt by 25%, a record unequalled by any president since.

One of the issues that cost Coolidge support was his opposition to farm subsidies. Farm incomes had declined significantly after World War I and many farmers were unable to sell their crops because of increasing competition on world markets and the introduction of tractors, which increased the productivity of individual farmers and opened up farmland that had previously been devoted to growing crops used for feed for farm animals. The farm crisis was a major political issue throughout the 1920s as farmers remained a powerful voting bloc despite the rising tide of urbanization.

After the 1924 elections, the Coolidge administration introduced an agricultural plan that emphasized agricultural cooperatives to help control prices. Farmers hated the idea. In Congress, the McNary–Haugen Farm Relief Bill proposed the establishment of a federal farm board that would purchase surplus production in high-yield years and hold it for later sale or sell it abroad. The plan meant that the government would lose money in selling the crops abroad, but the program would offer relief to farmers who would otherwise be unable to sell their crops. Coolidge opposed McNary-Haugen. He said that agriculture must stand "on an independent business basis." The bill was defeated in 1924 and 1925, but remained popular among farmers.

A decline in cotton prices in 1925 raised the possibility of a coalition between Southern congressmen and Western congressmen in supporting a major agricultural bill. Coolidge lobbied support against the bill and instead supported the Curtis-Crisp Act, which would have created a federal board to lend money to farm co-operatives in times of surplus, but that went nowhere in Congress. Coolidge had lost support and it would cost him in the upcoming midterm elections.

In November of 1926 the Republicans lost support in both houses of Congress. In the Senate they lost 7 seats to the Democrats, but were able to retain control of the Chamber, by a narrow margin of 49-46. (They had held 56 seats before the election compared to 39 for the Democrats.) The Republicans lost senate seats in Arizona, Missouri, Kentucky, Oklahoma, Maryland and New York.

In the House of Representatives, the Republicans lost only 9 seats, dropping from 247 to 238, but the Democrats gained 11 seats (picking up 2 seats from third parties) going from 183 seats to 194. Democratic support was strongest in southern states, and they gained the most seats in two rural states: Nebraska and Missouri. Although Coolidge's stance opposing aid to farmers had cost him some support, the strong economy lessened the impact of that lost support. 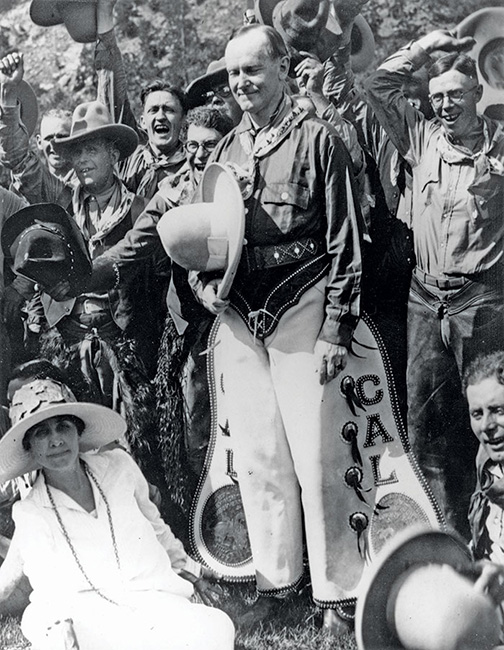 In February 1927, Congress took up the McNary-Haugen bill again, this time narrowly passing it. Coolidge vetoed it. In his veto message, Coolidge said that in his opinion the bill would do nothing to help farmers, benefiting only exporters and expanding the federal bureaucracy. Congress lacked support to override the veto, but tried to pass the bill again in May 1928, this time by an increased majority. Once again, Coolidge vetoed it. He hadn't changed his mind on the issue. He said, "Farmers never have made much money. I do not believe we can do much about it."
Collapse