Barack Obama won the 2008 Presidential Election decisively, winning almost 53% of the popular vote and 365 of the 538 electoral votes. The victory was the result in part of Obama's personal charisma, but more so the result of dissatisfaction with incumbent government's handling of the economy (which led to the sub-prime mortgage crisis and its resulting recession) as well as fatigue from the nation's involvement in two ongoing wars, one of which became very unpopular. Once in power, Obama decided to spend his political capital on what had been a longstanding goal and a centerpiece of his presidential campaign: a national healthcare program. 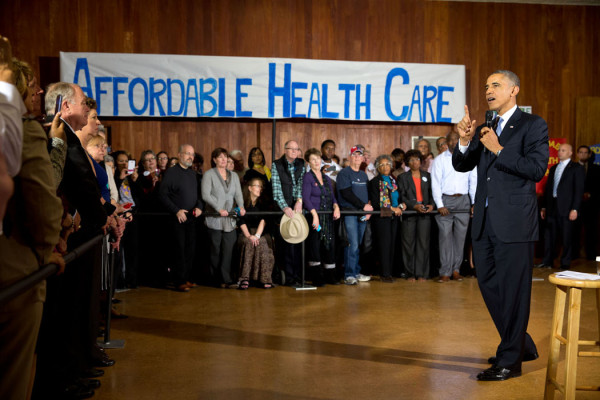 One of the first and most prominent actions of Obama's first 100 days was the passage of the American Recovery and Reinvestment Act (ARRA), a measure intended to address the Great Recession that the nation was still embroiled in, at a cost of $787 billion. ARRA was passed by both the House and Senate on February 13, 2009. It was originally anticipated that it would be a bipartisan bill, but Congressional passage of the bill relied largely on Democratic votes. Only three Republican Senators voted for the bill. It was a dire warning of the gridlock and polarized partisanship that was to come, something which continued throughout Obama's presidency.

The ARRA was enacted in February 2009. With that out of the way, health care reform became Obama's top domestic priority. It had also long been a priority of the Democratic Party. But Obama vowed not to make the mistakes that Bill Clinton had made in 1993. Instead he adopted a strategy of letting Congress drive the process, presumably hoping that this would stand a better chance of attracting bipartisan support. Both the House of Representatives and the Senate wrote their own bills. In the Senate, a bipartisan group of Senators on the Finance Committee known as the Gang of Six began meeting with the hope of creating a bipartisan healthcare reform bill, though the Republican Senators involved in the drafting of the bill ultimately would vote against it.

In November 2009, the House of Representatives passed the Affordable Health Care for America Act on a 220–215 vote. Only one Republican voted for the bill.In December 2009, the Senate passed its own health care reform bill, the Patient Protection and Affordable Care Act (PPACA or ACA), on strictly a party-line. The bill passed by a 60–39 margin. Both bills expanded Medicaid and provided health care subsidies. They also established an individual mandate, health insurance exchanges, and a ban on denying coverage based on pre-existing conditions. The House bill also included a tax increase on families making more than $1 million per year and a public health insurance option, while the Senate plan included an excise tax on high-cost health plans.

In 2010 Massachusetts held a Senate special election to fill the vacancy left by the death of Senator Ted Kennedy. In a surprise upset, the seat was won by a Republican, Scott Brown. As a result, Democrats lost their 60-seat Senate super-majority. The White House and House Speaker Nancy Pelosi tried to lobby both centrists and liberals in the House to pass the Senate's health care bill, the Patient Protection and Affordable Care Act. In March 2010, the House passed the Patient Protection and Affordable Care Act, but only after President Obama announced an executive order continuing the current law against spending federal funds for elective abortion services. The bill did not receive a single Republican vote in either house. On March 23, 2010, President Obama signed the PPACA into law.

The bill met with opposition both from the left (for not going far enough) and from the right (where it was portrayed as socialist legislation.) The New York Times even described the PPACA as "the most expansive social legislation enacted in decades." The Patient Protection and Affordable Care Act became colloquially known as "Obamacare."

When the mid-term elections were held in November of 2010, Obamacare was one of the key issues. Candidates and voters in 2010 were also focused on national economic conditions as the nation struggled to recover from the great recession. Public anger persisted over the Wall Street bailout signed into law by President George W. Bush in late 2008. Voters were also motivated to get out and vote because of their support for or opposition against the sweeping reforms of the health care system enacted by Democrats in 2010. Many were also concerned about record deficits. At the time of the election, unemployment was over 9%, and had not declined significantly since Obama had become President. Approval ratings for Congress in general were dipping to unprecedented lows following a series of scandals that saw Democratic Representatives Charlie Rangel and Maxine Waters, and Republican Senator John Ensign, all accused of unethical or illegal conduct in the months leading up to the 2010 election.

A populist movement known as the Tea Party was a vocal force in mobilizing voters for Republican candidates nationwide. Their widespread exposure in the media focused national attention in the election on economic issues. Another issue was immigration reform, especially after the passage of Arizona Senate Bill 1070, officially known as the Support Our Law Enforcement and Safe Neighborhoods Act. The Act strengthened the power of Arizona's law enforcement agencies to investigate the immigration status of suspected illegal immigrants and to enforce state and national immigration laws. The Act also required immigrants to carry their immigration documentation on their person at all times. It was passed by a Republican-led legislature and its publicized signing by Arizona's Republican Governor Jan Brewer led to protests across the Southwest. It increased political activism among both pro-immigration Latino groups and Tea Party activists.

The passage of the PPACA remained controversial and also contributed to the low approval ratings of Congress, particularly Democrats, in the months leading up to the election. Many Republicans ran on a promise to repeal the law, a tactic which proved effective in many cases against incumbent Democratic opponents who had voted in favor of the bill.

The mid-term elections resulted in significant gains for the Republican party, though not enough to retake control of both houses of Congress. In the Senate, Republicans gained six seats resulting in 51 Democrats, 47 Republicans and 2 Independents. Republicans regained control of the House of Representatives, picking up a net total of 63 seats. After the election they held 242 seats compared to 193 for the Democrats. The 2010 election resulted in the highest losses by a party in a House midterm election since 1938, and the largest House swing since 1948. Ohio Congressman John Boehner became Speaker of the House of Representatives. 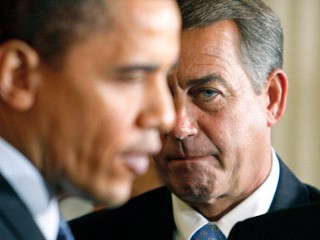 President Obama called the election results "humbling" and described them as "a shellacking." He attributed the defeat to the economy, arguing that the loss came because not enough Americans had felt the effects of the economic recovery. With their new power, House Republicans quickly confronted the president on Obamacare and on the debt ceiling. The new majority would also lead to increased political polarization and a significant diminishment in bipartisanship.
Collapse