In November of this year, mid-term elections will be held. Presently, the Democratic Party holds a majority in the US Senate and in the House of Representatives, but according to those able to read the political tea leaves, that is expected to change following the mid-term elections, when the Republican Party is expected to take control of both houses of Congress. Is that result inevitable, and if it takes place, what is its significance? To consider these questions, this month we will look at the history of previous mid-term elections and how they changed the course of history. Today we begin with one of the more famous mid-terms of recent memory, the so-called Republican Revolution of 1994. 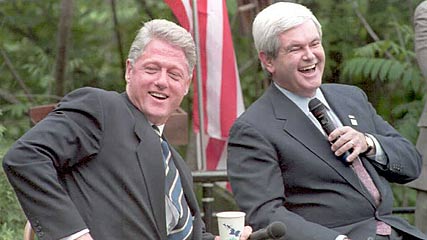 The Republican Revolution, sometimes also called the "Gingrich Revolution," was a term used to refer to the Republican Party's huge success in the 1994 U.S. mid-term elections, in which the party ended up with a net gain of 54 seats in the House of Representatives, and a pick-up of 8 seats in the Senate. The Republican majority grew even larger when, on November 9, 1994, the day after the election, Senator Richard Shelby of Alabama, a conservative Democrat, changed parties and joined the Republican Party. Later, on March 3, 1995, Colorado Senator Ben Nighthorse Campbell also switched from the Democrats to the Republican side, increasing the GOP Senate majority.

Democratic President Bill Clinton had won a stunning upset victory over the once popular George H. W. Bush in the 1992 Presidential Election. But a series of controversies caused a drop in Clinton's approval rating down to 37% in mid-1993. These included a debate over allowing gays and lesbians to serve openly in the US military (and Clinton's reneging on a campaign promise to lift the ban if elected), contentious confirmation battles over some of Clinton's appointments to his cabinet and to other top level government posts, and a minor scandal known as "Travelgate" in May 1993, when seven employees of the White House Travel Office were fired because of alleged financial improprieties in the Travel Office and replaced with friends of the Clintons. Media attention forced the White House to reinstate most of the fired employees and remove the Clinton associates from the travel role. Clinton's popularity also suffered because of his administration's failure in his ambitious national health care program and other foreign policy problems, which left Clinton in a weak position in the lead-up to the 1994 elections.

Republican House Leader Newt Gingrich led his fellow House Republicans to create what they called the Contract with America, a promised program, which proposed an overhaul of the federal welfare system, passage of a balanced budget amendment, term limits, and deregulation. Rather than campaigning independently in each district, Republican candidates chose to rally behind this Contract. They also accused Clinton of not being the centrist "New Democrat" he claimed to be during his 1992 campaign, but rather a "tax and spend" liberal.

The strategy was a huge success for Republicans. The party won control of both chambers of Congress, and the victory gave Republicans unified control of Congress for the first time since 1955, causing many political commentators to dub the 1994 elections as the "Republican Revolution." Republicans had not held the majority in the House for 40 years, since the 83rd Congress (elected in 1952).

Large Republican gains were made in state houses as well when the GOP picked up 12 gubernatorial seats and 472 legislative seats. As a result, the party took control of 20 state legislatures from the Democrats. Prior to this, Republicans had not held the majority of governorships since 1972. This was also the first time in 50 years that the GOP controlled a majority of state legislatures.

The trend was foreshadowed by GOP victories in 1993, when Republicans won the mayoralties of New York and Los Angeles. That same year, Christine Todd Whitman won the New Jersey governorship and Bret Schundler became the first Republican mayor of Jersey City, New Jersey, which had been held by the Democratic Party since 1917. Republican George Allen won the 1993 Virginia gubernatorial election, and Texas Republican Kay Bailey Hutchison won a U.S. Senate seat from the Democrats in the 1993 special election. Republicans also picked up three congressional seats from Democrats in Oklahoma and Kentucky in May 1994.

After Republicans took control of Congress in the 1994 elections, Gingrich became Speaker of the House. He promised a conservative "revolution" that would implement tax cuts, welfare reform, and major domestic spending cuts. With conservatism on the rise and New Deal liberalism in retreat, Clinton assessed his position and sought to forge a new consensus. Following his party's electoral defeat, Clinton hired consultant Dick Morris, who advocated that Clinton pursue a policy seeking to find common ground between conservative Republicans and liberal Democrats. Morris advised Clinton to co-opt some of Republican ideas in order to boost his own popularity while preventing many of the drastic reforms advocated by Gingrich and other conservatives.

The Republican Congress presented Clinton with a budget plan that cut Medicare spending and instituted major tax cuts for the wealthy. Clinton was given a November 14, 1995 deadline to approve the bill. In response, Clinton presented his own plan that did not include spending cuts to Medicare but which promised a balanced budget by 2005. When Clinton refused to sign the Republican bill, major portions of the government suspended operations until Congress enacted a stopgap measure. The government shut down again on December 16 after Clinton vetoed a Republican budget proposal that would have extended tax cuts to the wealthy, cut spending on social programs, and shifted control of Medicaid to the states. After a 21-day government shutdown, Republicans assessed the political popularity or lack thereof in their own position and accepted Clinton's budget. 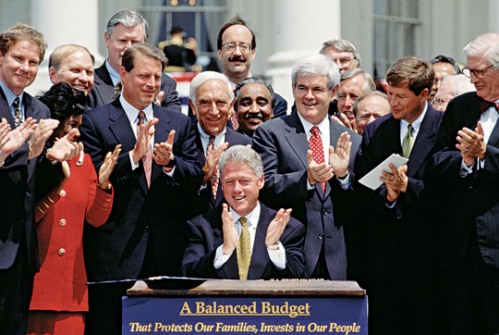 Shortly after the end of the government shutdown, Clinton announced his plan to pursue major changes to the Aid to Families with Dependent Children (AFDC) program, which provided financial assistance to low-income families with children. Clinton argued that the program inadvertently trapped many poor families and individuals in a cycle of poverty, and he favored shifting funding into job training and child care programs. It was an area on which he was able to compromise with Republicans, who were also calling for making major changes to the welfare system, though they were unwilling to fund the job training programs. The Republicans also wanted to prevent legal immigrants from receiving welfare benefits. After twice vetoing Republican proposals, Clinton ultimately decided that the Republican reform plan was better than no reform at all. In July 1996, Clinton signed the Personal Responsibility and Work Opportunity Act, which terminated the AFDC program, and in its place created the Temporary Assistance for Needy Families (TANF) program, which imposed new work requirements for and lifetime limits on aid recipients. It also shifted responsibility for the administration of the programs to the states.
Collapse