The legacy of Andrew Jackson is now seen by most historians as mixed as best. Jackson is praised as a protector of popular democracy, as someone who took government out of the hands of the aristocracy and gave it to the ordinary citizen. But today, in these more enlightened times, Jackson is criticized for his support for slavery and for his part in Indian removal. Jackson became a successful lawyer and local politician. He also prospered as a slave owner, planter, and merchant. He built a home and the first general store in Gallatin, Tennessee in 1803, and in 1804 he acquired the Hermitage, a 640 acre plantation in Davidson County, near Nashville, Tennessee. The Hermitage eventually grew to 1,050 acres. Its primary crop was cotton, grown by slave labor. He began with nine slaves, increased that number to 44 by 1820, and later had up to 150 enslaved persons. Throughout his lifetime Jackson may have owned as many as 300 slaves.

In December of 1817, Jackson was ordered by President James Monroe to lead a campaign in Georgia against the Seminole and Creek Indians. Jackson was also charged with preventing Spanish Florida from becoming a refuge for runaway slaves. Jackson was ordered to "terminate the conflict." He believed the best way to do this was to seize Florida. Jackson wrote to Monroe, "Let it be signified to me through any channel that the possession of the Floridas would be desirable to the United States, and in sixty days it will be accomplished." Monroe purposely gave Jackson ambiguous orders so as to maintain what would later be called "plausible deniability".

As President Jackson never had to deal with the issue of slavery directly. One wonders what Jackson would have done had been in the position of Abraham Lincoln because, although he was a slaveholder and a supported of the institution of slavery, he was also a strong union man, who threatened to hang any southern leader who tried to lead a secession movement. Even in retirement, he declined to support any talk of secession.

The most controversial aspect of Jackson's presidency was his treatment of Native Americans, which some have labelled as "ethnic cleansing." Jackson was a leading advocate of their removal. In his December 8, 1829, First Annual Message to Congress, Jackson said:

"This emigration should be voluntary, for it would be as cruel as unjust to compel the aborigines to abandon the graves of their fathers and seek a home in a distant land. But they should be distinctly informed that if they remain within the limits of the States they must be subject to their laws. In return for their obedience as individuals they will without doubt be protected in the enjoyment of those possessions which they have improved by their industry."

Following his election, Jackson signed the Indian Removal Act into law in 1830. The Act authorized the President to negotiate treaties to buy tribal lands in the east in exchange for lands further west, outside of existing U.S. state borders. The removal plan was opposed by some northern politicians, but was popular in the South, where population growth and the discovery of gold on Cherokee land made the policy a popular one. The Cherokees sought a remedy in the courts by suing the in the 1832 U.S. Supreme Court decision of Worcester v. Georgia. In that case, the court held that Georgia could not impose its laws upon Cherokee tribal lands. Referring to the Chief Justice of that court, Jackson is often quoted as having said, "John Marshall has made his decision, now let him enforce it!" Whether he said that or not is disputed, but it certainly is a sentiment he endorsed. He refused to allot any Federal resources to enforce the court's decision. Jackson used the Georgia crisis to pressure Cherokee leaders to sign a removal treaty. A small faction of Cherokees led by John Ridge negotiated the Treaty of New Echota with Jackson's representatives, even though Ridge was not a recognized leader of the Cherokee Nation. The treaty was rejected by most Cherokees as illegitimate. Over 15,000 Cherokees signed a petition in protest of the proposed removal; the list was ignored by the government.

The treaty was enforced by Jackson's successor, Martin Van Buren, who ordered 7,000 armed troops to remove the Cherokees. This abrupt and forced removal resulted in the deaths of over 4,000 Cherokees on the "Trail of Tears".

More than 45,000 Native Americans were relocated to the West during Jackson's administration. Jackson's administration bought about 100 million acres of land from their leadership for about $68 million and 32 million acres of western land. Jackson was criticized at the time for his role in these events, and the criticism has grown over the years. Noted Historian Robert Remini called the Indian Removal era as "one of the unhappiest chapters in American history."

Bob Woodward will forever be remembered as one of two Washington Post reports to break the Watergate scandal, and since then he has written twenty books about presidents and national politics. Robert Costa is also a Washington Post reporter with a background in television news journalism as well. Together they have written a superb chronicle of the last days of the Trump Presidency, the 2020 US Presidential Election and the first months of the Biden Presidency simply entitled Peril. 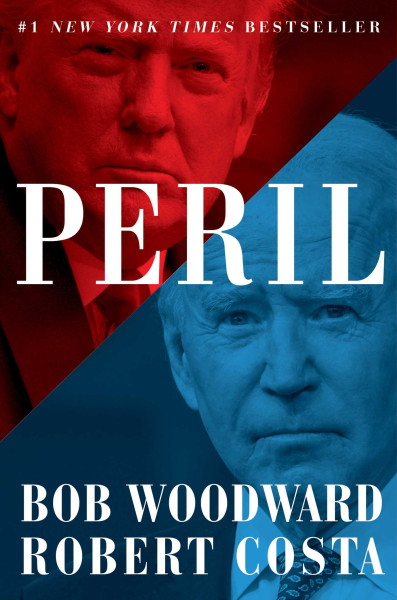 Starting with Joe Biden's decision to enter the race for the 2020 Democratic Presidential Nomination, the book explores Biden's consideration of his decision, the factors which led the former Vice-President to ultimately enter the race, how his campaign themes and strategies came about, and how Biden remained firm in his course even after early defeats in the Iowa caucuses and the New Hampshire primary. The book also follows President Donald Trump along a parallel path, starting with the early controversies of his Presidency (especially his response to the "Unite the Right" rally), continuing to the Covid-19 pandemic and how the unexpected development upended the President's plans to seek re-election on the strength of a healthy economy. The book follows both men as each are forced to campaign in the new pandemic paradigm, one from his home, the other at "super-spreader events", and how each addressed the controversial results that followed from this past election's unprecedented large numbers of mail-in voting and the Trump campaign's accusation of massive voter fraud.

The book next looks at one of the most unusual and fascinating transition periods in presidential history: the Trump campaign's unsuccessful and sometimes farcical attempts to challenge the election results through litigation, Biden's attempt at a presidential transition without his predecessor's admission of defeat, ultimately leading up to the January 6th Capitol Riots and each candidate's role leading up to them and in their aftermath.

The last portion of the book deals with the first months of the Biden Presidency and takes the reader behind the scenes of the major events, including the Biden stimulus package and its rocky road through Congress, Biden's testy dealings with Vladimir Putin, and his decision to withdraw troops from Afghanistan, looking at both justification for the decision as well as its consequences. The authors also look at the maneuverings of the Republican Party and of Donald Trump in preparation for the 2022 mid-term elections and for a potential bid for a second term as President for Donald Trump.

The book is fascinating for its portrayal of many of the supporting characters, many of whom were no doubt sources for the detailed conversations that the authors attest to be "deep background" (sourced by those present when these conversations took place.) These include General Mark Milley - Chairman of the Joint Chiefs of Staff, who saw his duty as maintaining the peaceful transfer of power after the election, avoiding a potential coup d'etat; Ron Klain, Biden's Chief of Staff, who the authors imply to be a major power broker in the Biden administration, more so than one might expect; Vice President Mike Pence and Attorney-General William Barr, who resist great pressure from the President, who wants them to refuse to certify electoral college votes; Senator Lindsay Graham, the moderate Republican who tries to act as Trump's Jiminy Cricket by unsuccessfully convincing him to let go of the resentment of the "stolen" election; and Senator Joe Manchin, the right of center Democrat from West Virginia whose principled opposition to portions of Biden's relief bill nearly upset the apple cart in a Democratic Party precariously divided between centrists and progressives. These are only some of the fascinating characters in the Trump and Biden orbit whose trials and tribulations are explored, generally in a sympathetic manner. After all, these are complex issues on which principled people can disagree. There are generally no easy answers to what these people must confront.

The book is fascinating in the details it reveals. It is incredible how much the authors are told by their sources, and in some cases this is troubling. For example, for General Milley to reveal a transcript of his conversation of a conversation with his Chinese counterpart makes one wonder. If reporters can ferret out top secret military information from the highest reaches of the Pentagon, how easy can it be for the nation's enemies to do so, especially given their ability to present more lucrative incentives?

For the most part, the authors write in a non-judgemental fashion as they tell their story, though a number of undertones soon become clear. These include:

1) Republicans like Mitch McConnell and Lindsay Graham face a dilemma. The are close to winning back control of both Houses of Congress in the next election, but need Trump's support to ensure this happens. They also realize that Trump's narcissism and volatility makes him a liability and these two factors are difficult to reconcile. They feel they can't win without him, but winning with him has more that its share of problems.

2) While Biden brings a wealth of experience in government, his staff can be controlling and undermining at times, especially his Chief of Staff, who the authors suggest badly hampered Biden's efforts to negotiate with moderate Republicans and injured Biden's ability to be taken at his word when negotiating with his former colleagues. The authors also suggest that Biden's staff eavesdrop on his private phone calls without his prior approval.

3) The authors fear a coming "Trump revolution", which is the "peril" that they allude to in the book's title. They even go so far as to compare the January 6th Capitol Riots to the unsuccessful 1905 revolution in Russia, which Lenin referred to as the "dress rehearsal" for the successful 1917 Russian Revolution. The authors write: "Could Trump work his will again? Are there any limits to what he and his supporters might do to put him back in power? Peril remains." 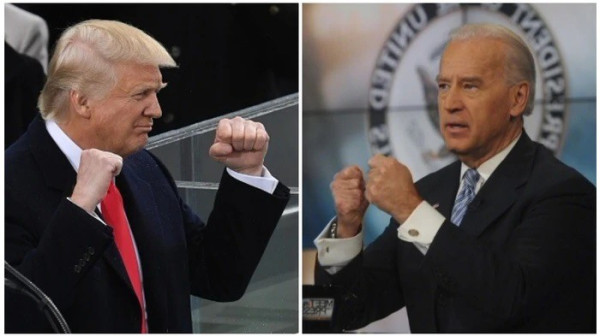 The book is an excellent chronicle of recent history, one which seems to accurately set out the mood of the times. Time will tell whether the peril it portends is melodrama or prescience.
Collapse