Books can and have been written on the subject of Thomas Jefferson and slavery, and what in our time now appears to be a glaring contradiction. On the one hand Jefferson was a world-famous advocate of liberty. On the other hand , he owned a 5,000-acre plantation called Monticello and "owned" hundreds of human beings in slavery during his lifetime. He relied on slavery to support his lifestyle. Jefferson's believed that African Americans were inferior to whites and needed supervision. He strongly opposed to the slave trade, and as president, in 1806 Jefferson successfully called on Congress to pass legislation to end the slave trade, which he signed into law. Most historians now believe that, as a widower, Jefferson had a "shadow family". He had an intimate relationship with his mixed-race slave Sally Hemings which lasted for 38 years. He had four surviving children with her. As they were seven-eighths European in ancestry, they were legally considered to be white even though they were born into slavery. He formally freed seven male slaves, though only two in his lifetime (his oldest son and daughter Beverly and Harriet Hemings). In 1826, he freed five male slaves in his will, including two of his sons, Madison and Eston Hemings. The remaining 130 slaves at Monticello were sold in 1827 to pay the debts of Jefferson's estate.

Jefferson's father Peter Jefferson was a prominent slaveholder and land speculator in Virginia, who died suddenly in 1757, leaving the eleven-year-old Thomas a large estate. When Jefferson turned 21, he received 52 slaves that he used to construct his mansion known as Monticello. In 1769, while serving in the Virginia House of Burgesses, he proposed laws that severely restricted free blacks from entering or living in Virginia and authored legislation that would have banished children whose father was of African origin and exiled any white woman who had a child with a black man. Jefferson suggested that any free black found in violation of the laws would be in jeopardy of the lynch mob. The proposed laws failed to pass according to one historian "because they were excessively restrictive even for Jefferson's times."

In 1769, Jefferson advertised in the Virginia Gazette, offering a reward up to 10 £, for the capture of his 35-year-old runaway male shoemaker slave named "Sandy". The ad said Sandy was left handed, not very tall, and "light skinned", cunning, an alcoholic, and when drinking could be violent. In 1770, as a lawyer, Jefferson unsuccessfully defended a young male slave in Virginia who sued for freedom on the grounds that his mother was white and freeborn. In another case in 1772, Jefferson represented George Manly, the son of a free woman of color, suing to secure his freedom after having been held as an indentured servant three years past the expiration of his term.

In 1772, Jefferson married Martha Wayles, whose father died the following year. She and Jefferson inherited his estate, including 135 slaves, giving Jefferson held the second highest number of slaves in Albermarle County, Virginia. He sold some of them to pay off the Wayles' estate's debt.

In 1775, Thomas Jefferson joined the Continental Congress as a delegate from Virginia. British governor Lord Dunmore tried to reassert British authority by issuing a Proclamation in November 1775 which offered freedom to slaves who abandoned their rebel masters and joined the British army. Jefferson and other colonials saw Dunsmore's action as an attempt to incite a massive slave rebellion, and opposed it. In 1776, when Jefferson co-authored the Declaration of Independence, he wrote, "He has excited domestic insurrections among us." Jefferson did not condemn slavery in the Declaration, but he condemned the King for "inciting American Negroes to rise in arms against their masters".

In 1778 Jefferson supported the Virginia General Assembly's ban on importing slaves into Virginia. It was one of the first jurisdictions in the world to ban the slave trade, and all other states eventually followed. As governor of Virginia during the Revolution, Jefferson signed a bill to promote military enlistment by giving white men land, "a healthy sound Negro...or £60 in gold or silver." He brought some of his household slaves to serve in the Governor's mansion. In January 1781, Jefferson fled the capital and left his slaves behind as British forces invaded. Several slaves, including Mary Hemings, were taken by the British as prisoners of war, and later released in exchange for British soldiers.

As U.S. Secretary of State, Jefferson issued $40,000 in emergency relief and 1,000 weapons to colonial French slave owners in Saint Domingue (Haiti) in order to suppress a slave rebellion. President George Washington gave the slave owners in Saint Domingue (Haiti) $400,000 as repayment for loans they had granted to the Americans during the American Revolutionary War. In 1800 when Jefferson became President, he was aided by the South's having slaves counted in the total population as 3/5ths persons, as written in the Constitution. This increased the electoral votes controlled by the Southern states. Jefferson became President because of this advantage, and would have lost without it. 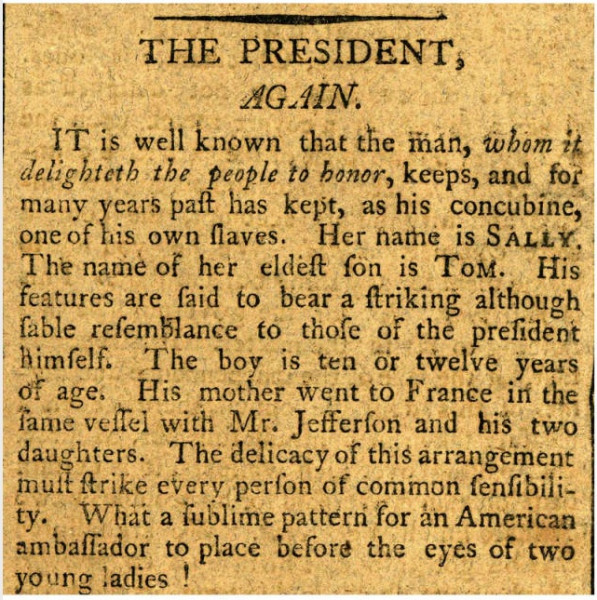 Like other slave-owning presidents, Jefferson brought some of his slaves to work in the White House. Jefferson's slaves worked and lived in the White House, and at least one was born there. In September 1802, James Callender, Jefferson's former ally against the Federalist Party, published an account in the Richmond Recorder, that Jefferson had a slave-concubine named Sally Hemings by whom he had several children. Callender had previously been denied the appointment of postmaster of Richmond, Virginia by President Jefferson. The Federalist Party soon picked up this account and published it in their respective papers. Jefferson did not respond to the accusations.

In 1804, as President, Jefferson strongly opposed the slave uprising in Saint Domingue (Haiti) and instituted policies to undermine the new state. Jefferson encouraged the French Emperor Napoleon to attack and recolonize the new Haitian republic and lent France $300,000 "for relief of whites on the island." He wanted to alleviate the fears of Southern slave owners, who feared a similar rebellion. After Napoleon's forces were defeated in Haiti, the US did not offer diplomatic recognition to the new nation.

In March 1807, Jefferson signed a bill ending the importation of slaves into the United States. By 1808, the international slave trade was banned in every state but South Carolina. By that time, with the growth of the domestic slave population, slaveholders did not mount much resistance to the new law. The value of slaves in the US increased as demand rose, and slaveholders such as Jefferson benefited from rising prices. Concern over preventing slave rebellions was a factor for ending the slave trade, as slaveholders found newly imported African slaves were more openly rebellious. Jefferson continued to struggle with debt after serving as President. He used his hundreds of slaves as collateral to his creditors. At his death, Jefferson was greatly in debt, and his family had to sell the slaves from Monticello to pay his creditors. Jefferson freed only five slaves in his will, all males of the Hemings family: Madison and Eston Hemings, the younger sons of Sally Hemings, to be freed at age 21, her half-brother John Hemings, and her nephews Joseph (Joe) Fossett and Burwell Colbert. He freed John Hemings and Joe Fossett, who were each given an acre on Jefferson's lands to build homes for their families. Because Jefferson did not free Fossett's wife or their eight children, they were sold to four different slave owners. Fossett worked for years to buy them back to give them freedom.
Collapse