Washington DC is full of memorials to Presidents, Generals and wars. In this day and age when the nation begins to fully appreciate the how ugly the stain of slavery is on the fabric of its national history, and when government spending has jumped into the trillions of dollars, one might expect that the nation's capitol might have some sort of monument to its first Vice-President, one of its key founding fathers and one who saw the idea of enslavement of one human being by another as inherently evil. Yet the John Adams Memorial remains a proposal and not a realty.

John Adams was a civil libertarian who never bought or owned a slave in his life. He went so far as to declined on principle to employ slave labor. His wife Abigail Adams was also an opponent to slavery, unlike her father who owned two domestic slaves. On occasion she would employed free African-Americans.

It's true that Adams never went so far as to advocate for and end to slavery either before or during his presidency. For example in 1777 as a member of the Continental Congress, Adams opposed a bill to emancipate slaves in Massachusetts. He said that the issue was too divisive at the time, and he recommended that the legislation should "sleep for a time." He was also opposed the use of black soldiers in the US Army, because of opposition from southerners, who feared that arming enslaved African-Americans had potential for insurrection. Adams generally tried to keep deal diplomatically with the issue and avoid it when it came to national politics, because of what he anticipated the southern response would be. For Adams, keeping the nation united against the threat of the British and other enemies was a priority greater than ending slavery.

I have, through my whole life, held the practice of slavery in such abhorrence, that I have never owned a negro or any other slave, though I have lived for many years in times, when the practice was not disgraceful, when the best men in my vicinity thought it not inconsistent with their character, and when it has cost me thousands of dollars for the labor and subsistence of free men, which I might have saved by the purchase of negroes at times when they were very cheap.

Before the war, as a lawyer he sometimes represented slaves in lawsuits for their freedom. But he was consistent about wanting to keep the issue out of national politics, because of the anticipated Southern response during a time when unity was needed to achieve independence. Slavery was abolished in Massachusetts about 1780, when it was forbidden by implication in the Declaration of Rights that John Adams wrote into the Massachusetts Constitution. Abigail Adams was more vocal in her opposition to slavery

As President, Adams' administration steered clear of this issue. He had enough on his plate with relations between the fledgling nation and the European powers of Britain and France. On January 24, 1801, Adams responded to two abolitionists who had sent him an anti-slavery pamphlet by Quaker reformer Warner Mifflin. In the letter, Adams expressed his views on slavery, the dangers posed by abolitionists (who at the time were mostly Quakers and unpopular religious radicals), and emancipation. Of slavery Adams wrote, "my opinion against it has always been known," noting that he has "always employed freemen both as Domisticks and Labourers, and never in my Life did I own a Slave."

In 1800, the Slave Trade Act of 1800 was proposed to Congress and Adams signed it into law on May 10th, 1800. This bill had been passed May 2, 1800, with a title of: "An Act to prohibit the carrying on the Slave Trade from the United States to any foreign place or country." The first clause in the act read:

That it shall be unlawful for any citizen of the United States, or other person residing within the United States, directly or indirectly to hold or have any right or property in any vessel employed or made use of in the transportation or carrying of slaves from one foreign country or place to another, and any right or property, belonging as aforesaid, shall be forfeited, and may be libelled and condemned for the use of the person who shall sue for the same; and such person, transgressing the prohibition aforesaid, shall also forfeit and pay a sum of money equal to double the value of the right or property in such vessel, which he held as aforesaid; and shall also forfeit a sum of money equal to double the value of the interest which he may have had in the slaves, which at any time may have been transported or carried in such vessel, after the passing of this act, and against the form thereof.

In an article in The Journal of Negro History, Volume 49, No. 3, an author writing on this subject summarized Adams' views on slavery as follows:

Slavery never figured prominently in the elder Adams' career. He left public life in 1801 and died in 1826, before slavery became a dominant political issue. John Adams lived long enough however to witness the beginnings of the slavery controversy and to develop serious apprehensions about it. The repugnance of negro slavery seemed to Adams so obvious as hardly to merit argument. The New England society from which he came, full of proud independent farmers, and almost empty of Negroes, found nothing appealing about human bondage. And the principles spoke so heatedly during the revolution, made the notion of American slavery seem all the more reprehensible.

During the greater part of his life however, the matter seldom intruded upon his attention. In their personal lives, he and Abigail were careful to hire free white help as household servants. And later in life Adams recalled with considerable pride that he had never employed slaves on his farm, even when this was acceptable among the best circles of New England society, and in spite of the fact that it meant losses to him both of convenience and economy. Yet throughout his long and eventful public career, slavery drew from him only passing and incidental comment.

With such a comparatively outstanding record in opposing slavery, one wonders why the Adams memorial has never been more than a proposal. The United States Congress authorized the Adams Memorial Foundation to proceed with the design and construction of a memorial on November 5, 2001 and the foundation was authorized to raise private funds to construct a memorial on federal land in Washington, D.C. Once established, the memorial was then to be turned over to the federal government. On December 2, 2002, Congress amended this legislation to permit the Adams Memorial to be constructed within Area 1, the central core of the District of Columbia centered on the National Mall. But the Commemorative Works Clarification and Revision Act of 2003 (CWCRA), however, gave the Adams Memorial Foundation and other memorial efforts then under way just seven years to raise the funds and begin construction. The memorial foundation was unable to raise the funds, so Congress passed legislation on October 30, 2009, giving the Adams Memorial effort until September 30, 2010, to complete its fundraising. Congress extended the deadline for fund-raising yet again on May 24, 2010, giving the memorial until December 2, 2013, to finish its efforts. The recession of 2008 hampered fundraising efforts. 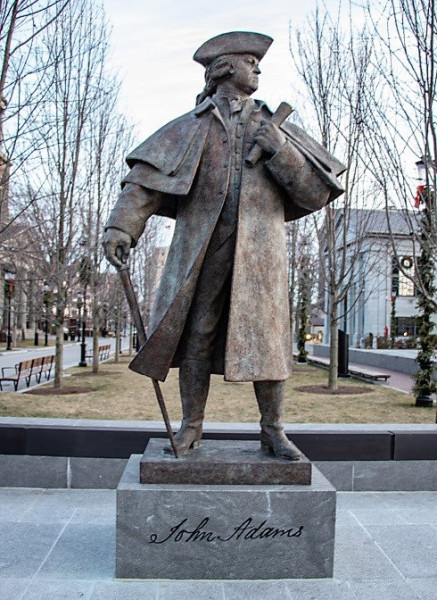 Authorization for the Adams Memorial expired on December 2, 2013, without a memorial having ever begun construction. Congress again reauthorized the memorial on July 22, 2014, extending the deadline to December 2, 2020. Following the continued failure of the foundation to select a location and raise funds, the March 2019 John D. Dingell, Jr. Conservation, Management, and Recreation Act established an Adams Memorial Commission to establish the memorial, with members appointed by Congress and the president. President Donald Trump made just two of four presidential appointments in fall 2020. This far into 2021 the Speaker of the House and Senate President pro tempore have not yet made any of their eight appointments. The commission expires December 2, 2025.
Collapse