Today is President Jimmy Carter's 97th birthday. James Earl Carter Jr.was born on October 1, 1924 at the Wise Sanitarium, in Plains, Georgia. He was the first president to be born in a hospital. 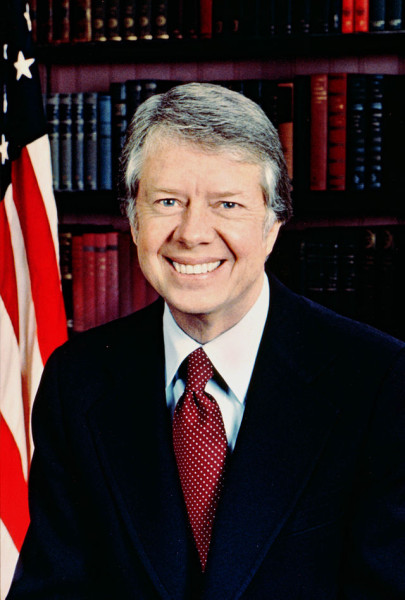 Jimmy Carter is the eldest of four children born to James Earl Carter and the former Bessie Lillian Gordy. Carter's father was a prominent business owner in Plains, and his mother was a registered nurse. At the age if 18, Carter was admitted to the United States Naval Academy in Annapolis, Maryland in 1943. He graduated 59th out of 820 midshipmen at the Naval Academy with a Bachelor of Science degree and he served in both the Atlantic and Pacific U.S. Submarine Fleets. He then attended graduate school majoring in reactor technology and nuclear physics. He served in the US Navy's fledgling nuclear submarine program run by then Captain Hyman G. Rickover. Upon the death of his father James Earl Carter, Sr. in July 1953, Carter left the Navy and returned home to run the family business in 1953, operating a peanut farm. Carter developed an interest in politics and served two terms as a Georgia State Senator and one term as Governor of Georgia from 1971 to 1975.

In 1976 he sought the Democratic Party's nomination for President. He was considered to have little chance of success, but following the Watergate scandal and President Gerald Ford's pardoning of Richard Nixon, Carter's position as a Washington outsider became an asset. Carter became the front-runner early on by winning the Iowa caucuses and the New Hampshire primary. On November 2, 1976 Carter was elected president, winning the popular vote by a margin of 50.1 percent to 48.0 percent for incumbent Gerald Ford, and received 297 electoral votes to Ford's 240.

During Carter's term as President, he created two new cabinet departments: the Department of Energy and the Department of Education. He established a national energy policy that included conservation and price control. In foreign affairs, Carter negotiated the Camp David Accords, the Panama Canal Treaties, the second round of Strategic Arms Limitation Talks (SALT II), and the return of the Panama Canal Zone to Panama. He took office during a period of international stagnation and inflation, which persisted throughout his term. Mortgage interest rates rose to over 20%. The end of his term saw the Iran hostage crisis, the 1979 energy crisis, the Three Mile Island nuclear accident, the Soviet invasion of Afghanistan, the United States boycott of the 1980 Summer Olympics in Moscow and the eruption of Mount St. Helens in Washington state. By 1980, Carter's popularity had eroded. 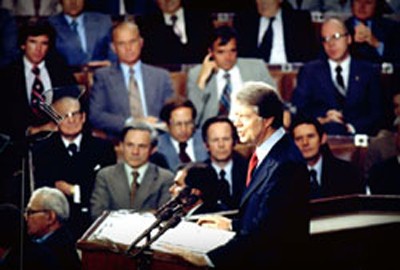 Carter ran for re-election in 1980. He survived a primary challenge from Massachusetts Senator Ted Kennedy for the Democratic Party nomination, but lost the election to Ronald Reagan. On January 20, 1981, minutes after Carter's term in office ended, the 52 U.S. captives held at the U.S. embassy in Iran were released, ending the 444-day Iran hostage crisis.

Following his defeat Carter and his wife Rosalynn founded the Carter Center in 1982, a nongovernmental, non-profit organization that seeks to advance human rights. He has traveled extensively to observe elections, advance disease prevention and eradication in developing nations and work for the Habitat for Humanity project. In 2002, President Carter received the Nobel Peace Prize for the world done by Carter Center, in the words of the Nobel committee, "to find peaceful solutions to international conflicts, to advance democracy and human rights, and to promote economic and social development." Three sitting presidents have received the prize (Theodore Roosevelt, Woodrow Wilson and Barack Obama) but Carter is unique in that he received the award for his actions after leaving the presidency. Carter and Martin Luther King, Jr. are the only two native Georgians to receive a Nobel Prize.

President Carter has had a very busy retirement that has included serving as an Honorary Chair for the World Justice Project, serving as Honorary Chair for the Continuity of Government Commission and he has written many books. On June 16, 2011, the 40th anniversary of Richard Nixon's official declaration of America's War on Drugs, Carter wrote an op-ed in The New York Times urging the United States and the rest of the world to "Call Off the Global War on Drugs". 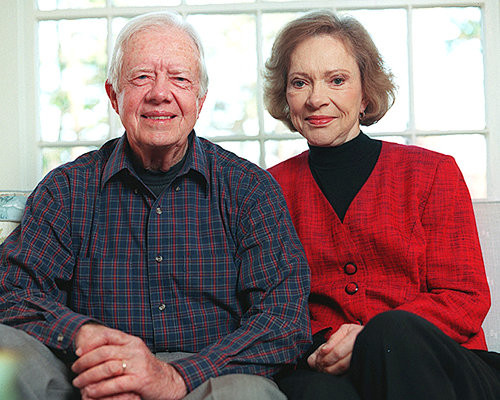 Carter criticized the administration of President Barack Obama for the use of drone strikes against suspected terrorists. Carter also said that he disagrees with President Obama's decision to keep the Guantánamo Bay detention camp open, saying that the U.S. government had no moral leadership, and was committing human rights violations.In July 2013, Carter critized current federal surveillance programs, as disclosed by Edward Snowden, stating "America has no functioning democracy at this moment."

On August 3rd, 2015, Carter had elective surgery to remove "a small mass" on his liver. His initial prognosis was for a full recovery, but on August 12, Carter announced he had been diagnosed with cancer that had spread elsewhere in his body, without specifying where the cancer had originated. On August 20, he disclosed that melanoma had been found in his brain and liver, and that he had begun treatment with the immunotherapy drug pembrolizumab and was about to start radiation therapy. His healthcare is being managed by Emory Healthcare of Atlanta. Carter's family has a history of cancer, including both of his parents and all three of his siblings. On December 6, 2015, Carter issued a statement that his medical scans no longer showed any cancer.

On May 13, 2019, Carter broke his hip at his home in Plains. He underwent surgery the same day at the Phoebe Sumter Medical Center in Americus, Georgia. Later that year on October 6, 2019, he took another fall and received bad cut on his forehead above his left eyebrow that required 14 stitches to close. He also had a black eye from the injury. On October 21, 2019, Carter was admitted to the Phoebe Sumter Medical Center after suffering a minor pelvic fracture he obtained after falling again at home for the third time in 2019. None of these injuries kept Carter down and he was able to resume teaching Sunday school at Maranatha Baptist Church on November 3, 2019. On November 11, 2019, Carter was hospitalized at the Emory University Hospital in Atlanta for a procedure to relieve pressure on his brain, caused by bleeding believed to be connected to his falls. The surgery was successful, and Carter was released from the hospital on November 27. On December 2, 2019, Carter was readmitted to the hospital for a urinary tract infection but was released on December 4

Like a Timex watch, he keeps on ticking, making him the earliest-serving living former president, the oldest president ever to attend a presidential inauguration in 2017, at the age of 92, and the first to live over 40 years past the end of his own presidency. He is the nation's longest-lived president, and is now the first U.S. president to live to the age of 97. Former President Jimmy Carter and former First Lady Rosalynn Carter recently celebrated their 75th wedding anniversary in Plains. They were married on July 7, 1946. They held a reception to celebrate their 75th anniversary Saturday, July 10, 2021, in Plains. Attendees included former President Bill Clinton and former Secretary of State Hillary Clinton, as well as singer Garth Brooks. 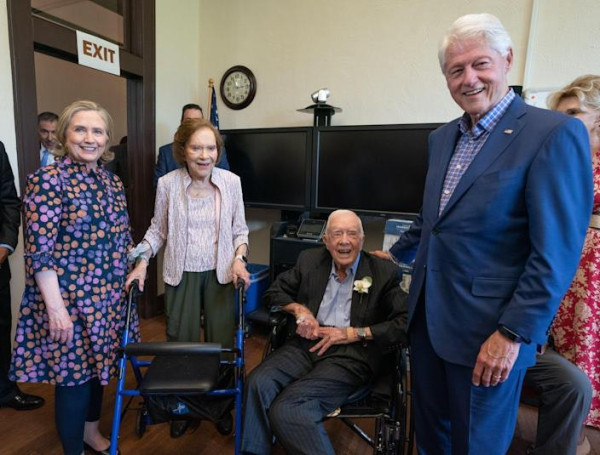 The Carter Center has set up a digital board for people to post birthday messages on its website that can be found here.
Collapse