Executive Order 13769 was officially entitled "Protecting the Nation from Foreign Terrorist Entry into the United States". It was signed by President Donald J. Trump on January 27, 2017, and it placed limits on travel to the United States by non-residents from certain countries, and by all refugees. The order limited the number of refugees that can be admitted into the United States in 2017 at 50,000 and it also suspended the U.S. Refugee Admissions Program (USRAP) for 120 days. The order provided that the USRAP program would be conditionally resumed for individual countries while prioritizing refugee claims from persecuted minority religions. The order also indefinitely suspended the entry of Syrian refugees. 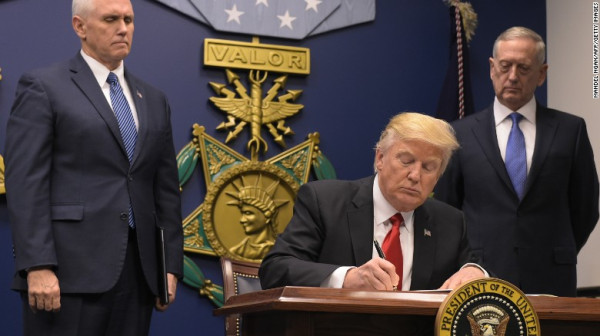 The order also allows for the suspension of entry of nationals from countries who do not meet adjudication standards under the Immigration and Nationality Act. The Homeland Security department lists these countries as Iran, Iraq, Libya, Somalia, Sudan, Syria, and Yemen. The order allows exceptions to the entry ban on a case-by-case basis.

The order is based, in part, on paragraph (f) of Title 8 of the United States Code § 1182 which discusses inadmissible aliens. Paragraph (f) reads:

This power comes from the McCarran-Walter Act of 1952, was amended by the Immigration and Nationality Act of 1965. That legislation provides that "no person shall receive any preference or priority or be discriminated against in the issuance of an immigrant visa because of the person's race, sex, nationality, place of birth, or place of residence". In 2015 and 2016 the seven countries listed in President Trump's executive order were placed on the list of "countries of concern" by the Obama administration.

President Donald Trump had expressed concern that terrorists are using the U.S. refugee resettlement program to enter the country. This was in part based on the experience of nations such as France, in which terrorist acts increased following an increase in the number of refugees and other immigrants from certain nations. As a candidate, Trump's "Contract with the American Voter" pledged to suspend immigration from "terror-prone regions". Trump-administration officials described the executive order as fulfilling this campaign promise.

On June 13, 2016 Trump proposed to suspend immigration from "areas of the world" with a history of terrorism. In an August 5 speech to a Maine audience Trump called for stopping the practice of admitting refugees from among the most dangerous places in the world. In a speech on August 31 Trump vowed to "suspend the issuance of visas" to "places like Syria and Libya."

According to White House spokespersons, the order was issued following consultation with Department of Homeland Security and State Department officials. On January 31 Homeland Security Secretary John Kelly told reporters that he "did know it was under development" and had seen at least two drafts of the order. Rex Tillerson, though not yet confirmed as Secretary of State, was involved in cabinet-level discussions about implementation of the order at least as early as 2:00 a.m. Sunday, January 29. White House cyber security adviser Rudy Giuliani said that President Trump came to him for guidance over the order.

Section 3 of the order blocks entry of aliens from Iran, Iraq, Libya, Somalia, Sudan, Syria, and Yemen, for at least 90 days, regardless of whether or not they hold valid non-diplomatic visas. This order affects about 218 million people who are citizens of these countries. After 90 days a list of additional countries must be prepared. On the authority of this section of the Executive Order, Deputy Assistant Secretary of State for Consular Affairs Edward J. Ramotowski issued a notice that "provisionally revokes all valid nonimmigrant and immigrant visas of nationals" of the designated countries.

Section 5 suspends the U. S. Refugee Admissions Program (USRAP) for at least 120 days but stipulates that the program can be resumed for citizens of the specified countries if the Secretary of State, Secretary of Homeland Security and the Director of National Intelligence agree to do so. The suspension for Syrian refugees is for an indefinite period. The number of new refugees allowed in 2017 was capped at 50,000 (reduced from 110,000). After the resumption of USRAP refugee applications were to be prioritized based on religion-based persecutions only in the case that the religion of the individual is a minority religion in that country.

The order provided that the Secretaries of State and Homeland Security may, on a case-by-case basis and when in the national interest, issue visas or other immigration benefits to nationals of countries for which visas and benefits are otherwise blocked.

Secretary of Homeland Security, John Kelly, stated to Congress that his department is considering a requirement that refugees and visa applicants reveal social media passwords as part of security screening. The idea was one of many to strengthen border security, as well as requesting financial records.

There was some early confusion about the status of green-card holders. According to White House Chief of Staff Reince Priebus, green-card holders would not be prevented from returning to the United States. According to the Associated Press no green-card holders were ultimately denied entry to the U.S. although several initially spent hours in detention. On January 29 Secretary Kelly deemed entry of lawful permanent residents into the U.S. to be "in the national interest" exempting them from the ban according to the provisions of the executive order. On February 1, White House Counsel Don McGahn issued a memorandum to the heads of the departments of State, Justice, and Homeland Security clarifying that the ban-provisions of the executive order do not apply to lawful permanent residents. The State Department said that the order did not affect U.S. citizens who also hold citizenship of one of the seven banned countries. On January 28 the State Department stated that other travelers with dual nationality of one of these countries—for example, an Iranian who also holds a Canadian passport—would not be permitted to enter.

Shortly after the enactment of the executive order, at 4:42 pm on January 27, border officials across the country began enforcing the new rules. The New York Times reported people with various backgrounds and statuses being denied entry or sent back. People from the countries mentioned in the order with valid visas were turned away from flights to the U.S. Several people already on planes flying to the U.S. at the time the order was signed were detained on arrival. On January 28 the American Civil Liberties Union (ACLU) estimated that there were 100 to 200 people being detained in U.S. airports, and hundreds were barred from boarding U.S.-bound flights.

In terms of barred visa-holders, the federal government reported that over 100,000 visas for foreigners inside and outside the United States have been revoked. The executive order also barred people from the seven countries from obtaining new immigrant visas.

The Executive Order met with near universal opposition from Democrats in Congress, as well as from Independent Senator Bernie Sanders, former Secretaries of State Madeleine Albright and Hillary Clinton, and former President Barack Obama. Praised the order came from Speaker of the House Paul Ryan, but some prominent Republicans expressed opposition to the order, including Senators John McCain, Lindsey Graham, and Susan Collins.

The order was condemned by Canadian Prime Minister Justin Trudeau, who said that Canada would continue to welcome refugees regardless of their faith. British Prime Minister Theresa May said that "the United States is responsible for the United States policy on refugees", adding that she "did not agree" with the approach. France and Germany condemned the order. Some European politicians, such as French presidential candidate Marine Le Pen, applauded the executive order.

From January 28 thousands of protesters gathered at airports and other locations throughout the United States to protest the signing of the order. The protestors were joined by several members of Congress, including Senator Elizabeth Warren, Representative John Lewis, as well as Virginia Governor Terry McAuliffe.

Legal challenges to the order were brought almost immediately after its issuance. From January 28 to January 31 almost 50 cases were filed in federal courts. Courts granted temporary relief, including a nationwide temporary restraining order that bars the enforcement of major parts of the executive order. The order also allowed "people from the seven countries who had been authorized to travel, along with vetted refugees from all nations, to enter the country." The Trump administration is appealing this order.

In response to the lawsuits the Department of Homeland Security issued a statement on January 29 that it would continue to enforce the executive order and that "prohibited travel will remain prohibited". On the same day a White House spokesperson said that the rulings did not undercut the executive order. On January 30 Acting Attorney General Sally Yates ordered the Justice Department from defending the executive order in court. In response, President Trump relieved her of her duties. He replaced her with Dana J. Boente the United States Attorney for the Eastern District of Virginia.

The state of Washington filed a legal challenge against the executive order, and Minnesota later joined the case. On February 3 District Judge James Robart of the United States District Court for the Western District of Washington presiding in Washington v. Trump issued a ruling temporarily blocking major portions of the executive order. He held that the plaintiffs had "demonstrated immediate and irreparable injury", and were likely to succeed in their challenge to the federal defendants. In response to Robart's ruling the Department of Homeland Security said on February 4 that it had stopped enforcing the executive order, while the State Department reinstated visas that had been previously suspended. 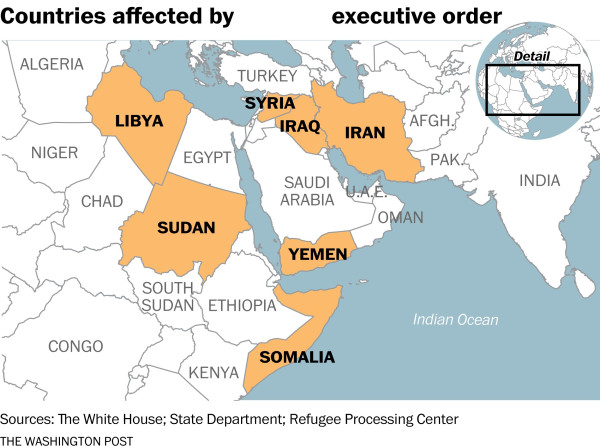 In February of 2017 President Trump said that the White House was "trying to redraft the order to strengthen it against legal challenges." The federal government also said in court filings that a new executive order is planned to be issued to addresses constitutional concerns about Executive Order 13769. According to an administration officials, a redraft version of the executive order will focus on the same seven countries, but exempt lawful permanent residents and those who already hold visas, whether or not they have entered the United States. The redrafted version is intended to address the problems identified to address to due process concerns raised by the U.S. Court of Appeals for the Ninth Circuit.
Collapse