President Barack Obama was a professed supporter of comprehensive immigration reform. One of the thing he pushed for was a pathway to citizenship for many immigrants illegally residing in the United States. In spite of these intentions on the part of the President however, Congress did not pass a comprehensive immigration bill during Obama's two terms in office. In order to achieve some of his goals for immigration reform, President Obama used executive orders and other action. 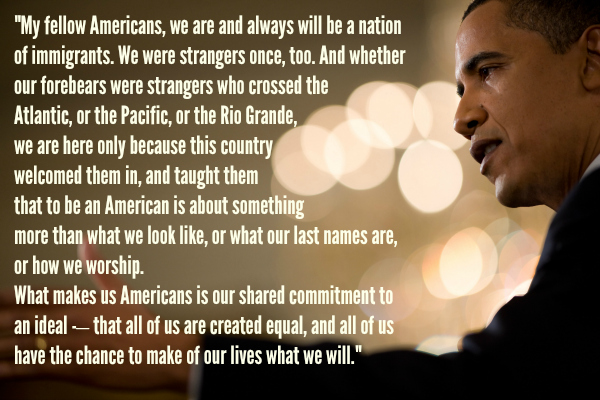 In the 2010 "lame-duck" session of Congress, Obama pushed for passage of the DREAM Act. The DREAM Act (acronym for Development, Relief, and Education for Alien Minors) was legislation proposing a process for undocumented immigrants in the United States that would first grant conditional residency and if these applicants met further qualifications, permanent residency. The bill was first introduced in the Senate on August 1, 2001, and was reintroduced several times, but has never passed. The 2010 version of the DREAM Act passed the House but failed to overcome a Senate filibuster in a 55-41 vote in favor of the bill. Later, in 2013, the Senate passed an immigration bill with a path to citizenship, but the House did not vote on the bill.

In 2012, President Obama implemented a policy known as DACA ("Deferred Action for Childhood Arrivals"). This policy protected roughly 700,000 illegal immigrants from deportation. It applies only to those who were brought to the United States before their 16th birthday. Two years later, in 2014, Obama announced a new executive order that would have protected another four million illegal immigrants from deportation. That order was blocked by the Supreme Court in a 4-4 tie vote that upheld a lower court's ruling.

Despite executive actions to protect some individuals, deportations of illegal immigrants continued under Obama. A record high of 400,000 deportations occurred in 2012. The number of deportations fell during Obama's second term. The percentage of foreign-born people living in the United States reached 13.7% in 2015, higher than at any point since the early 20th century. After having risen since 1990, the number of illegal immigrants living in the United States had stabilized at around 11.5 million individuals during Obama's presidency, down from a peak of 12.2 million in 2007.

In March 2014, halfway into his second term, Obama was attending a gala for immigration advocates at which Janet Murguía, president of the National Council on La Raza (NCLR), publicly criticized the President for not doing enough for immigration reform. Murguria acknowledged that congressional Republicans were responsible for blockading comprehensive immigration reform, but she told the President that she did not see him as entirely blameless for her community's disappointment on the issue. She said "For us, this president has been the deporter-in-chief." Her criticism came from one of the largest Latino advocacy groups in the country. Many NCLR leaders had become advisers in the Obama White House.

Murguía's address framed the dilemma that President Obama found himself in when it came to the issue of immigration. On the one hand he faced growing public outrage for not doing enough to combat illegal immigration. But on the other hand, he was also confronted by a growing Latino voting bloc with political clout, that was becoming disillusioned with Obama over the rising number of deportations.

At the end of this two terms in office, Obama was unable to pass comprehensive immigration, primarily due to opposition in Congress. He set a precedent in creating DACA, which resulted in more than 800,000 young undocumented immigrants known as DREAMers receiving temporary work permits and protection from deportation. However more immigrants were forcibly removed from the United States during the Obama administration than any other president (over 2.8 million undocumented immigrants were deported in that time).

As the nation transitioned from an Obama presidency to the administration of Donald Trump, immigration reform advocates have expressed concerns that Trump will use the most aggressive pieces of the current administration's enforcement apparatus to accelerate the number of deportations. Greisa Martinez, advocacy director for pro-immigrant group United We Dream, has said "There is a vast network of a deportation structure that will now facilitate Trump's move to deport millions of people more."

One of the other criticisms of the Obama administration is is reversing its position on the controversial practice of detaining immigrant women and children, even asylum seekers. At first, Obama abandoned the controversial policy in 2009. But the Obama administration later reversed their position on this issue after a surge in migrants, especially children, occurred.

On November 20, 2014, in a televised address from the White House, Barack Obama announced a program of "deferred action" which would allow roughly 45% of illegal immigrants to legally stay and work in the United States. The largest prior deferral action occurred in 1990, during the administration of President George H.W. Bush. Under Obama's proposal, up to 3.7 million undocumented parents of individuals who are U.S. citizens, or who have been legal permanent residents in the country for at least five years, became eligible for the new deferrals. Also eligible were about 300,000 immigrants who arrived in the US as children before January 2010. Members of this second group would be eligible by expansion of the existing Deferred Action for Childhood Arrivals (DACA) program, which previously covered 1.2 million people, the expansion bringing the new coverage total to 1.5 million. The new deferrals would be granted for three years at a time. Supplemental executive actions also announced include an end to the Secure Communities program, increased resources for border enforcement, and new procedures for "high-skilled immigrants". In his televised address, the President said:

"By acting where Congress has failed, I hope to work with both parties to pass a more permanent legislative solution. And the day I sign that bill into law, the actions I take will no longer be necessary."

The plan was stymied on December 16, 2014, when Arthur J. Schwab, a United States federal judge in the United States District Court for the Western District of Pennsylvania, ruled that President Obama's executive action on immigration was unconstitutional. That case involved a Honduran man facing criminal charges for returning to the United States after being deported. On December 4, 2014, a more direct challenge was filed in federal court by the attorney general of Texas, on behalf of 17 states. By January 26, 2015, the number of states participating in the lawsuit had grown to 26.

On February 12, in testimony before the House of Representatives, state officials from Ohio and Kansas alleged that, due to the actions of the Obama Administration, it was difficult to determine whether illegal immigrants had registered to vote. Voter fraud became a concern for some members of Congress, who argued that Obama's program had increased the potential for such fraud occurring.

On February 16, 2015, Judge Andrew S. Hanen, of Federal District Court in Brownsville, Texas, issued a temporary injunction against the Deferred Action for Parental Accountability (DAPA) program. The next day, February 17, 2015, just one day before undocumented immigrants were set to begin applying for work permits and legal protections, Homeland Security Secretary Jeh Johnson announced a delay in implementing the DAPA program. He also said that the government planned to appeal the district court ruling.

The appeal was heard on an expedited basis by three judges of the United States Court of Appeals for the Fifth Circuit on July 10, 2015. On November 9, the divided circuit court affirmed the preliminary injunction of February 2015, and ordered the case back to the district court in Texas for trial. Judge Jerry Edwin Smith, joined by Judge Jennifer Walker Elrod agreed with the district court that Texas has standing because of the cost of issuing drivers licenses to aliens, and that President Obama’s order violated the rulemaking requirement of the Administrative Procedure Act. The majority held that the Immigration and Nationality Act “flatly does not permit” deferred action. Judge Carolyn Dineen King dissented. 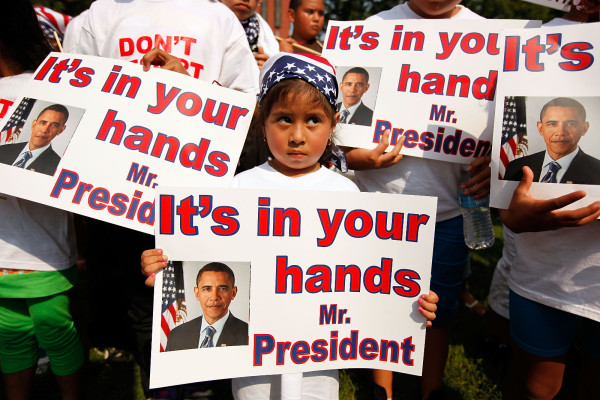