On November 4, 1979 a group of Iranian students, belonging to the Muslim Student Followers of the Imam's Line, took over the U.S. Embassy in Tehran. The group was made up of supporters of the Iranian Revolution. In taking control of the embassy, the group held Fifty-two American diplomats and citizens hostage for the next 444 days. This group remained in captivity until January 20, 1981. 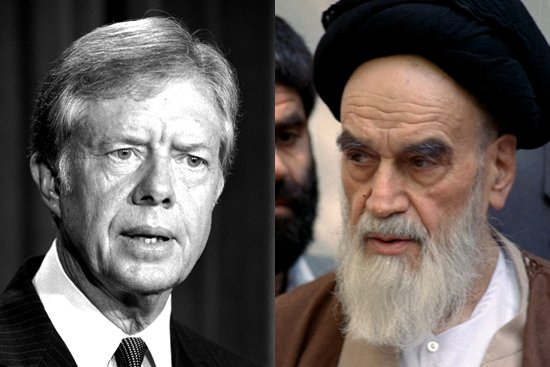 The plight of the hostages was first and foremost in the mind of President Jimmy Carter. He himself remained in isolation in the White House for more than 100 days, before leaving to participate in the lighting of the National Menorah on the Ellipse. On April 24, 1980, Carter ordered Operation Eagle Claw to try free the hostages. The mission failed. One of the helicopters intended for the mission encountered hydraulic problems, another got caught in a cloud of very fine sand, and another one showed signs of a cracked rotor blade. As the U.S. force prepared to leave, one of the helicopters crashed into a transport aircraft which contained both servicemen and jet fuel. The resulting fire destroyed both aircraft and killed eight servicemen.

Earlier that month, on April 7, 1980, Carter announced sanctions against Iran, which included a ban on immigration from that country. The militants controlling the Embassy had expressed a willingness to to turn the hostages over to the Government of Iran, but the Iranian Government has refused to take custody of the hostages. Carter considered this to place "full responsibility of the Ayatollah Khomeini and the Revolutionary Council for the continued illegal and outrageous holding of the innocent hostages." He said that "the Iranian Government can no longer escape full responsibility by hiding behind the militants at the Embassy."

As a consequence of this, Carter, by executive order, took four measures in response. First, the United States broke diplomatic relations with the Government of Iran. Iran's Embassy and consulates in the United States were closed and all Iranian diplomatic and consular officials were declared "persona non grata". Carter ordered that they "must leave this country by midnight tomorrow." His second measure was to order his Secretary of the Treasury to put into effect official sanctions prohibiting exports from the United States to Iran. In doing so, he relied on a sanctions resolution approved by 10 members of the United Nations Security Council on January 13, 1980. That resolution had been vetoed by the Soviet Union. Carter's ban included shipment of food and medicine, items which were not included in the U.N. Security Council motion. .

His third measure was to order the Secretary of Treasury to freeze all of the assets of the Iranian Government. These had already been frozen by a previous executive order. Carter directed that these assets were to be used to satisfy claims against the Iranian government by the hostages and their families and pledged to introduce legislation to "facilitate processing and paying of these claims."

It was his last move that directly effected immigration and visits to the United States by Carter. He ordered the Secretary of State and the Attorney General to invalidate all visas issued to Iranian citizens for future entry into the United States, effective as of the day of the statement (April 7th). Carter said "We will not reissue visas, nor will we issue new visas, except for compelling and proven humanitarian reasons or where the national interest of our own country requires. This directive will be interpreted very strictly."

Carter said that his government had "acted at all times with exceptional patience and restraint in this crisis". He pledged continuing support for UN Secretary-General Kurt Waldheim and promised to "continue to consult with our allies and other friendly governments on the steps we are now taking and on additional measures which may be required."

The hostages were released on January 20, 1981, at the moment President Reagan completed his 20‑minute inaugural address after being sworn in. They were flown from Iran to Algeria, then to Rhein-Main Air Base in West Germany and on to an Air Force hospital in Wiesbaden, where former President Carter received them. After medical check-ups and debriefings, the hostages took a second flight to Stewart Air National Guard Base in Newburgh, New York, with a refueling stop in Shannon, Ireland, where they were greeted by a large crowd. From Newburgh, they traveled by bus to the United States Military Academy at West Point and stayed at the Thayer Hotel for three days, receiving a heroes’ welcome all along the route. Ten days after their release, they were given a ticker tape parade through the Canyon of Heroes in New York City. 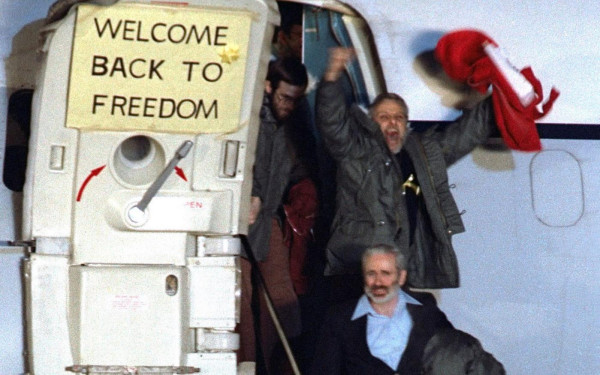 The dramatic change in American–Iranian relations, from allies to enemies, helped embolden the Iraqi leader, Saddam Hussein. The United States supplied Iraq with helicopters and satellite intelligence that was used in selecting bombing targets during the subsequent Iraq-Iran War.
Collapse