Alan Simpson (second from the right in the picture below) was a three-term Republican Senator from Wyoming with a reputation for bipartisanship. In 1986 he, along with a Democratic Congressman, Representative Romano Mazzoli from Kentucky, (shown shaking President Reagan's hand in the picture), co-sponsored legislation designed to address the ongoing problem of illegal immigration. Their legislation recognized that a huge part of the problem with illegal immigrants was with employers who saw an economic benefit in hiring cheaper immigrant labor without any accountability. The two men chaired their respective immigration subcommittees in each House of Congress. Thy collaborated along with the bipartisan Commission on Immigration Reform, chaired by Reverend Theodore Hesburgh, the President of the University of Notre Dame, to come up with a series of recommendations to address some of the problems that resulted from illegal immigration. The legislation they produced became known as the Simpson–Mazzoli Act, or the Immigration Reform and Control Act of 1986. The bill was signed into law by President Ronald Reagan on November 6, 1986. 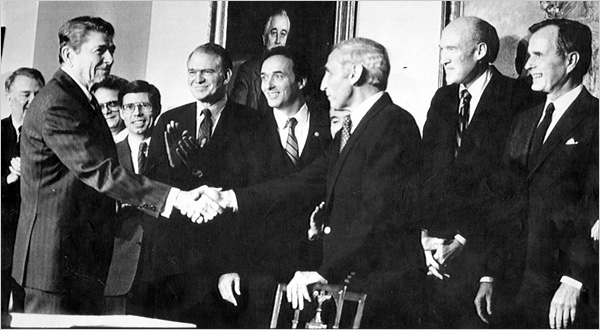 Key provisions in the bill included the following:

1. Employers were required to attest to their employees' immigration status.
2. It became illegal for employers to hire or recruit illegal immigrants knowingly.
3. The bill legalized certain seasonal agricultural illegal immigrants.
4. The bill also legalized illegal immigrants who entered the United States before January 1, 1982 and had resided there continuously. Those who qualified were required to admit their guilt, pay a fine as well as any back taxes due. They were also required to prove that they were not guilty of crimes, that they were in the country before January 1, 1982, and that they possessed the requisite level of knowledge about U.S. history, government, and the English language.

At the time, the Immigration and Naturalization Service (INS) estimated that about four million illegal immigrants would apply for legal status through the act and that roughly half of them would be eligible

The law made it a criminal offence for prospective employers of illegal immigrants to engage in a "pattern or practice" of knowingly hiring an "unauthorized alien". It also created financial and other penalties for those employing illegal immigrants. Regulations to the Act created the I-9 form to ensure that all employees presented documentary proof of their legal eligibility to accept employment in the United States. This applied to employers that had more than three employees.

The first version of the Simpson–Mazzoli Bill was reported out of the House and Senate Judiciary Committees, but it was not put to a vote in the House because civil rights advocates were concerned over the potential for abuse and discrimination against Hispanics. Agricultural employers asked for additional provisions for foreign labor, and the U.S. Chamber of Commerce was also opposed to the sanctions called for against employers.

A second version of the Simpson–Mazzoli Bill passed in both houses in 1985. Further delay occurred however over the issue of the cost of its implementation. The new bill had been watered down somewhat in that it contained an "affirmative defense" clause that explicitly released employers from any obligation to check the authenticity of workers' documents. The cost issue was ultimately resolved

Employers tried to avoid the law by using subcontracting agreements, in which a U.S. citizen or resident alien contractually agreed with the employer to provide a specific number of workers for a certain period of time to undertake a defined task at a fixed rate of pay per worker. By using a subcontractor, the employer was no longer liable under the Act because since the workers were not considered to be employees.

While well-intentioned, the bill did not have a significant impact on decreasing the illegal immigrant population. It is believed that 11 million undocumented immigrants began living in the United States since the passage of the Immigration Reform and Control Act of 1986, while amnesty was granted amnesty around 3 million illegal immigrants.

One study by economist Scott Baker published in American Economic Review in May of 2015, credits that the legalization of three million immigrants with a corresponding reduction in the crime rate by 3-5%, with the highest decrease in property crime. The author concludes that this is due to greater job market opportunities for the immigrants. The findings of this study are not universally accepted.

In his diaries, President Ronald Reagan said he was going to sign the bill because "we had to regain control of our borders". When he signed the bill, President Reagan issued a written statement detailing the intention of the law. He concluded:

"Distance has not discouraged illegal immigration to the United States from all around the globe. The problem of illegal immigration should not, therefore, be seen as a problem between the United States and its neighbors. Our objective is only to establish a reasonable, fair, orderly, and secure system of immigration into this country and not to discriminate in any way against particular nations or people. The act I am signing today is the product of one of the longest and most difficult legislative undertakings of recent memory. It has truly been a bipartisan effort, with this administration and the allies of immigration reform in the Congress, of both parties, working together to accomplish these critically important reforms. Future generations of Americans will be thankful for our efforts to humanely regain control of our borders and thereby preserve the value of one of the most sacred possessions of our people: American citizenship."
Collapse