Shortly after the Civil War, some states started to pass their own immigration laws. This especially became an issue in California, where the state was faced with an influx of immigrants from China. Immigration from China to the Western United States increased in the middle of the nineteenth century, starting with the California Gold Rush. This led to hostility towards the Chinese immigration on the part of many California natives, especially among labor unions. The government of California passed a number of laws unfriendly to Chinese immigration, including the offensively named "Anti-Coolie Act" of 1862. As the recession hit, the Californians who owned the rights to the land on which the gold was mined were looking for cheap labor to maximize profits. They found this in the Chinese immigrants who came to America. Many Chinese immigrants made the voyage on credit, and upon arrival in California had no choice but to accept lower wages to repay their creditors. Domestic miners responded formed these “anticoolie” clubs that sought to create clear divisions between white workers and Chinese workers. The clubs almost served like unions that represented the interests of the white miners in the west. Chinese workers were working for wages between one and two dollars less than their white counterparts.

The California legislature joined the native Californians, first by imposing a foreign miners’ tax that called for a three-dollar monthly tax on foreign miners in the state. This was passed in 1852. Then, inn 1855, the California legislature passed another act entitled Discourage the Immigration to this State of Persons who cannot Become Citizens thereof. The passage of the Anti-Coolie Act, was ratified by California’s state legislature on April 26, 1862. It was an attempt to increase the scope of their authority by levying a $2.50 tax on anyone of Chinese origin who applied for licenses “to work in the mines, or to prosecute some kind of business”. Chinese workers subsisted on wages of $3 to $4 a month, so the tax was a significant burden to shoulder. This was followed by other anti-Chinese discriminatory legislation.

This trend was contrary to what the United States federal government wanted to happen. It was pursuing a more friendly approach to the Chinese government. In 1868, the governments of the United States and China agreed on the Burlingame Treaty, whereby China was granted most favored nation status for trade, and both countries would freely permit immigration of the citizens of the other country, but with no promise of a path to citizenship. Abraham Lincoln had appointed Anson Burlingame as minister to the Qing Empire. Burlingame worked for a cooperative policy rather than the imperialistic policies of force which had been used during the First and Second Opium Wars and developed relations with the reform elements of the court. The United States wanted to gain access to profitable trading opportunities and foster the spread of Christianity in Asia. The treaty was ratified under the administration of Andrew Johnson.

In 1875, the State of California passed a statute authorizing the immigration commissioner to inspect passengers arriving in California at a cost of 75 cents per inspection (levied on the passenger) and giving him the authority to deny entry to passengers suspected of being lewd and debauched. Those suspected thus could be allowed entry if the captain of the ship paid a bond for them.

The legislation was challenged when 22 women from China, including a woman named Chy Lung, were among the passengers on a steamer that journeyed from China to San Francisco, arriving in 1875. The immigration commissioner examined the passengers and identified Chy Lung and the other women as "lewd and debauched women." The captain of the ship had the option of paying a $500 bond per woman to allow her to land, but the captain refused to pay the bond, and detained the women on board. They sued for a writ of habeas corpus, which led to them being moved into the custody of the Sheriff of the County and City of San Francisco, where they stayed, awaiting deportation. The women appealed the decision to deport them. The California High Court upheld the constitutionality of the statute used to deny them entry, and upheld their deportation. They appealed the decision in the United States Supreme Court.

Justice Stephen Johnson Field ordered the release of all the women from the Sheriff's custody. However, Chy Lung still pressed the case in the Supreme Court, seeking to test the constitutionality of the statute that had been used to imprison her. On October 1, 1875, the Supreme Court decided unanimously in favor of Chy Lung. Its primary argument was that the United States federal government, as opposed to state governments, were in charge of immigration policy and diplomatic relations with other nations, so it was unconstitutional for the state of California to impose restrictions on Chinese immigration. The Supreme Court said that this action by the government of California could jeopardize foreign relations for the United States government insofar as it ran afoul of treaty obligations. 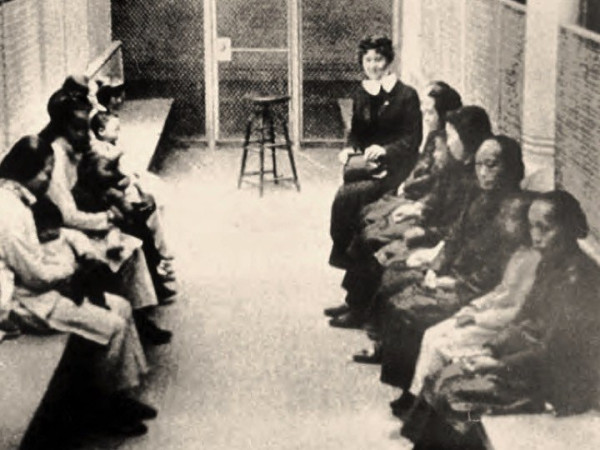 To address this issue, the government of President Ulysses Grant passed its first official policy significantly restricting immigration. This law, called the Page Act of 1875, prohibited the entry of immigrants considered "undesirable", a category intended to include forced laborers and female prostitutes, and applied to people of Chinese citizenship and descent. The bar on female prostitutes was the most heavily enforced aspect of the Act. The implementation involved pre-screening of Chinese women in Hong Kong to ascertain their good moral character and certify that they were not prostitutes. This was very different from the operation of the California statute, which involved inspection by the immigration commissioner after the ship had landed.

This would not be the last time that the issue of Chinese immigration would be a contentious issue. In the next decade, the administration of Chester Alan Arthur would address the issue as Congress sought to pass the Chinese Exclusion Act.
Collapse