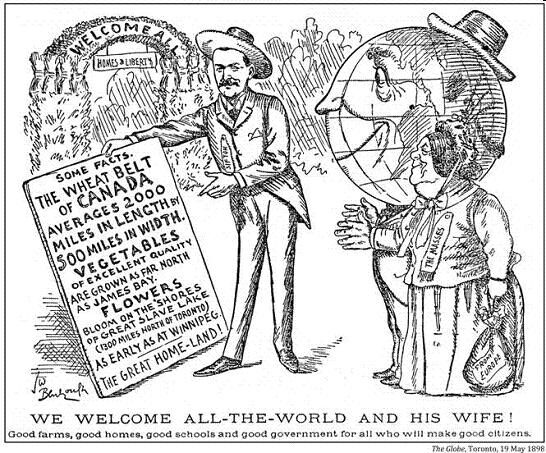 One of the first issues that this body had to deal with was immigrants who entered the country by crossing the Canadian border. During the 1880s and 1890s, the U.S. began tightening its immigration laws by barring certain ethnic groups from entering, for example the Chinese. Transportation companies that brought these barred individuals to the U.S. were responsible for the return of these people to their country of origin. To circumvent this, transportation companies landing barred people at Canadian ports. The immigrants would then come into the United States through what was then a porous Canada–United States border. During the last part of the nineteenth century, this was the preferred method of entry to the United States for Scandinavians, Russians, and other northern Europeans immigrating to Michigan, Wisconsin, Illinois, or other states on the Upper Great Plains. By 1892, Canadian carriers were advertising in Europe that entry at Canadian ports was a hassle-free way to enter the U.S.

To address this problem, the government of Grover Cleveland entered into an agreement with the Canadian government on September 7, 1893. Under this agreement U.S. immigration inspectors were allowed to monitor immigration at Canadian seaports and deny entry into Canada of any immigrant deemed excludable under U.S. immigration law. The U.S. placed inspectors at Quebec City, Halifax, Montreal, Vancouver, and Victoria. The system wasn't a perfect one, but it was the initial means of controlling the problem of those immigrants who would otherwise be denied entry into the United States from taking the Canadian route.

In 1907, Congress set up the Dillingham Commission to investigate the effects of immigration on the country. The Commission, chaired by Republican Senator William P. Dillingham of Vermont, produced a 's 40-volume report analyzing immigration to the United States during the previous three decades. It concluded that the major source of immigration had shifted from Central, Northern, and Western Europeans to Southern Europeans and Russians. The Commission proposed that there be a "reading and writing test as the most feasible single method of restricting undesirable immigration"

During the decade that followed, Italian immigration to the United States increased significantly. Over two million Italians immigrated to the US during the 1910s, with a total of 5.3 million between 1880 and 1920. About half of these people returned to Italy, after working an average of five years in the U.S. About 1.5 million Swedes and Norwegians also immigrated to the United States during this decade, due to poverty and religious oppression in united Sweden-Norway. They settled mainly in the Midwest, especially Minnesota and the Dakotas. Danes came in lesser numbers, due to a better economy, but many Danish immigrants were Mormon converts who moved to Utah. Over two million Central Europeans, mainly Catholics and Jews, immigrated between 1880 and 1924. People of Polish ancestry are the largest Central European ancestry group in the United States after Germans. Immigration of Eastern Orthodox ethnic groups was much lower.

To deal with this steady influx of immigrants who did not speak English, Congress passed the literacy requirement in 1917 that was recommended by the Dillingham Commission. The Immigration Act of 1917 (also known as the Literacy Act) was the most significant immigration act the United States had passed up to that time. It was the first bill aimed at restricting, and it reflected a return toward nativism. The law imposed literacy tests on immigrants, created new categories of inadmissible persons and barred immigration from the Asia-Pacific Zone. It governed immigration policy until amended by the Immigration and Nationality Act of 1952.

Various groups, including the Immigration Restriction League had supported literacy as a prerequisite for immigration from its formation in 1894. In 1895, Senator Henry Cabot Lodge had introduced a bill to the United States Senate to impose a mandate for literacy for immigrants, using a test requiring them to read five lines from the Constitution. The bill passed, but was vetoed by President Grover Cleveland in 1897. In 1901, President Theodore Roosevelt lent support for the idea in an address he gave on the subject. Once again this proposal was defeated in 1903. Yet another attempt to impose a literacy was passed again in 1912 and though it passed, it was vetoed by President William Howard Taft. By 1915, yet another bill with a literacy requirement was passed. Once again it was vetoed, this time by President Woodrow Wilson because he felt that literacy tests denied equal opportunity to those who had not been educated.

Up to this time, legislation had banned certain immigrants not based on their nation of origin or race, but because of the attributes of the immigrant. For example the Immigration Act of 1882 prohibited entry to the U.S. for convicts, indigent people who could not provide for their own care, prostitutes, and "lunatics or idiots". The Alien Contract Labor Law of 1885 prohibited employers from contracting with foreign laborers generally and bringing them into the U.S. (Despite this, many U.S. employers continued to recruit Mexican contract laborers assuming they would just return home). After the assassination of William McKinley, several immigration Acts were passed which broadened the defined categories of "undesireables". The Immigration Act of 1903 expanded barred categories to include anarchists, epileptics and those who had had episodes of insanity. Those who had infectious diseases and those who had physical or mental disabilities which would hamper their ability to work were added to the list of excluded immigrants in the Immigration Act of 1907.

This was the first time an immigration law impacted European immigration, because of the provision in the law which barred all immigrants over the age of sixteen who were illiterate. The Act continued the ban on contracted labor, but made a provision for temporary labor, which allowed laborers to obtain temporary permits, because they were inadmissible as immigrants. The waiver program, enabled continued recruitment of Mexican agricultural and railroad workers. The terms "mentally defective" and "persons with constitutional psychopathic inferiority" was interpreted to include a ban on homosexual immigrants who admitted their orientation. 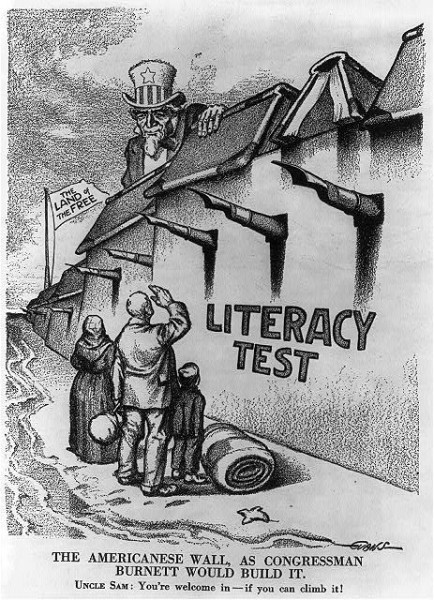 One section of the law designated an "Asiatic Barred Zone", from which people could not immigrate, and included much of Asia and the Pacific Islands. The zone was described on longitudinal and latitudinal lines, excluding immigrants from Afghanistan, the Arabian Peninsula, Asiatic Russia, India, Malaysia, Myanmar, and the Polynesian Islands. Neither Japan nor the Philippines were included in the banned zone. The law also increased the head tax to $8 per person and eliminated the exclusion of paying the head tax from Mexican workers.

The provisions of the new law were unsuccessfully challenged by Southwestern businesses. US entry into World War I, a few months after the law's passage, led to a waiver of the Act's provisions on Mexican agricultural workers, as well as Mexicans working in the mining and railroad industries and the exemptions continued through 1921.
Collapse