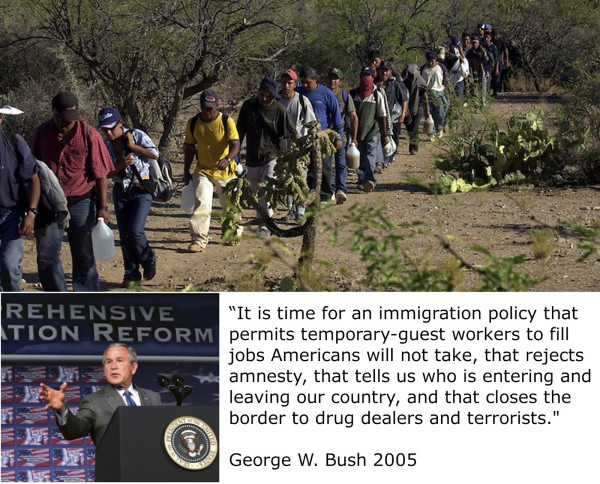 President George W. Bush was faced with this issue, which came to the forefront both because of national security concerns following the 2001 terrorist attacks by Al-Qaeda, but also because of ongoing concerns that these persons were robbing American citizens and legal immigrants of job opportunities. President Bush claimed that many of the jobs taken by illegal immigrants were those that most Americans were refusing to do, a position that was disputed by Mr. Camarota's report. In 2006, President Bush addressed Congress and urged them to allow more than 12 million illegal immigrants to work in the United States with the creation of a "temporary guest-worker program". Bush also urged Congress to provide additional funds for border security and committed to deploying 6,000 National Guard troops to the Mexico–United States border.

From May to June 2007, Bush strongly supported the Comprehensive Immigration Reform Act of 2007, which was written by a bipartisan group of Senators with the active participation of the Bush administration. The bill was a compromise based largely on provisions from three previous failed immigration reform bills:

a) The Secure America and Orderly Immigration Act, a bill proposed in May 2005 by Senators Ted Kennedy and John McCain, sometimes referred to as the "McCain-Kennedy Bill"
b) The Comprehensive Enforcement and Immigration Reform Act of 2005 , a bill proposed in July 2005 by Senators John Cornyn and Jon Kyl, sometimes referred to as the "Cornyn-Kyl Bill"
c) The Comprehensive Immigration Reform Act of 2006, sponsored by Senator Arlen Specter, which was passed in the Senate in May 2006 but never passed in the House.

The sole sponsor in the Senate for the Comprehensive Immigration Reform Act of 2007 was Majority Leader Harry Reid. It had support from Senators Kennedy, McCain and Kyl, along with Senator Lindsey Graham. President Bush also had input into the legislation and was a huge supporter of the proposal.

On June 7, 2007, three Senate votes on cloture (a move to end discussion) for the bill failed with the first losing 33-63, the second losing 34-61 and the third losing 45-50. This prompted Harry Reid to remark to reporters, "if another vote on cloture failed, the bill's over with. The bill's gone."

At the urging of President Bush, the bill was brought back for discussion in the Senate on June 25. On June 26, a motion to proceed passed the Senate, by a margin of 64-35. A number of amendments to the bill were considered and rejected. On June 28, the bill failed to get the 60 votes necessary to end debate. The final cloture vote lost 46-53. This effectively ended its chances. President Bush said he was disappointed at Congress's failure to act on the issue. 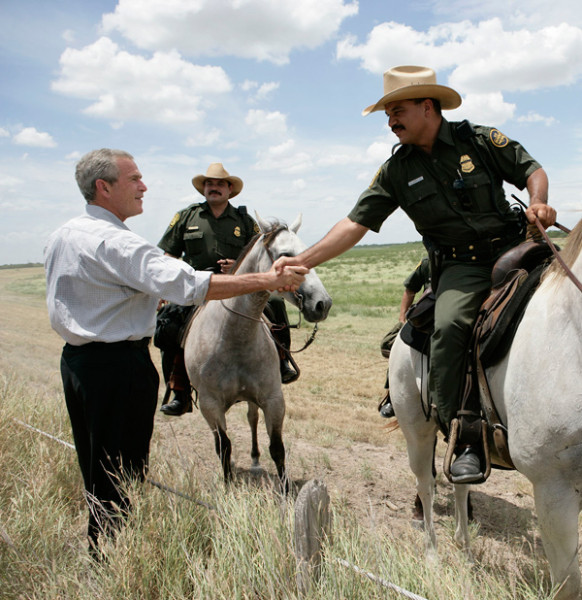 The bill had proposed a legalization program for illegal immigrants, with an eventual path to citizenship; establishing a guest worker program, a series of border and work site enforcement measures, a reform of the green card application process and the introduction of a point-based "merit" system for green cards, and other measures. Bush took the position that the lack of legal status denies the protections of U.S. laws to millions of people who faced poverty and exploitation, and penalized employers despite a demand for immigrant labor.

The debate over this issue caused a substantial rift within the Republican Party. Many conservatives opposed it because of its legalization or amnesty provisions.
Collapse