In the middle of the 19th century, pro-American, anti-immigrant sentiment became political with the formation of the Native American Party (renamed the American Party in 1855, but better known as the Know Nothing party). This party arose in response to an influx of immigration and the rising political influence of immigrants. The Know-Nothings promised to "purify" American politics by limiting or ending the political influence of Irish Catholics and other immigrants. They played off of the contemporary nativist and anti-Catholic sentiment that existed in many circles in America at the time. It was fed by popular fears that the country was being overwhelmed by German and Irish Catholic immigrants. 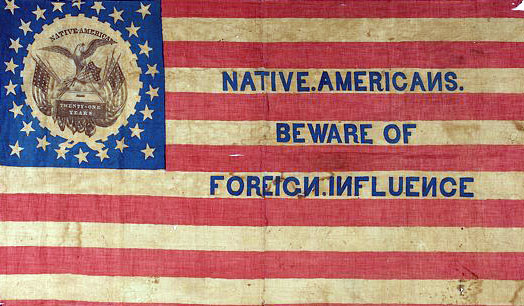 Anti-Catholicism was not really a factor in American politics until the arrival of large numbers of Irish and German Catholics in the 1840s. Many of these immigrants were Catholic and this elicited a prejudiced response from the Protestant majority. In New York, in 1843, the first navitist political party emerged, calling itself the American Republican Party. The nativist movement spread to nearby states, using that name or Native American Party or other similar names. These parties succeeded in a number of local and Congressional elections. For example, in 1844 in Philadelphia, following the Philadelphia riots, anti-Catholic orator Lewis Charles Levin was elected U.S. Representative from Pennsylvania's 1st District.

In the early 1850s, numerous secret nativist groups formed. The most prominent were the "Order of United Americans" and the Order of the Star Spangled Banner. These two groups merged in New York in the early 1850s as a secret order that quickly spread across the North, reaching non-Catholics, particularly those who were laborers or skilled workmen. They became known by the name "Know Nothings". The name originated from when a member was asked about its activities, he was supposed to reply, "I know nothing." In 1855, the Know Nothings first entered politics under the American Party label.

The immigration of large numbers of Irish and German Catholics to the United States in the period between 1830 and 1860 made religious differences between Catholics and Protestants a political issue. Violence sometimes erupted at the polls. Protestants accused Pope Pius IX of being an opponent of liberty. Catholicism was portrayed as tyrannical, opposed to material prosperity, the enemy of the railroad, as a group that wanted to take over schools with the intention of indoctrinating American children into Catholicism. Nativists spread conspiracy theories about the Pope wanting to subjugate the United States through a continuing influx of Catholics controlled by Irish bishops obedient to and personally selected by the Pope.

In 1849, one oath-bound secret society, the Order of the Star Spangled Banner, was created by Charles B. Allen in New York City. Fear of Catholic immigration led to a dissatisfaction with the Democratic Party, whose leadership in many cities included Irish-Catholics. They formed secret groups, throwing their support behind candidates sympathetic to their cause. When asked about these secret organizations, members were to reply "I know nothing", which led to their being called Know Nothings.

In spring 1854, the Know Nothing candidates swept the state of Massachusetts in the fall elections. The Whig candidate for mayor of Philadelphia, editor Robert T. Conrad, was a Know Nothing who promised to appoint only native-born Americans to office. He won the election by a landslide. In Washington, D.C., Know Nothing candidate John T. Towers defeated incumbent Mayor John Walker Maury. After the 1854 elections, they showed political strength in Maine, Indiana, Pennsylvania, and California. Stephen Palfrey Webb was elected as Mayor of San Francisco, and J. Neely Johnson as Governor of California. Nathaniel P. Banks, former Speaker of the Massachusetts House of Representatives, was elected to Congress as a Know Nothing candidate. (He later aligned with Republicans and was elected Speaker of the United States House of Representatives).

The results of the 1854 elections were so favorable to the Know Nothings that they formed officially as a political party called the American Party. They attracted many members of the nearly defunct Whig party as well as a significant number of Democrats. Membership in the American Party increased significantly, from 50,000 to an estimated one million plus during the course of the year. This was in part due to the collapse of the Whig Party, weakened by internal dissent and sectional factionalism.

In San Francisco, a Know Nothing chapter was founded in 1854 to oppose Chinese immigration. One judge of the state supreme court, who was also a member of the party, ruled that no Chinese person could testify as a witness against a white man in court.

In the spring of 1855, Levi Boone was elected mayor of Chicago for the Know Nothings. He barred all immigrants from city jobs. Abraham Lincoln was strongly opposed to the principles of the Know Nothing movement but also needed the votes of its membership to form a successful anti-slavery coalition in Illinois, so he did not protest this. In Ohio the party gained strength in 1855 with the support of German American Lutherans and Scots-Irish Presbyterians, both hostile to Roman Catholicism. Know Nothings scored victories in northern state elections in 1854, winning control of the legislature in Massachusetts and polling 40% of the vote in Pennsylvania. Although most of the new immigrants lived in the North, the American Party also polled well in the South.

The party even spread its brand to products as Nativism became a new American rage. These included Know-Nothing candy, Know-nothing tea, and Know-Nothing toothpicks. In Trescott, Maine, a shipowner dubbed his new 700-ton freighter, Know-Nothing.

The new party was well-received in rapidly growing industrial towns, where nativist workers competed with new Irish immigrants for jobs. It was strongest in poor districts. They tended not to attract the traditional wealthy political leadership class, especially lawyers and merchants. Their appeal was to working class men, farmers, and a large number of teachers and ministers. Their leadership showed incomes, occupation and social status that were about average. Few were wealthy. The party's voters were by not all native-born Americans. It received support from German and British Protestants as well as the Lutherans, Dutch Reformed, and Presbyterians.

The party also opposed slavery, called for an expansion of the rights of women, regulation of industry, and support of measures designed to improve the status of working people. It supported legislation to regulate railroads, insurance companies, and public utilities, free textbooks for public schools, and appropriations for local libraries.

The party attacked the civil rights of Irish Catholic immigrants. They called for public schools had to require compulsory daily reading of the Protestant Bible. In Massachusetts, the governor disbanded the Irish militias, and replaced Irish holding state jobs with Protestants. They tried and failed to reach the two-thirds vote needed to pass a state constitutional amendment to restrict voting and office holding to men who had resided in Massachusetts for at least 21 years. The legislature then called on Congress to raise the requirement for naturalization from five years to 21 years, but Congress never did so. The Know Nothing legislature appointed an investigating committee designed to prove widespread sexual immorality underway in Catholic convents, but the media mocked the move, especially after it was discovered that the key reformer was using committee funds to pay for a prostitute. The legislature shut down its committee and ejected the reformer.

Nativist sentiments sometimes became violent. On 6 August 1855, in Louisville, Kentucky, where a hotly contested race for the office of governor was underway, 22 were killed and many others injured in violent riots between Know Nothing activists and Catholics. In Baltimore the mayoral elections of 1856, 1857 and 1858 were all marred by violence and well-founded accusations of ballot-rigging. In Maine, Know Nothings were associated with the tarring and feathering of a Catholic priest, Father Johannes Bapst, in the coastal town of Ellsworth in 1851 and the burning of a Catholic church in Bath in 1854.

in Louisiana and Maryland, the Know Nothings tried to enlist native-born Catholics. In Maryland, the party's influence lasted through the Civil War. American Party Maryland Governor, and later Senator, Thomas Holliday Hicks and others all supported the United States in a State which bordered the Confederate States.

The party declined rapidly in the North after 1855. In the presidential election of 1856, it was bitterly divided over slavery. The main faction supported the ticket of presidential nominee Millard Fillmore and vice-presidential nominee Andrew Jackson Donelson. Fillmore, a former President, had been a Whig, and Donelson was the nephew of Democratic President Andrew Jackson, so the ticket was designed to appeal to both major parties. It won 23% of the popular vote and carrying one state, Maryland, with eight electoral votes. Many were surprised that Fillmore accepted the nomination of the party, since he had sent his daughter to a Catholic school to be educated. Nathaniel Banks left the Know Nothing Party for the more anti-slavery Republican Party. He took a large portion of its members with him.

Abraham Lincoln expressed his disgust with the Know-Nothings in a letter to Joshua Speed written in August 24, 1855. Lincoln never publicly attacked the Know Nothings because he relied of anti-slavery members of the party for political support. But he told Speed, "I am not a Know-Nothing – that is certain. How could I be? How can any one who abhors the oppression of negroes, be in favor of degrading classes of white people? Our progress in degeneracy appears to me to be pretty rapid. As a nation, we began by declaring that 'all men are created equal.' We now practically read it 'all men are created equal, except negroes.' When the Know-Nothings get control, it will read 'all men are created equals, except negroes and foreigners and Catholics.' When it comes to that I should prefer emigrating to some country where they make no pretense of loving liberty – to Russia, for instance, where despotism can be taken pure, and without the base alloy of hypocrisy."

After the Supreme Court's controversial Dred Scott v. Sandford ruling in 1857, most of the anti-slavery members of the American Party joined the Republican Party. By the 1860 election, they were no longer a serious national political movement. Most of their remaining members supported the Constitutional Union Party in 1860.

The Nativist movement was revived in later political movements, such as the American Protective Association of the 1890s and the Ku Klux Klan of the 1920s. George Wallace's 1968 presidential campaign was called the "neo-Know Nothing banner" by Time magazine. Recently Fareed Zakaria wrote that politicians who "encourage Americans to fear foreigners" were "modern incarnations of the Know-Nothings."
Collapse