In 2011 a sudden revolution in Tunisia was followed by protests in almost every Arab state. The wave of demonstrations became known as the Arab Spring. The event attracted significant attention from the administration of Barack Obama and was a significant event in Obama's foreign policy. After three weeks of unrest, Egyptian President Hosni Mubarak resigned in February of 2011 at the urging of President Obama. General Abdel Fattah el-Sisi eventually took power from Egyptian President Mohammed Morsi in a 2013 coup d'état, prompting the US to cut off arms shipments to long-time ally Egypt. Arms shipments were resumed by the Obama administration in 2015. Unrest also occurred in Yemen where a revolution and then a civil war took place, leading to a Saudi military campaign that received logistical and intelligence assistance from the United States. The Obama administration experienced some embarrassment after Saudi warplanes targeted a funeral in Yemen's capital Sanaa, killing more than 140 people. The UN accused the Saudi-led coalition of "complete disregard for human life" and President Obama promised a review of US aid to the Saudis. 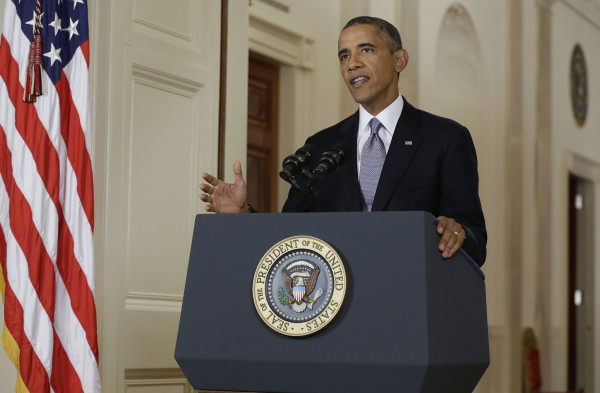 The Syrian civil war was fought in Syria between the Syrian Arab Republic led by Syrian president Bashar al-Assad and various domestic and foreign forces that opposed both the Syrian government and each other. Unrest in Syria began on 15 March 2011 as part of the wider 2011 Arab Spring protests. Discontent with the Syrian government led to an armed conflict after protests calling for Assad's removal were violently suppressed. This led to a war involving several factions, including the Syrian Armed Forces and its domestic and international allies, a loose alliance of mostly Sunni opposition rebel groups (such as the Free Syrian Army), Salafi jihadist groups (including al-Nusra Front and Tahrir al-Sham), the mixed Kurdish-Arab Syrian Democratic Forces (SDF), and the Islamic State of Iraq and the Levant (ISIL).

A number of countries including Iran, Russia, Turkey, and the United States involved themselves in the conflict by providing support to one or another faction. Iran, Russia, and Hezbollah supported the Syrian Arab Republic and the Syrian Armed Forces militarily. Russia conducted airstrikes and other military operations beginning in September 2015. The U.S.-led international coalition, established in 2014 with the declared purpose of countering ISIL, conducted airstrikes primarily against ISIL as well as some against government and pro-government targets. They also deployed special forces and artillery units to engage ISIL on the ground. The U.S. supported the Autonomous Administration of North and East Syria and its armed wing, the Syrian Democratic Forces (SDF). Support has been provided materially, financially, and logistically.

The Turkish state has fought the SDF, ISIL, and the Syrian government since 2016, but has also actively supported the Syrian opposition and occupied large portions of northwestern Syria while engaging in significant ground combat. Between 2011 and 2017, fighting from the Syrian civil war spilled over into Lebanon as opponents and supporters of the Syrian government traveled to Lebanon to fight and attack each other on Lebanese soil, with ISIL and Al-Nusra also engaging the Lebanese Army. While officially neutral, Israel has exchanged border fire and carried out repeated strikes against Hezbollah and Iranian forces.

International organizations have accused virtually all sides involved of severe human rights violations and massacres. The conflict led to a major refugee crisis. Over the course of the war, a number of peace initiatives have been launched, including the March 2017 Geneva peace talks on Syria led by the United Nations, but fighting has continued.

Syria has long been an adversary of the United States, but despite this, President Obama argued that unilateral military action to topple the Bashar al-Assad regime would be a mistake. As the protests continued and Syria fell into a protracted civil war, the United States supported the Syrian opposition against the Assad regime. US criticism of Assad intensified after the Ghouta chemical attack. Military intervention by the United States was averted by a Russian-backed deal that saw the Syrian government relinquish its chemical weapons.

The Syrian Civil War saw the rise of an Islamist group known as Islamic State of Iraq and the Levant (ISIL), which took control of large portions of Syria and Iraq. ISIL, which had originated as al-Qaeda in Iraq under the leadership of Abu Musab al-Zarqawi, and ISIL eventually challenged al-Qaeda as the most prominent global terrorist group. Beginning in 2014, the Obama administration launched air strikes against ISIL and it trained anti-ISIL soldiers, while continuing to oppose Assad's regime. The Obama administration also aided Syrian Kurds in their oppositiong to ISIL. This caused a strain in US relations with Turkey, which accused the Syrian Kurds of working with the Kurdish terrorist groups inside Turkey. Russia launched its own military intervention to aid Assad's regime, though the United States and Russia sometimes cooperated to fight ISIL.

In November 2015, Obama announced a plan to resettle at least 10,000 Syrian refugees in the United States. The Obama administration's handling of the Syrian conflict was criticized by many as the Syrian Civil War became a major humanitarian catastrophe. Obama's supporters credited him with keeping the United States out of another costly ground war in the Middle East.

The refugees of the Syrian Civil War were formerly citizens and permanent residents of Syria who fled the country during the course of the war. The pre-war population of the Syrian Arab Republic was estimated at 22 million (as of 2017), including permanent residents. Of that number, the United Nations (UN) identified 13.5 million people as displaced persons, requiring humanitarian assistance. Of these, since the start of the Syrian Civil War in 2011 more than six million were internally displaced, and around five million had crossed into other countries seeking asylum or were placed in Syrian refugee camps worldwide.

The Regional Refugee and Resilience Plan was established in 2015 and by 2016, various nations had made pledges to the United Nations High Commissioner for Refugees (UNHCR) to permanently resettle 170,000 registered refugees. Syrian refugees have contributed to the European migrant crisis, with the UNHCR receiving almost one million asylum applicants in Europe by August 2017. Turkey is the largest host country of registered refugees, with over 3.6 million Syrian refugees. 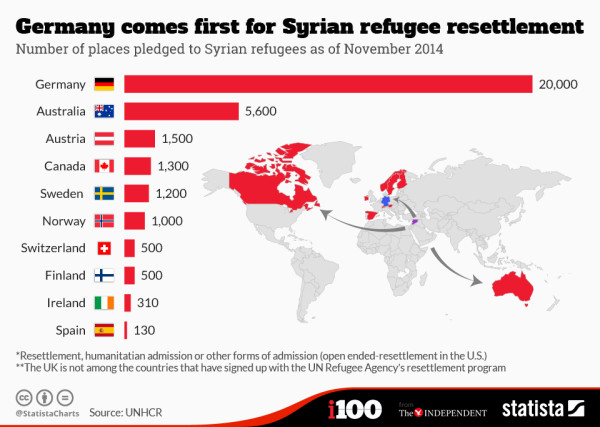 In late September 2016, the U.S had resettled over 12,500 Syrian refugees throughout the U.S. Most of this initial grouping were admitted to the U.S in the previous four months of 2016. The Obama Administration said that it anticipated the resettling of an additional 110,000 refugees. According to the United States Department of State Refugee Admissions Report dated December 2016, the US admitted 1,682 Syrian refugees in Fiscal Year 2015 (year ending Sept 2015), 12,587 in FY 2016 (15% of total worldwide refugee admissions into the US in FY 2016) and 3,566 Syrian refugees for the period October through December 2016.

President Obama made a statement on 20 September 2016, asking countries at a United Nations Leader's Summit on Refugees to "fulfill a moral obligation" to help with the Syrian refugee crisis. In his speech he mentioned that 4.8 million refugees from Syria was "particularly unacceptable", adding that the refugee crisis was so bad that most refugees left with hardly more than the clothes on their backs. He called Syria one of the top 3 most fled states during this crisis due to war with more than 4.8 million people fleeing a war-torn Syria.

The November 2015 Paris terrorist attacks resulted in thirty-one state governments (all but one led by a Republican governor) protesting the admission of Syrian refugees to their states. Many sought to block their admission. The effort of these governors to block Syrian refugees was unsuccessful as the result of court challenges. Under the Obama administration, the U.S. government has provided $5.9 billion to aid Syrian refugees, making the United States as the second-largest donor of Syrian refugees after Turkey.

On January 27, 2017, President Donald Trump announced that he had signed an executive order suspending any further resettlement of Syrian refugees to the United States indefinitely until further notice, He said that he was doing so due to security concerns, but that the suspension did not include refugee claims made by individuals on the basis of religious-based persecution, provided that the religion of the individual was a minority religion in the individual's country of nationality. This could include Christians, Shia Muslims and Yazidis in Syria. The suspension was to be lifted once an enhanced security screening procedure is implemented. Two days before signing the executive order, President Trump said that he was interested in establishing safe zones in Syrian territory, allowing refugees to live there while fleeing violence. He added that the European countries have "made a tremendous mistake by admitting millions of refugees from Syria and other Middle Eastern trouble spots" during the 2015 European migrant crisis.

In July 2017, President Trump along with Lebanese Prime Minister Saad Hariri agreed on US support for Lebanon to "supporting the humanitarian needs of displaced Syrian citizens as close to their home country as possible." It was also announced in April of that same year that the US would send $167 million for Lebanese support.

Supporters of President Trump's suspension of resettlement argued that this was done to help protect the safety of the United States. Opponents of the plan claimed that the suspension was "ill-conceived, poorly implemented and ill-explained." Critics even includes Michael Hayden and John McLaughlin, two former Republican CIA Directors.Critics argued that, since September 11, 2001, there have been no terrorist attacks in the U.S. that have been caused by any of the people banned by the order, and they argued that the suspension could compromise U.S. troops fighting overseas and that it provides propaganda for terrorist organizations like ISIS, as it allows them to claim that the U.S. has anti-Islam tendencies.

The U.S. 9th Circuit Court of Appeals, in a case known as Washington v. Trump, held that that the travel ban was not constitutional, but on December 4, 2017, the United States Supreme Court ruled in favor of supporting the Trump Administrations third installment of the travel ban.

In the 2016 Fiscal Year, the US dramatically increased the number of refugees admitted from Syria, totaling 12,587 refugees from the war-torn country. Ninety-nine percent of these refugees were Muslims (with few Shia Muslims admitted) and roughly 1% were Christian according to the Pew Research Center analysis of State Department Refugee Processing Center data. The religious breakdown of Syria's 17.2 million people is approximately 74% Sunni Islam, 13% Alawi, Ismaili and Shia Islam, 10% Christian and 3% Druze. 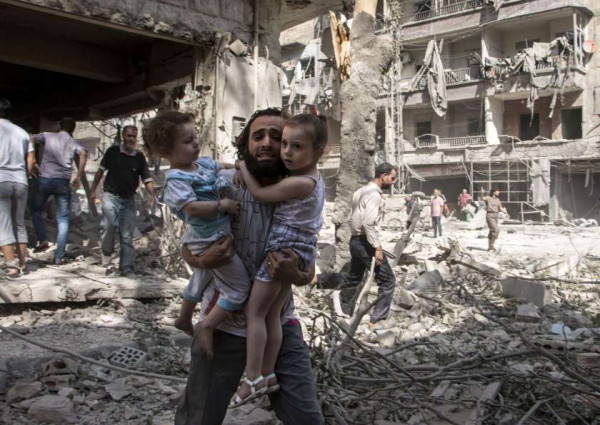 The state of religious persecution in Syria is described by the State Department as follows: "In Syria, the Assad regime increased its targeting and surveillance of members of a variety of faith groups it deemed a "threat," especially members of the country's Sunni majority. This occurred concurrently with the escalation of violent extremist activity targeted against religious minorities, including Christians, Druze, Alawites, and others as the current civil war continues. Large scale internal and external displacement of all sectors of the population is ongoing".