On July 23, 1885 (136 years ago today) Ulysses Grant, the 18th President of the United States, died at Mount McGregor, New York, at the age of 63. His love of cigars had caught up with him and throat cancer had claimed another victim.

He was born with the name Hiram Ulysses Grant on April 27, 1822 at Point Pleasant, Ohio. When he was 17, Grant was nominated by Congressman Thomas L. Hamer for a position at the United States Military Academy at West Point, New York. Hamer mistakenly nominated him as "Ulysses S. Grant of Ohio." At West Point, he adopted this name with a middle initial only. His nickname became "Sam" among army colleagues at the academy, since the initials "U.S." stood for "Uncle Sam". The "S", according to Grant, did not "stand for anything", though Hamer had used it to abbreviate Grant's mother's maiden name. 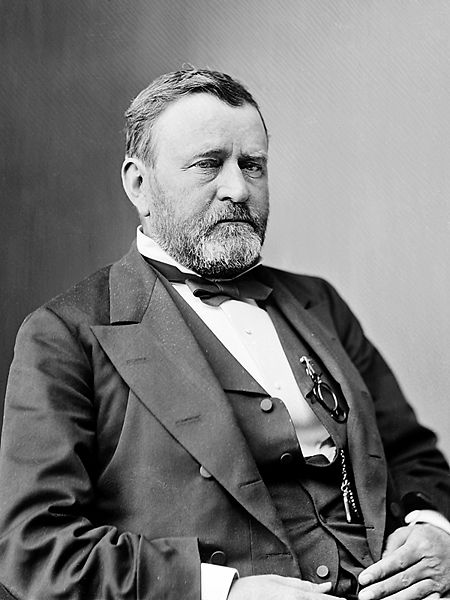 Grant fought in the Mexican War as a Lieutenant, but left the army in 1854 with the rank of Captain after given an ultimatum concerning his drinking. He experienced a series of business failures and reluctantly went to work for his father. When the Civil War began, he accepted a position offered by Illinois Governor Richard Yates to recruit and train volunteer units, but what Grant really wanted was a field command in the regular Army. He made multiple efforts to acquire such a position including seeking a meeting with his Mexican War Colleague George McClellan (now commander of the Union Army - McClellan refused to meet with Grant). He had no success.

Grant was promoted to Colonel by Governor Yates on June 14, 1861, and put in charge of the unruly Twenty-first Illinois Volunteer Regiment. A victory at the capture of Fort Donelson enhanced Grant's military reputation and he was ultimately put in command of the Union Army by President Abraham Lincoln, who said of Grant "I like this man, he fights." Under Grant, the Union Army defeated the Confederate army and effectively ended the war with the surrender of Robert E. Lee's army at Appomattox. Grant became a close friend of President Lincoln and was also admired by his fellow northerners. He likely literally "dodged a bullet" when he declined an invitation to join the Lincolns at Ford's Theater on the night of Lincoln's assassination because his wife did not like Mrs. Lincoln. During the term of Lincoln's successor, Andrew Johnson, Grant briefly and reluctantly served as Acting Secretary of War.

It was widely expected that the popular Grant would be elected president, and this occurred in 1868. Grant supported the Radical Republicans in their effort to eliminate all vestiges of slavery. He waged a successful suppression of the Ku Klux Klan in 1871. As president, he supported Reconstruction by enforcing civil rights laws and fighting Klan violence. Grant was President as the passage of the Fifteenth Amendment occurred. It gave constitutional protection for African American voting rights. He used the army to build the Republican Party in the South by protecting the rights of freedmen. As a result, African Americans were represented in the U.S. Congress for the first time in American history in 1870.

Grant's reputation as president by 1873 was at an all time high. But his reputation was marred by his repeated defense of corrupt appointees, and by the deep economic depression (called the "Panic of 1873") that dominated his second term. Although his Republican Party split in 1872 with reformers denouncing him, Grant was easily reelected. By 1874 the opposition was gaining strength and when he left the White House in March 1877, his successor Rutherford Hayes ordered federal troops to be withdrawn from the south, as white southerners regained control of every state in the south and reconstruction ended on a note of failure with the civil rights of African-Americans left unprotected.

After leaving office, Grant embarked on a two-year world tour that included many enthusiastic royal receptions. In 1880, he made an unsuccessful bid for a third presidential term. The trip around the world, although successful, was costly. When Grant returned to America, he had depleted most of his savings from the long trip and needed to earn money. He became a principal in the establishment of the new Mexican Southern Railroad Co., which failed. In 1881, Grant purchased a house in New York City and at the suggestion of his son Buck, and he placed almost all of his financial assets into Grant & Ward, the investment banking partnership which his son had established with Ferdinand Ward. In 1884, Ward swindled Grant and other investors who had been encouraged by Grant, bankrupted the company, and fled. Although he was short on funds himself, Grant was compelled by a sense of personal honor and with a personal loan of $150,000 from William H. Vanderbilt, he repaid those swindled by Ward, and repaid the loan by selling his Civil War mementos. Although the market value did not completely cover the loan, Vanderbilt insisted the loan was paid in full. The matter left Grant financially destitute.

Grant learned in 1884 that he was suffering from throat cancer. He had forfeited his military pension when he assumed the Presidency, but Congress subsequently restored Grant to the rank of General of the Army with full retirement pay. At the suggestion of Robert Johnson, Grant wrote several articles on his Civil War campaigns for The Century Magazine at $500 each. The articles were well received by critics, and Johnson suggested Grant write a book of memoirs, as Sherman and others had successfully done. Grant took up the project. Century offered Grant a book contract, including a 10% royalty. When Grant shared this information with his friend Mark Twain, Twain suggested that Grant counter with a request for double the royalty; at the same time, he made his own offer to Grant for his memoirs, talking of a 75% royalty. Grant ultimately decided on Twain's company, Charles L. Webster and Co., as his publisher. His son Fred assisted primarily with references and proofing. Grant finished his memoir just a few days before his death. They sold 350,000 two-volume sets at prices from $3.50 to $12 (depending on the binding). Each copy contained what looked like a handwritten note from Grant himself. In the end, Grant's widow Julia received about $450,000. 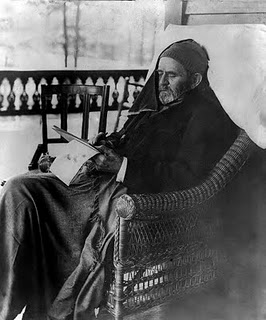 Grant died of throat cancer at the age of 63 in Mount McGregor. His last words were, "I hope that nobody will be distressed on my account." After lying in state, Grant's body was placed on a funeral train and traveled via West Point to New York City. His body lies in New York City's Riverside Park, beside that of his wife, in Grant's Tomb, the largest mausoleum in North America. Grant is also honored by the Ulysses S. Grant Memorial at the base of Capitol Hill in Washington.
Collapse