On July 21, 1861 (160 years ago today) the Battle of First Bull Run, also known as First Manassas (the name used by Confederate forces), was fought in Prince William County, Virginia, near the city of Manassas. It was the first major land battle of the Civil War. 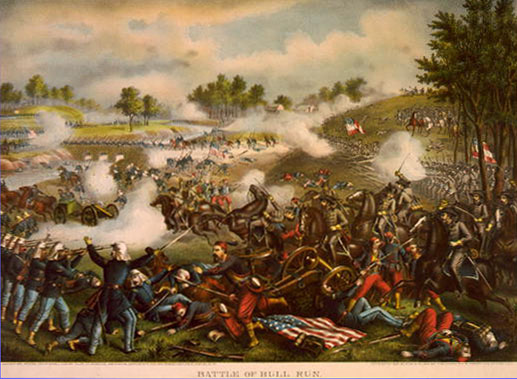 Just months after the start of the war at Fort Sumter, the Northern public was itching for action and the press was calling for a march against the Confederate capital of Richmond, Virginia. Many northerners believed that this would bring an early end to the rebellion. Yielding to public and political pressure, Brigadier General Irvin McDowell led his unseasoned Union Army across Bull Run against the equally inexperienced Confederate Army of Brigadier General Pierre Gustave Toutant Beauregard which was camped near Manassas Junction. McDowell was concerned about the untried nature of his army, but President Abraham Lincoln told him, "You are green, it is true, but they are green also; you are all green alike."McDowell's plan for a surprise flank attack on the Confederate left was poorly executed.

Confederate reinforcements under Brig. Gen. Joseph E. Johnston arrived from the Shenandoah Valley by railroad and the course of the battle quickly changed. A brigade of Virginians under a relatively unknown colonel from the Virginia Military Institute, Thomas J. Jackson, stood their ground, giving Jackson his famous nickname "Stonewall Jackson". The Confederates then launched a strong counterattack, and as the Union troops began withdrawing under fire, many panicked. McDowell's men frantically ran without order in the direction of Washington, D.C. The fierce fighting and numerous casualties made both sides realize that the war was going to be much longer and bloodier than either had anticipated. 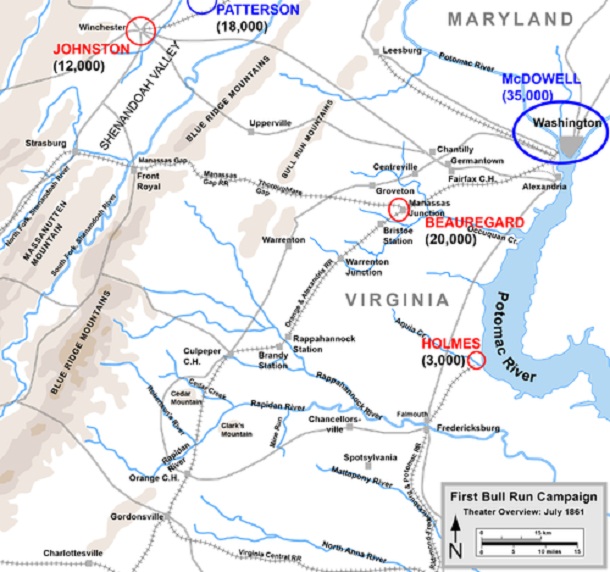 Bull Run was the largest and bloodiest battle in American history up to that point. That would soon change. But at the Battle of Firsr Bull Run, Union casualties were 460 killed, 1,124 wounded, and 1,312 missing or captured. Confederate casualties were 387 killed, 1,582 wounded, and 13 missing. The Northern public was shocked at the unexpected defeat of their army when an easy victory had been widely anticipated. Both sides quickly came to realize the war would be longer and more brutal than they had imagined. On July 22 President Lincoln signed a bill that provided for the enlistment of another 500,000 men for up to three years of service.

The battle was a clash between two large, poorly-trained bodies of recruits, led by inexperienced officers. Nearly 60,000 men were present at the battle, but only 18,000 had actually been engaged on each side. McDowell was later criticized for spending most of his energy maneuvering regiments and brigades, instead of controlling and coordinating the movements of his army as a whole. Johnston's decision to transport his infantry to the battlefield by rail played a major role in the Confederate victory. Jackson's brigade had fought almost alone for four hours and sustained over 50% casualties.

The First Battle of Bull Run made the combatants realize that the war would not be won by one large battle. Both sides began preparing for a long and bloody conflict. The battle demonstrated the need for adequately trained and experienced officers and men. One year later, many of the same soldiers who had fought at First Bull Run, now combat veterans, would have an opportunity to test their skills on the same battlefield at the Second Battle of Bull Run.

The embedded video below, produced by American Battlefield Trust, provides a five-minute explanation of the battle.