On July 20, 1969 (52 years ago today) Apollo 11 became the first spaceflight that landed humans on the Moon. Commander Neil Armstrong and lunar module pilot Buzz Aldrin formed the American crew that landed the Apollo Lunar Module Eagle on July 20, 1969, at 20:17 UTC. Armstrong became the first person to step onto the lunar surface six hours and 39 minutes later on July 21 at 02:56 UTC; Aldrin joined him 19 minutes later. They spent about two and a quarter hours together outside the spacecraft, and collected 47.5 pounds (21.5 kg) of lunar material to bring back to Earth. Command module pilot Michael Collins flew the Command Module Columbia alone in lunar orbit while his teammates were on the Moon's surface. Armstrong and Aldrin spent 21 hours, 36 minutes on the lunar surface, at a site they had named Tranquility Base upon landing, before lifting off to rejoin Columbia in lunar orbit. 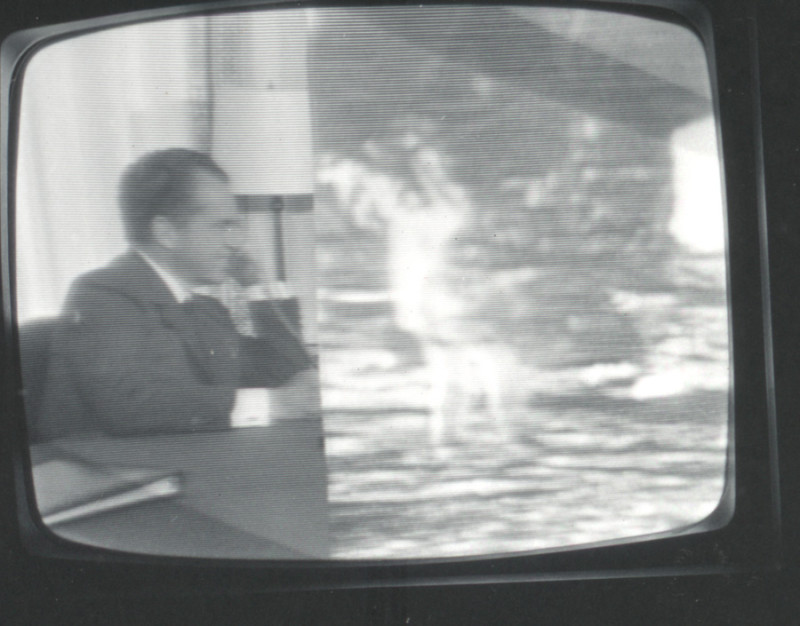 The Apollo program, also known as Project Apollo, was the third human spaceflight program carried out by the National Aeronautics and Space Administration (NASA). The program successfully landing the first humans on the Moon from 1968 to 1972. It was first conceived during Dwight D. Eisenhower's administration as a three-person spacecraft to follow the one-person Project Mercury, the prgram which put the first Americans in space. Apollo was later dedicated in honor of President John F. Kennedy's national goal for the 1960s of "landing a man on the Moon and returning him safely to the Earth," a pledge that Kennedy had made in an address to Congress on May 25, 1961. It was the third US human spaceflight program to fly, preceded by the two-person Project Gemini conceived in 1961 to extend spaceflight capability in support of Apollo.

After Apollo 11, five subsequent Apollo missions also landed astronauts on the Moon, the last, Apollo 17, in December 1972. In these six spaceflights, twelve people walked on the Moon. Apollo ran from 1961 to 1972, with the first crewed flight in 1968. It encountered a major setback in 1967 when an Apollo 1 cabin fire killed the entire crew during a prelaunch test. After the first successful landing, sufficient flight hardware remained for nine follow-on landings with a plan for extended lunar geological and astrophysical exploration, but three of these were cancelled due to budget cuts.

The Apollo 13 landing was prevented by an oxygen tank explosion in transit to the Moon, which destroyed the service module's capability to provide electrical power. The crew returned to Earth safely by using the lunar module as a "lifeboat" for these functions.

The Apollo program returned 842 pounds of lunar rocks and soil to Earth, providing a better understanding of the Moon's composition and geology.

Apollo 11 was launched by a Saturn V rocket from Kennedy Space Center on Merritt Island, Florida, on July 16 at 13:32 UTC, and it was the fifth crewed mission of NASA's Apollo program. The Apollo spacecraft had three parts: a command module (CM) with a cabin for the three astronauts, the only part that returned to Earth; a service module (SM), which supported the command module with propulsion, electrical power, oxygen, and water; and a lunar module (LM) that had two stages—a descent stage for landing on the Moon and an ascent stage to place the astronauts back into lunar orbit. After being sent to the Moon by the Saturn V's third stage, the astronauts separated the spacecraft from it and traveled for three days until they entered lunar orbit. Armstrong and Aldrin then moved into Eagle and landed in the Sea of Tranquility on July 20. The astronauts used Eagle's ascent stage to lift off from the lunar surface and rejoin Collins in the command module. They jettisoned Eagle and then propelled Columbia out of the last of its 30 lunar orbits onto a trajectory back to Earth. They returned to Earth and splashed down in the Pacific Ocean on July 24 after more than eight days in space.

Armstrong's first step onto the lunar surface was broadcast on live TV to a worldwide audience. He described the event in his first words spoken on the moon's surface: "one small step for man, one giant leap for mankind."

In the late 1950s and early 1960s, the Soviet launch of Sputnik 1, the first artificial Earth satellite, and the first manned space flight by Soviet Cosmonaut Yuri Gagarin had motivated NASA to proposed a manned lunar landing by the early 1970s. President Dwight Eisenhower held an ambivalent attitude on manned spaceflight, and early in his presidency, President Kennedy was ready to dismantle the manned space program. His Vice-President, Lyndon Johnson, was a strong supporter of the space program in the Senate. Johnson was given a major role in overseeing the administration's space policy, and at Johnson's recommendation Kennedy appointed James E. Webb to head NASA. In April 1961, after Gagarin became the first person to fly in space, American fears about being left behind in a technological competition with the Soviet Union grew. Less than a month later, Alan Shepard became the first American to travel into space, strengthening Kennedy's confidence in NASA. 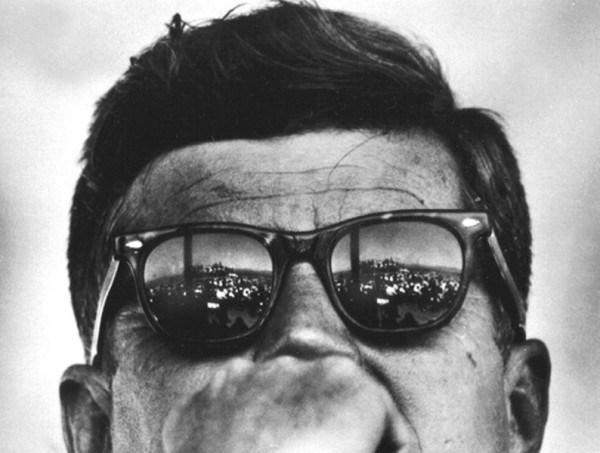 After the failed Bay of Pigs invasion, Kennedy felt pressured to respond to the erosion of American prestige. He asked Johnson to explore the feasibility of beating the Soviets to the Moon. Kennedy reluctantly agreed to Johnson's recommendation that the U.S. commit to a manned lunar landing as the major objective of the U.S. space program. In a May 25, 1961 speech, Kennedy famously declared:

"I believe that this nation should commit itself to achieving the goal, before this decade is out, of landing a man on the Moon and returning him safely to the Earth. No single space project in this period will be more impressive to mankind, or more important for the long-range exploration of space; and none will be so difficult or expensive to accomplish."

Gallup polling showed that many in the public were skeptical of the necessity of the Apollo Program, members of Congress were strongly supportive in 1961, and they approved a major increase in NASA's funding. In 1962, John Glenn became the first American to orbit the Earth, and the following year Mariner program sent an unmanned flight past Venus. Though some members of Congress came to favor shifting NASA's budget to other programs, Kennedy and Johnson remained committed to the lunar landing. 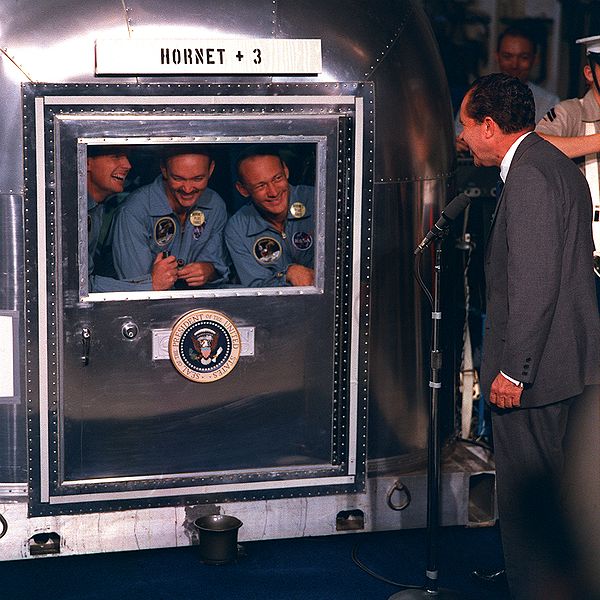 After a nearly decade-long effort, the United States won the race to land astronauts on the moon on July 20, 1969. President Richard Nixon spoke with Neil Armstrong and Buzz Aldrin during their moonwalk, calling the conversation "the most historic phone call ever made from the White House". He met with the astronauts on their return to earth. But Nixon was unwilling to keep funding for the National Aeronautics and Space Administration (NASA) at the high level seen through the 1960s, and rejected NASA Administrator Thomas O. Paine's ambitious plans for the establishment of a permanent base on the moon by the end of the 1970s and the launch of a manned expedition to Mars in the 1980s. On May 24, 1972, Nixon approved a five-year cooperative program between NASA and the Soviet space program, culminating in the Apollo–Soyuz Test Project, a joint mission of an American Apollo and a Soviet Soyuz spacecraft in 1975.
Collapse