On July 18, 1940 (81 years ago today), Franklin Delano Roosevelt broke precedent by being nominated by his party to run for a third term as President. No one else has ever done this before or since. Others have been nominated for president by a major party three times but none after holding the office twice. Ulysses Grant sought a third term after serving two and being out of office for four years, but his party chose another candidate instead (James Garfield). What Roosevelt did was quite phenomenal, especially considering his physical limitations and how these were perceived at the time, as well as the strength of the precedent up to that time. 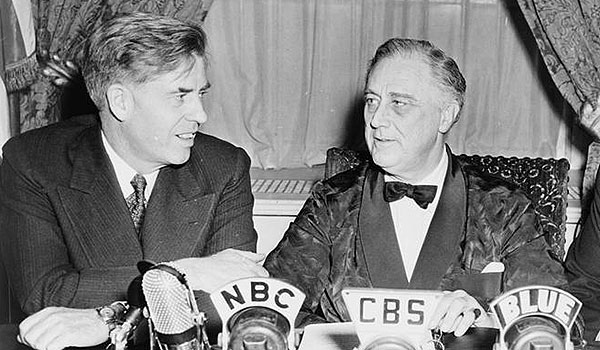 By late 1939 Roosevelt's plans regarding a possible third term in 1940 had become a major issue in national politics. The nation was divided over the subject of possible entry into the second world war, with there being both strong interventionist and isolationist factions. One Republican leader told a prominent newsman that Congressional distrust of FDR was affecting congressional consideration of whether or not the Neutrality Acts of 1930s would be amended. Even those who, like Roosevelt, supported selling weapons to Britain and France, claimed that Roosevelt would garner more support if only he would announce that he would not run for a third term. But Roosevelt's advisors believed that doing so would reduce the president's influence on Congress and the Democratic party. Roosevelt remained coy and would not announce his intentions until the summer of 1940.

Roosevelt remained mum on his plans throughout the winter, spring, and even into the summer of 1940. The long standing tradition of presidents refusing to serve more than two terms was not yet enshrined in the U.S. Constitution as the 22nd Amendment, but it had been established by President George Washington when he refused to run for a third term in 1796. The tradition was followed and respected by all subsequent presidents except for Ulysses Grant in 1880, and many concluded that Grant was punished for his hubris by not winning his party's nomination that year. But Roosevelt refused to give a definitive statement as to his willingness to be a candidate.

Roosevelt likely lost a friend and a strong supporter in his Postmaster General and party kingpin James Farley. Roosevelt had privately told Farley that he would not be a candidate again and that Farley could seek the nomination. Farley thus began his campaign behind the scenes.

Roosevelt told others of his plans not to run, including Secretary of State Cordell Hull and Secretary of Labor Frances Perkins. First Lady Eleanor Roosevelt was opposed to Roosevelt running for a third term. Many believed that Roosevelt had telegraphed his intentions in January 1940 when he signed a contract to write 26 articles a year for Collier's for three years after leaving the presidency in January 1941.

If Roosevelt actually had these intentions however, his mind was changed as Nazi Germany defeated France and threatened Britain in the summer of 1940. It was then that Roosevelt decided that he had to remain in office, rather than turning the reins of power over to someone lacking the necessary experience and skills to see the nation safely through the Nazi threat. His belief that no other Democrat would be a good war leader and also continue the New Deal (and also win the 1940 presidential election.)

Roosevelt wasn't alone in this thinking. The leading Democratic Party bosses were also concerned that no Democrat except Roosevelt could defeat the charismatic Wendell Willkie, who many believed would be (and ultimately was chosen as) the Republican candidate.

The 1940 Democratic National Convention was held at the Chicago Stadium in Chicago, Illinois from July 15 to July 18, 1940. Unlike today, when it is a foregone conclusion who the candidate will be, it was uncertain who the Democrats would choose as their standard bearer in the election. When the convention began, Farley and Vice President John Nance Garner were declared candidates, and Indiana Governor Paul McNutt was a possible candidate. Roosevelt had still not openly declared his candidacy.

At the convention Roosevelt dictated a message on the phone to Kentucky Senator Alben Barkley, which Barkley read out to the convention during on July 17th. The statement concluded with these words:

"The President has never had, and has not today, any desire or purpose to continue in the office of President, to be a candidate for that office, or to be nominated by the convention for that office. He wishes in earnestness and sincerity to make it clear that all of the delegates in this convention are free to vote for any candidate."

The statement was disingenuous, but when it was read, the convention sat in shocked silence for a moment. The silence was then broken by a voice thundering over the stadium loudspeakers: "We want Roosevelt! We want Roosevelt!" The voice was Thomas D. Garry, Superintendent of Chicago's Department of Sanitation (the sewers department), a friend and backer of Chicago Mayor Ed Kelly. Garry was stationed in a basement room with a microphone, waiting for that moment. Kelly had posted hundreds of Chicago city workers and precinct captains around the hall. Other Democratic bosses had also stacked the floor with their followers. All of them joined Garry's chant. In what was staged to appear as a spontaneous demonstration, seconds, hundreds of delegates joined in, pouring into the aisles, carrying state delegation standards. Whenever the chant began to die down, state chairmen at their party bosses' direction, had microphones connected to the speakers and added their own endorsements of support for Roosevelt's renomination.

A Life magazine reporter later wrote of the event that "the shabby pretense fooled nobody" and he called the bogus draft-Roosevelt movement "one of the shoddiest and most hypocritical spectacles in US history". The next day Roosevelt was nominated by an 86% majority. He received an overwhelming 986 votes on the first ballot. Farley finished second with 72. 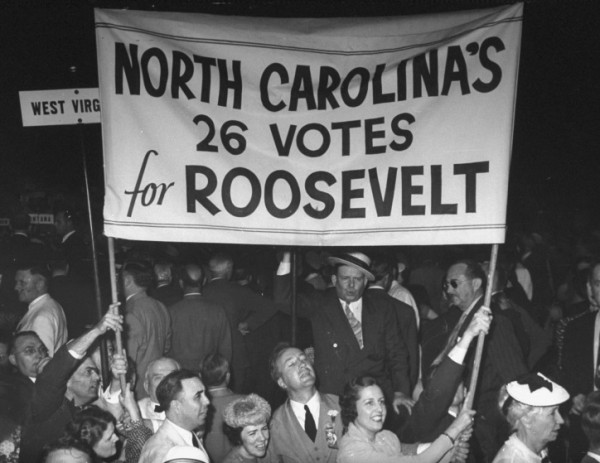 Incumbent Vice President John Nance Garner opposed Roosevelt's re-election, and it was clear that he would not be on the ticket for the upcoming election. Roosevelt had wanted Secretary of State Cordell Hull to serve as his running mate, but Hull preferred to remain in his Cabinet position. Roosevelt's aides also strongly pressed for South Carolina Senator James F. Byrnes to be selected, but the president settled on Secretary of Agriculture Henry A. Wallace. Farley was considered, but was not selected, because both he and Roosevelt were from New York State. Others considered were Kentucky Senator Alben Barkley, Supreme Court Justice William O. Douglas, and Speaker of the United States House of Representatives William B. Bankhead of Alabama. Roosevelt chose Wallace because Wallace was a firm supporter of the New Deal and also of aid to Britain. He hoped that Wallace would appeal to agricultural and mid-west voters.

First Lady Eleanor Roosevelt had flown to Chicago to campaign. After her husband's nomination, she gave what came to be known as her "No Ordinary Time" speech in support of Wallace. Many Democrats regarded Wallace as a mystic, an intellectual, and even a flake, but the delegates showed deference to the President's choice and Wallace won the nomination on the first ballot.

The Roosevelt–Wallace ticket defeated the Republican ticket to win the 1940 presidential election. Roosevelt's decision to select his own running mate set a powerful precedent, and presidential candidates after 1940 became much more influential in the choice of their running mate. 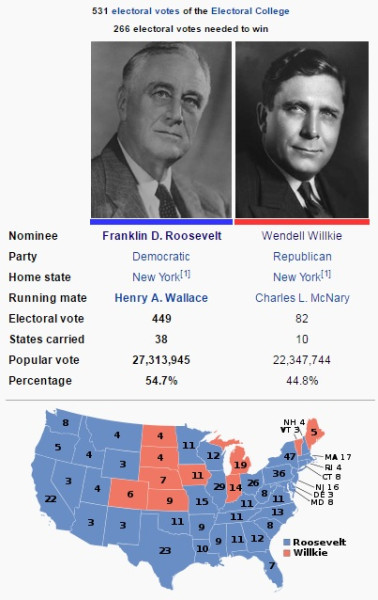 Franklin D. Roosevelt accepted his party's nomination after the convention had closed. Shortly after midnight Eastern time on the morning of July 19, 1940, Roosevelt delivered his acceptance speech from the White House in front of news radio microphones and newsreel cameras. Filmed footage of his speech was sent to New York City, where it was developed and excerpts were aired on television at 3:30 Eastern time, making Roosevelt the first incumbent president to be shown on television accepting his party's nomination.
Collapse