On July 16, 1945 (76 years ago today) the United States tested the first atomic bomb near Alamogordo, New Mexico. The following month dropped atomic bombs on Hiroshima and Nagasaki in Japan, bringing about the end of World War II. The creation of the bomb and its subsequent use ushered in the nuclear age and led to one of the most controversial decisions made by any President.

Truman became Franklin D. Roosevelt's running mate in the 1944 election because of a compromise. Many saw Roosevelt's Vice-President at the time, Henry Wallace, as too far left. Roosevelt's choice for a new running mate was said to be Supreme Court Justice William O. Douglas, or his key advisor James Byrnes. But Byrnes was seen as offensive to northerners and Douglas was seen as offensive to southerners, so Senator Harry Truman was selected as an acceptable compromise. Everyone knew, going into the election, that Roosevelt's health was not good, and on April 12, 1945, Roosevelt died and Vice-President Truman became President Truman. He said to reporters, shortly after taking the oath of office, "Boys, if you ever pray, pray for me now. I don't know if you fellas ever had a load of hay fall on you, but when they told me what happened yesterday, I felt like the moon, the stars, and all the planets had fallen on me." 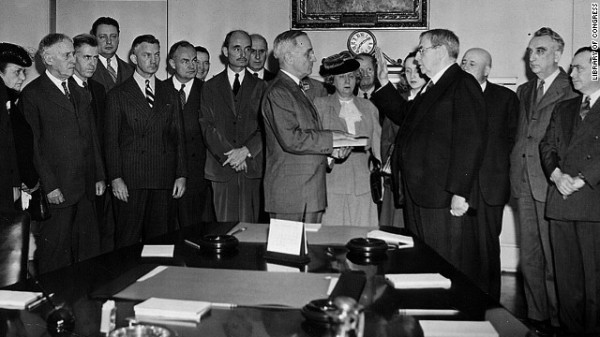 When he became President, World War II was raging on. Truman asked all the members of FDR's cabinet to remain. But he also told them that he would be the one making decisions, and while he welcomed their advice, they were expected to support him. On the day he was sworn in, Truman was told that the Allies had a new, highly destructive weapon, but it was not until April 25 that Secretary of War Henry Stimson told him the details. He wrote in his diary "We have discovered the most terrible bomb in the history of the world. It may be the fire destruction prophesied in the Euphrates Valley Era, after Noah and his fabulous Ark."

Truman was pleased to receive the news of the Allies' success in Europe and to issue the proclamation of V-E Day (Victory in Europe) on May 8, 1945, his 61st birthday. Following the Allied victory, Truman journeyed to Europe for the Potsdam Conference. He was there when he learned that the Trinity test of the first atomic bomb on July 16, 1945 had been successful. He told Soviet leader Joseph Stalin that the U.S. was about to use a new kind of weapon against the Japanese. This was the first time the Soviets had been officially given any information about the atomic bomb, but Stalin knew about the bomb project before Truman, through his spy network.

In August, after the Imperial government of Japan refused surrender demands, Truman authorized the atomic bombing of Japan. Warnings were sent to the Japanese in advance, but these warnings elicited no response. Truman was not sure how devastating the explosions or the aftermath of the bombs would be. He was not inclined to be merciful towards the Japanese because he believed that the Japanese had committed terrible atrocities on their prisoners. After almost four years of war, Truman wanted to bring the conflict to a swift end.

Truman always believed that his decision to bomb Japan saved life on both sides. Military estimates for an invasion of the Japanese home islands projected that it would take a year and result in 250,000 to 500,000 American casualties. Scientist Ernest Lawrence had suggested giving the Japanese a non-combat demonstration, but this idea was rejected for a variety of reasons, including the fear that Allied prisoners of war might be moved to potential bomb sites. Truman gave the go-ahead to drop the atomic bomb on the Japanese. Hiroshima was bombed on August 6 and Nagasaki on the 9th. When the Japanese were still slow to surrender, Truman ordered a massive conventional air raid on Tokyo for August 13. The Japanese agreed to surrender the following day.

Supporters of Truman's decision argue that, given the tenacious Japanese defense of the outlying islands, the bombings saved hundreds of thousands of lives that would have been lost invading mainland Japan. Others have argued that the use of nuclear weapons was unnecessary and inherently immoral. Truman wrote, later in life, that, "I knew what I was doing when I stopped the war. I have no regrets and, under the same circumstances, I would do it again."

Many others believe that it was a mistake to drop the bomb, including Truman's successor as President, Dwight Eisenhower, who wrote in his autobiography The White House Years - Mandate for Change at pages 312-3:

"In 1945, Secretary of War Stimson visited my headquarters in Germany, and informed me that our government was preparing to drop an atomic bomb on Japan. I was one of those who felt that there were a number of cogent reasons to question the wisdom of such an act. During his recitation of the relevant facts, I had been conscious of a feeling of depression and so I voiced to him my grave misgivings, first on the basis of my belief that Japan was already defeated and that dropping the bomb was completely unnecessary, and second because I thought that our country should avoid shocking world opinion by the use of a weapon whose employment was, I thought, no longer mandatory as a measure to save American lives. It was my belief that Japan was, at that very moment, seeking some way to surrender with a minimum loss of 'face.' The Secretary was deeply perturbed by my attitude, almost angrily refuting the reasons I gave for my quick conclusions." 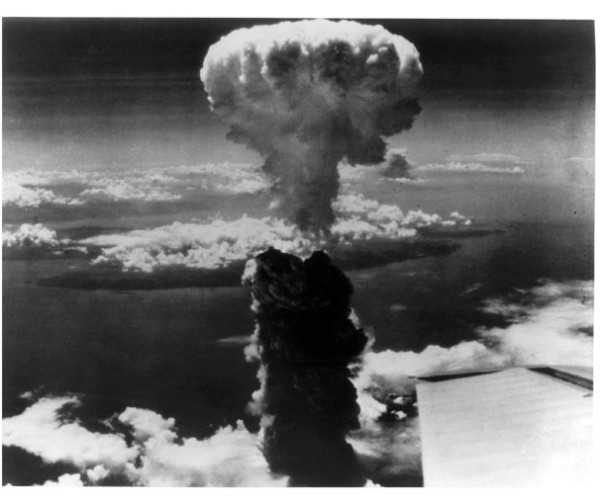 Truman's decision continues to be the subject of debate to this day. It is one from which he never wavered.
Collapse