Ronald Reagan was called the Great Communicator for his ability to get his message across to the American people in a manner that appeared to convey leadership, confidence and calm. It was a skill his predecessor Jimmy Carter was not as gifted in. Carter, in a manner that appeared to be more idealistic, felt that giving the American people bad news in a straightforward and unvarnished manner was the best way to bring about support for his policies in a form of political "tough love." While this approach may have shown more candor, it wasn't necessarily the most politically profitable approach. One of the best examples of this is found in a speech that Carter gave on July 15, 1979 (42 years ago today) in which came to be known as Carter's "malaise speech."

The term "malaise" is defined as "a general feeling of discomfort, illness, or uneasiness whose exact cause is difficult to identify." Carter's Presidency had been a rocky time economically in the United States. Interest rates had climbed as high as 21% and the energy crisis of the day resulted in long lineups at the gas pumps. The nation was undergoing what became known as the "energy crisis." By July 15, 1979, Carter had already given four speeches to the nation on the subject of energy and he planned to give a fifth one, but he was afraid no one was listening to him any more. He probably was right. On July 15, 1979, Carter gave a nationally-televised address, speaking about what he called a "crisis of confidence" among the American people. This became known in the media as his "malaise" speech. In the speech, he said:

"I want to talk to you right now about a fundamental threat to American democracy... I do not refer to the outward strength of America, a nation that is at peace tonight everywhere in the world, with unmatched economic power and military might. The threat is nearly invisible in ordinary ways. It is a crisis of confidence. It is a crisis that strikes at the very heart and soul and spirit of our national will. We can see this crisis in the growing doubt about the meaning of our own lives and in the loss of a unity of purpose for our nation... In a nation that was proud of hard work, strong families, close-knit communities, and our faith in God, too many of us now tend to worship self-indulgence and consumption. Human identity is no longer defined by what one does, but by what one owns. But we've discovered that owning things and consuming things does not satisfy our longing for meaning... I'm asking you for your good and for your nation's security to take no unnecessary trips, to use carpools or public transportation whenever you can, to park your car one extra day per week, to obey the speed limit, and to set your thermostats to save fuel... I have seen the strength of America in the inexhaustible resources of our people. In the days to come, let us renew that strength in the struggle for an energy-secure nation."

Three days after the speech, Carter asked for the resignations of all of his Cabinet officers, and ultimately accepting those of five who had clashed with the White House the most. These inclided Energy Secretary James Schlesinger and Health, Education and Welfare Secretary Joseph Califano, the latter who was known as a supporter of Senator Ted Kennedy. Carter broke a campaign promise that he would never appoint a Chief of Staff by appointing Hamilton Jordan, as a new White House Chief of Staff. Jordan circulated a "questionnaire" that read more like a loyalty oath.

Carter's Vice-President, Walter Mondale, later said "I think the idea was that they were going to firm up the administration, show that there was real change by these personnel changes, and move on. But the message the American people got was that we were falling apart."

Here is a video of part of the speech:

At first, the initial reaction to Carter's speech was generally positive. But soon it became apparent that Carter had made a mistake in forcing out several of his cabinet members, fracturing the support he had within the party. Congress approved a $227 billion windfall profits tax and passed the Energy Security Act. The Energy Security Act established the Synthetic Fuels Corporation, which was charged with developing alternative energy sources. Despite those legislative victories however, in 1980 Congress rescinded Carter's imposition of a surcharge on imported oil. They also rejected his proposed Energy Mobilization Board, a government body that was designed to facilitate the construction of power plants. Carter's policies contributed to a decrease in per capita energy consumption, which dropped by 10 percent from 1979 to 1983. Oil imports, which had reached a record 2.4 billion barrels in 1977 (50% of the nation's supply), declined by half from 1979 to 1983. 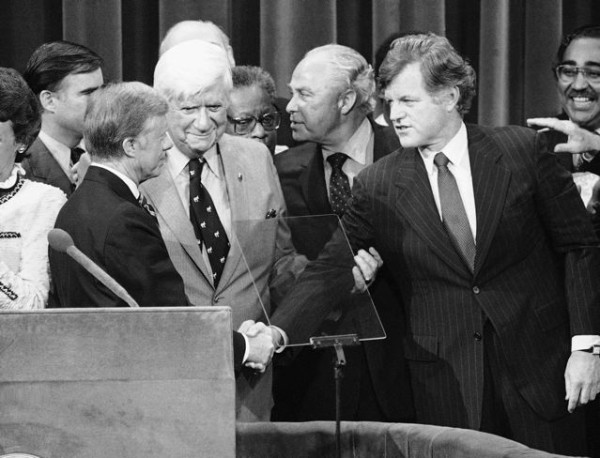 The final months of Carter's presidential tenure was marked by several additional major crises, including the Iran hostage crisis. Ted Kennedy, a prominent liberal Democrat, was unhappy with Carter's opposition to a national health insurance system. He challenged Carter in the 1980 Democratic primaries. Boosted by public support for his policies in late 1979 and early 1980, Carter went on to defeat Kennedy and win re-nomination, but did so at a cost of making it appear that his leadership on the party was tenuous. In the general election, Carter faced Reagan, a conservative former governor of California. Reagan won a decisive victory. In polls of historians and political scientists, Carter is usually ranked as a below-average president. He is however given high marks for his activities in his post-presidency for humanitarian causes across the globe.
Collapse