On July 14, 1913 (108 years ago today) Gerald Rudolph Ford, Jr. was born in Omaha, Nebraska. When he was born his name was Leslie Lynch King Jr. He would later change his name because his birth father, Leslie Lynch King Sr., was physically abusive to Ford's mother and he preferred to honor his mother's second husband, a much kinder man and more of a father figure to the future 38th President. 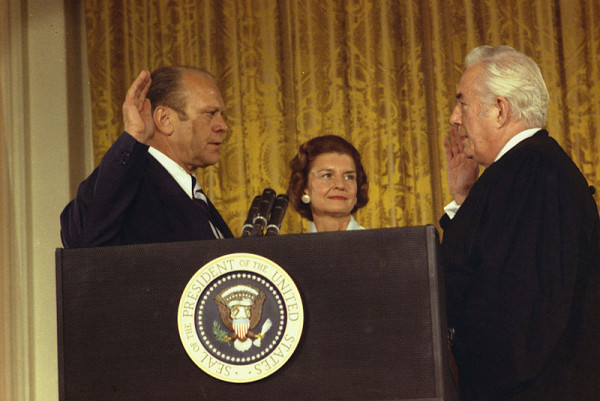 His mother was Dorothy Ayer Gardner. His abusive birth father was a wool trader and son of a prominent banker Charles Henry King. Dorothy separated from King just sixteen days after her son's birth. She took her son with her to the Oak Park, Illinois home of her sister Tannisse and brother-in-law, Clarence Haskins James. From there, she moved to the home of her parents, Levi Addison Gardner and Adele Augusta Ayer in Grand Rapids, Michigan. Dorothy Gardner divorced King in December 1913 and she gained full custody of her son. Ford's paternal grandfather Charles Henry King paid child support until shortly before his death in 1930. Ford later said his biological father had a history of hitting his mother. According to Ford's biographer Lou Cannon, the Kings' separation and divorce was the result of an incident which occurred a few days after Ford's birth, when Leslie King threatened to kill Dorothy while brandishing a butcher knife. King had first hit his wife on their honeymoon for smiling at another man.

After two and a half years with her parents, on February 1, 1916, Dorothy married Gerald Rudolff Ford, a salesman in a family-owned paint and varnish company. They then called her son Gerald Rudolff Ford, Jr. The future president was never formally adopted, however, and he did not legally change his name until December 3, 1935. Ford later said "My stepfather was a magnificent person and my mother equally wonderful. So I couldn't have written a better prescription for a superb family upbringing."

Ford attended the University of Michigan as an undergraduate, where he played center, linebacker and long snapper for the school's football team the Wolverines. The team had undefeated seasons and won national titles in 1932 and 1933. But it suffered a steep decline in his 1934 senior year, however, winning only one game. However despite the team's poor performance that year, Ford was one of the team's stars.

Gerald Ford spent the summer of 1937 as a student at the University of Michigan Law School and was admitted in spring 1938 to Yale Law School where he earned his LL.B. degree in 1941, graduating in the top 25 percent of his class. His introduction to politics came in the summer of 1940 when he worked in Wendell Willkie's presidential campaign. In 1941, he was admitted to the Michigan bar and in May of that year, he opened a Grand Rapids law practice with a friend, Philip W. Buchen, who would later serve as Ford's White House counsel. In December of 1941, following the attack on Pearl Harbor, Ford enlisted in the Navy. In May of 1943 he served on the carrier USS Monterey. During the spring of 1944, the Monterey supported landings at Kwajalein and Eniwetok and participated in carrier strikes in the Marianas, Western Carolines, and northern New Guinea, as well as in the Battle of the Philippine Sea. From September to November 1944, aircraft from the Monterey launched strikes against Wake Island, participated in strikes in the Philippines and Ryukyus, and supported the landings at Leyte and Mindoro.

On October 15, 1948, Ford married Elizabeth (Betty) Bloomer Warren, a department store fashion consultant, at Grace Episcopal Church in Grand Rapids. Warren had been a John Robert Powers fashion model and a dancer in the auxiliary troupe of the Martha Graham Dance Company. She had previously been married to and divorced from William G. Warren. At the time of his engagement, Ford was campaigning for what would be his first of thirteen terms as a member of the United States House of Representatives. The wedding was delayed until shortly before the elections because, as Betty Ford later stated, "Jerry was running for Congress and wasn't sure how voters might feel about his marrying a divorced ex-dancer." Ford served nearly 25 years as the Representative from Michigan's 5th congressional district, eight of them as the Republican Minority Leader. He was also a member of the Warren Commission which investigated the assassination of John F. Kennedy.

After a distinguished career in Congress, Ford became the first person appointed to the vice-presidency under the terms of the 25th Amendment (after Richard Nixon's Vice President Spiro Agnew resigned.) He became President upon Richard Nixon's resignation on August 9, 1974, and became the only President of the United States who was never elected President nor Vice-President by the Electoral College.

As President, Ford signed the Helsinki Accords with the Soviet Union, marking a move toward détente in the Cold War. With the conquest of South Vietnam by North Vietnam nine months into his presidency, U.S. involvement in Vietnam essentially ended on his watch. Domestically, Ford presided over a terrible economy with growing inflation and a bad recession coupled with high consumer interest rates. His most controversial act was his granting of a presidential pardon to President Richard Nixon for his role in the Watergate scandal. Ford also escaped two assassination attempts, both by female would-be assassins.

In 1976, Ford survived a challenge by Ronald Reagan for the Republican nomination, but lost the presidential election to Democrat Jimmy Carter. 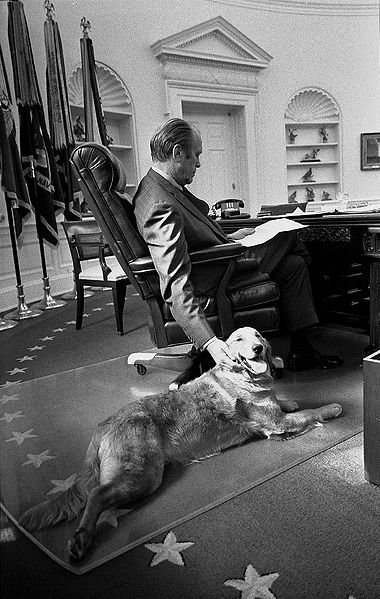 Following his years as president, Ford remained active in the Republican Party. Asked in an 1978 interview about his life in retirement, Mr. Ford said that he was having trouble with chipping and putting in his golf game, but otherwise, “everything is wonderful.” After experiencing health problems, Ford died in his home on December 26, 2006. Ford lived longer than any other U.S. president up to that time, living 93 years and 165 days, while his 895 day presidency remains the shortest of all Presidents who did not die in office.
Collapse