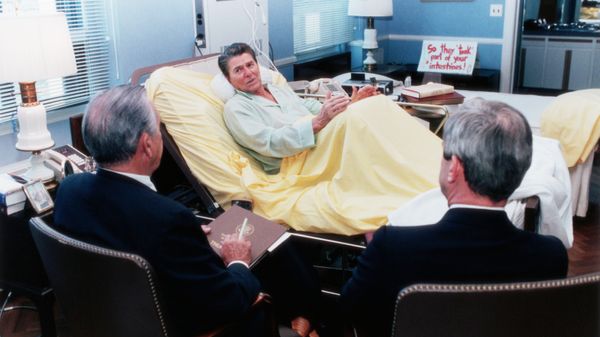 In Reagan's case, the surgery lasted just under three hours and was successful. Reagan resumed the powers of the presidency later that day. The previous day, July 12, 1985, Ronald Reagan underwent a colonoscopy and was diagnosed with bowel cancer. He elected to have the lesion removed immediately. He consulted with White House counsel Fred Fielding about whether to invoke Section 3, and in particular about what kind of precedent would be set if he did so. Fielding and White House Chief of Staff Donald Regan recommended that Reagan transfer power. Two letters were drafted: one specifically invoking Section 3, the other mentioning only that Reagan was mindful of its provisions. Reagan did not formally invoke section 3. On July 13, Reagan signed the second letter before being placed under general anesthesia for a colectomy. Vice President George H. W. Bush was acting president from 11:28 a.m. until 7:22 p.m., when Reagan transmitted a letter declaring himself able to resume his duties.

Reagan spent a week convalescing at the hospital before returning to the White House. After the surgery, Reagan quipped, “Well, I’m glad that’s all out.” He told reporters that he planned to live a long time. At the time Reagan was 74, and was then the nation’s oldest serving president. 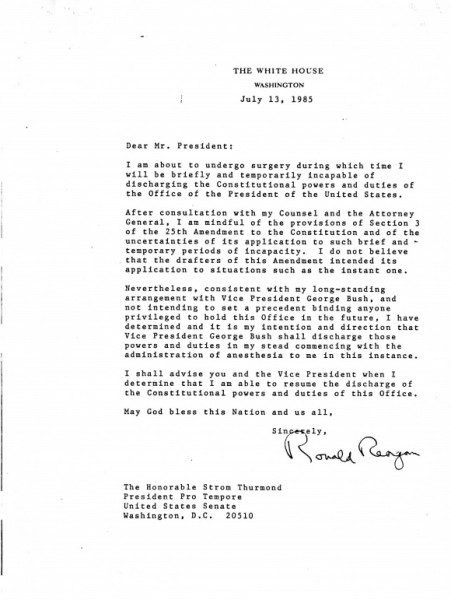 Although Reagan never formally invoked section 3, Fordham Law Review commentator John Feerick argues that this is in fact what Reagan did. He posits that although Reagan disclaimed any use of the Twenty-fifth Amendment in his letter, he followed the process set forth in Section 3. Feerick argues that "no constitutional provision except the Twenty-Fifth Amendment would have allowed" him to designate the vice president as acting president.

In his memoir, Reagan later agreed with this position and stated that he had in fact, invoked the Twenty-fifth Amendment.
Collapse