Mark Hatfield was a two-term Governor of Oregon and represented the state in the US Senate for 30 years. He was born on July 12, 1922 (99 years ago today.) What is remarkable about Senator Hatfield and what makes his worthy of note in a blog about Presidential History is that he was a stellar example of how the senate once operated in a bipartisan manner and how Senators from both parties once cooperated to get things done, ignoring their political labels. Hatfield co-sponsored legislation with the likes of Ted Kennedy and George McGovern. He was the only Senator who voted to support the nomination to the US Supreme Court of both Thurgood Marshall and Clarence Thomas. His efforts as a Senator were said to have led to billions of dollars in federal appropriations being spent on projects in Oregon, including funding for transportation projects, environmental protection of wilderness areas and scenic rivers, research facilities, and health care facilities.

His full name was Mark Odom Hatfield and he was born in Dallas, Oregon. His father was a blacksmith and his mother was a school teacher. On June 10, 1940, as a 17-year-old, Hatfield was driving his mother's car, which struck and killed a pedestrian, Alice Marie Lane, as she crossed the street. Hatfield was not held criminally liable for the crash, but was found civilly liable to the family.

Hatfield graduated from Salem High School (now North Salem High School) in 1940 and then enrolled at Willamette University, also in Salem. He graduated from Willamette in 1943 with a Bachelor of Arts degree and joined the U.S. Navy after graduation. He served in the second World War, and saw service at the battles at Iwo Jima and Okinawa as a landing craft officer. As a lieutenant, he also witnessed the effects of the atomic bombing of Hiroshima, as one of the first Americans to see the ruins of the city. It is believed that this led to his later opposing arms proliferation and the Vietnam War when he was a Senator. Later he served in French Indochina (now Vietnam) where he witnessed firsthand the wealth divide between the peasant Vietnamese and the colonial French. After his discharge, he spent one year at Willamette's law school, but changed his study to political science where he earned a graduate degree from Stanford University and a Masters Degree in Political Science in 1948. before returning to Oregon and Willamette as a professor.

While still teaching, Hatfield served in both houses of the Oregon Legislative Assembly. A lifelong Republican, he won election to the Oregon Secretary of State's office at the age of 34 and two years later was elected as the 29th Governor of Oregon. He was the youngest person to ever serve in either of those offices, and served two terms as governor before election to the United States Senate. In the Senate he served for thirty years, and now holds the record for longest tenure of any Senator from Oregon. In 1968, he was considered a candidate to be Richard Nixon's running mate for the Republican Party presidential ticket. 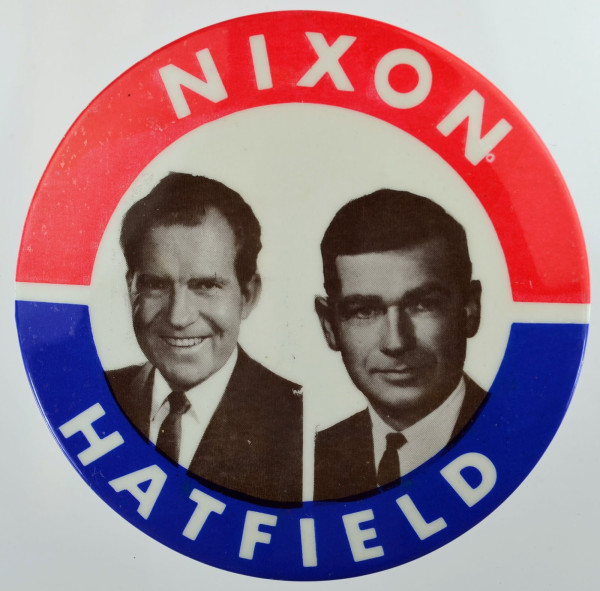 Hatfield served as Chairman of the Senate Committee on Appropriations on two occasions. With this role, he was able to direct funding to Oregon and research-related projects. Numerous Oregon institutions, buildings and facilities are named in his honor, including the Mark O. Hatfield United States Courthouse in Portland, the Mark O. Hatfield Library at Willamette University (his alma mater), the Hatfield Government Center light-rail station in Hillsboro, the Mark O. Hatfield School of Government in the College of Urban and Public Affairs at Portland State University, and the Hatfield Marine Science Center in Newport. Outside of Oregon, a research center at the National Institutes of Health is also named in his honor for his support of medical research while in the Senate.

As a senator, it was hard to label Hatfield. He took positions that were considered liberal and others that were considered conservative. Hatfield was pro-life on the issues of abortion and the death penalty, eve though he was a prominent evangelical Christian. He opposed government-sponsored school prayer and supported civil rights legislation for minorities. Hatfield voted in favor of the Civil Rights Act of 1968 and the Civil Rights Restoration Act of 1987. He also voted for the nomination of Thurgood Marshall to the Supreme Court and for the bill establishing Martin Luther King Jr. Day as a federal holiday. Hatfield voted against the Supreme Court nominations of Clement Haynsworth and George Harrold Carswell, but voted in favor of the nominations of conservatives William Rehnquist, Robert Bork and Clarence Thomas. Hatfield was at odds with Nixon over Vietnam, and he threatened to reduce funding for the White House's legal department in 1973 during the Watergate Scandal.

Hatfield often reached across the aisle to co-sponsor bipartisan legislation with Democrats. In 1970, with Senator George McGovern he co-sponsored the McGovern-Hatfield Amendment, which called for a complete withdrawal of U.S. troops from Vietnam. He proposed legislation called the "Neighborhood Government Act" which he repeatedly introduced in congress. The law proposed to allow Americans the right to divert their personal federal tax money from Washington to their local community. He said that it was his long-term goal was to have all social services provided at the neighborhood level. In the 1980s, Hatfield co-sponsored nuclear freeze legislation with Senator Edward M. Kennedy, and the two men co-authored a book on the topic. He also advocated for the closure of the N-Reactor at the Hanford Nuclear Site in the 1980s, but he supported nuclear fusion programs. He was for the closure of the N-Reactor because it was used for producing weapons grade plutonium while also producing electricity.

In 1981, Hatfield served as the chairman of the Congressional Joint Committee on Presidential Inaugurations, overseeing the first inauguration of Ronald Reagan in January of that year. But later that year, on December 2, 1981, Hatfield was one of four senators to vote against an amendment to President Reagan's MX missiles proposal that would divert the silo system by $334 million as well as earmark further research for other methods that would allow giant missiles to be based.

Hatfield frequently broke with his party on issues of national defense and foreign policy in support for non-interventionism. He often opposed increased military spending and opposed the ban on travel to Cuba. He was the lone Republican to vote against the 1981 fiscal year's appropriations bill for the Department of Defense. In 1991, Hatfield voted against authorizing military action against Iraq in the first Gulf War, one of only two members of his party to do so in the Senate.

He was rated as the sixth most respected senator in a 1987 survey by fellow senators. He retired from the Senate in 1997. He had never lost an election in 46 years of political life. After retiring from political office, he returned to Oregon where he joined the faculty of George Fox University in Newberg, Oregon. In 2006, he was named the Herbert Hoover Emeritus Distinguished Professor of Politics at the school. He also taught at the Hatfield School of Government at Portland State University, which is named in his honor, and lectured at Willamette University and Lewis & Clark College while living in Portland. 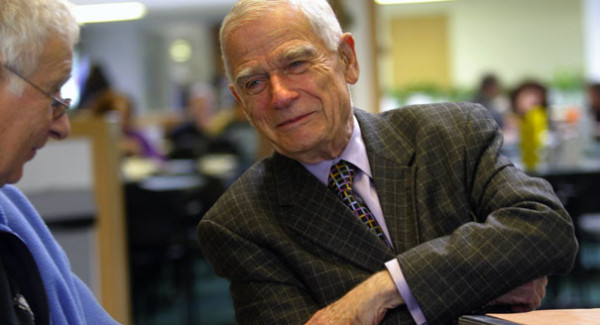 Hatfield was admitted to the Mark O. Hatfield Clinical Research hospital at the National Institutes of Health in Maryland in November 2010 for observation after his health began to decline. Mark Hatfield died at a care facility in Portland on August 7, 2011, after several years of illness. He remains an example of a time when Senators could vote their conscience and were free to work collaboratively with members of the other party.
Collapse