On July 11, 1767 (254 years ago today) John Quincy Adams, the 6th President of the United States, was born in Braintree (now Quincy), Massachusetts. He was the second child and oldest son of John and Abigail Adams. 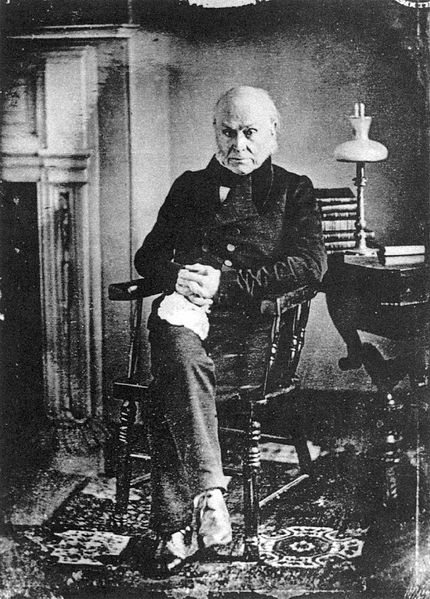 Much of Adams' youth was spent accompanying his father overseas. The elder Adams served as an American envoy to France from 1778 until 1779 and to the Netherlands from 1780 until 1782. John Quincy Adams accompanied his father on these trips.Schooled by his father in the art of diplomacy, John Quincy Adams served as an American diplomat, and went on to become a US Senator, and later a member of the House of Representatives. Over the course of his long and distinguished political career he was a member of five political parties: the Federalist, Democratic-Republican, National Republican, Anti-Masonic and Whig parties. He was Minister (Ambassador) to four different countries: the Netherlands, Prussia, Russia and Great Britain. As a diplomat, he played an important role in negotiating many prominent international treaties, the most famous of which was the Treaty of Ghent, which ended the War of 1812.

He served as Secretary of State under President James Monroe, and in that capacity he negotiated with Great Britain over America's northern border with Canada, with Spain concerning the annexation of Florida, and he authored the Monroe Doctrine. Many historians believe that he was one of the greatest diplomats and secretaries of state in American history.

You would think that such a great diplomat would get along with others and become a great President. He succeeded Monroe as President in the disputed election of 1824, finishing second in both popular and electoral vote to Andrew Jackson. The election was decided by Congress in what his opponents called "a corrupt bargain" after Henry Clay threw his support to Adams. Clay later became Secretary of State in the Adams administration.

Adams tried to modernize the American economy and promoted education. Part of his political agenda was to pay off much of the national debt. But he was stymied by a Congress controlled by his opponents, and his lack of patronage appointments didn't endear him to those in his own party. Building political consensus and coalitions was not his strong suit. He lost his 1828 bid for re-election to Andrew Jackson. This made him the first President since his father to serve a single term.

Adams didn't retire from the Presidency quietly. He was elected a U.S. Representative from Massachusetts after leaving office, the only president ever to do so, serving for the last 17 years of his life. In Congress he launched a passionate campaign against slavery, even to the point where gag orders were passed attempting to prevent him from discussing the subject on the floor of the House. He tried to ignore them or find ways around them. He even went so far as to argue a leading anti-slavery case (the Amistad) before the Supreme Court of the United States. Adams correctly predicted that if a civil war was to break out, the president could abolish slavery by using his war powers. Adams also predicted the Union's dissolution over the slavery issue, but said that if the South became independent there would be a series of bloody slave revolts. 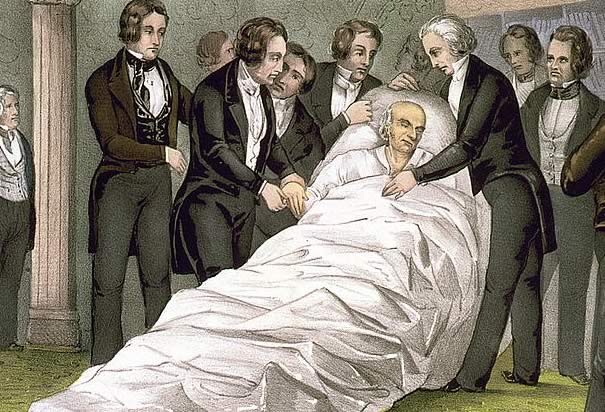 On February 21, 1848, the House of Representatives was discussing the matter of honoring US Army officers who had served in the Mexican War. Adams had been opposed to the war because he believed its motive to be the expansion of slavery. When the rest of the house erupted into 'ayes' in support of the motion, Adams cried out, 'No!' He rose to answer a question from the Speaker of the House. He then immediately collapsed, having suffered a massive cerebral hemorrhage. Two days later, on February 23, he died with his wife and son at his side in a bed placed in the Speaker's Room inside the Capitol Building in Washington, D.C. His last words were "This is the last of earth. I am content." He passed away at 7:20 p.m.
Collapse