In May and June of 1939, King George VI and Queen Elizabeth (who later became colloquially known as "the Queen Mum") toured Canada and the United States, in an effort to lobby US support for the allied cause in what was certain to soon be a war with Germany. This was the first visit of a reigning British monarch to North America, although before becoming King, George had visited Canada. The Royal Couple landed in Ottawa, Canada's capital city, where they were accompanied by Canadian Prime Minister William Lyon Mackenzie King. While in Ottawa, on May 19th, King George personally accepted and approved the Letter of Credence of the new U.S. Ambassador to Canada, Daniel Calhoun Roper. 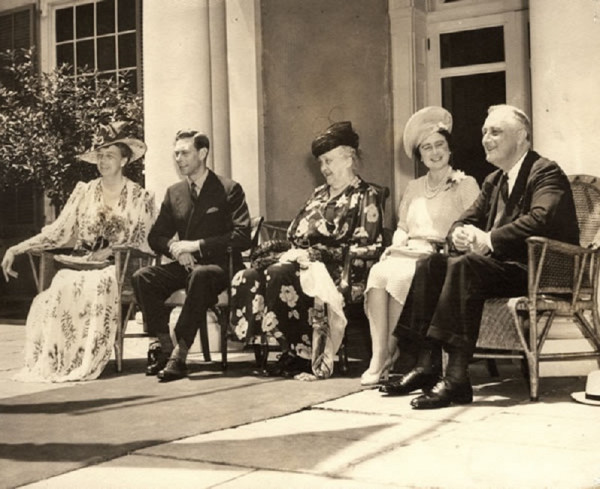 The trip had the goal both of countering the strong isolationist tendencies among the North American public in light of the developing tensions in Europe, as well as to elicit support for the United Kingdom in any future war with Germany. The King and Queen were enthusiastically received by the public. From Canada, the King and Queen visited the 1939 New York World's Fair. Their visit to New York included a meeting with the President of the United States. But rather than limit the visit to the White House, the Royals stayed with President Franklin D. Roosevelt both at the White House and at his private estate at Hyde Park, New York. It was reported that the two heads of state got along famously and that a strong bond of friendship was forged between the King and Queen and the President during the tour. The "special relationship" would have major significance in the relations between the United States and the United Kingdom through the war years that were soon to follow. 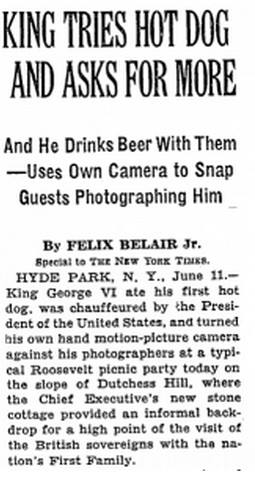 In total, George and Elizabeth spent four days in the US. Their royal visit included a sight-seeing tour of Washington, a formal State Dinner and a big bash at the British Embassy. But perhaps the most memorable scene from the trip was a picnic held at Roosevelt's home at Hyde Park, where the king had his first-ever hot dog. On June 11, 1939, the King and Queen joined FDR and others at his Hyde Park “cottage” in New York for the informal picnic. The menu, as quoted by English, included “Hot Dogs (if weather permits).” The weather did indeed permit, thankfully for the making of a great story. The next day's headline in the New York Times read "KING TRIES HOT DOG AND ASKS FOR MORE”. According to reporter Felix Belair Jr., the King enjoyed his two hot dogs with beer. But unlike today when this would be a photo op moment, the King ate his hot dog away from prying eyes. Some members of the party had cameras, but no reporters were present and regular photographers were barred.

Another Times reporter, Dan Barry, wrote: “In the formal language of diplomacy, perhaps, the presentation of a hot dog may say: ‘On behalf of the United States of America, may we offer you this tubular delight of meat, meat byproducts, curing agents and spices?’ But what it really says is: ‘How ya doin’? Wanna beer?’” His colleague Belair wrote "It would be difficult to imagine a more representative cross-section of American democracy than was to be found among the relatives, friends and neighbors of the Roosevelts who received invitations to the picnic.” The royals were introduced to the Roosevelts’ staff, including one employee who brought nine of his ten children.

The King and Queen were said to have enjoyed the opportunity for informality. While the hot dogs were served on a silver tray, they nevertheless joined everyone else in eating off paper plates. According to one report, the queen supposedly asked Roosevelt how one ate a hotdog. FDR replied, “Very simple. Push it into your mouth and keep pushing it until it is all gone.” But she elected to use a knife and fork instead.

FDR even drove the party up to the cottage in “his own specially equipped automobile”, code for a car equipped with hand controls so that the paraplegic President could drive. After lunch the king and the president went swimming. They had also swam together in the pool that the paralyzed Roosevelt had installed at the White House to help him get exercise.

World War II broke out in Europe just months later. While on the visit, King George’s notes from the visit reveal that he and Roosevelt were secretly joined by Canada’s Prime Minister Mackenzie King for a brief discussion among the three on wartime strategy.

The King and Queen made the visit in response to a visit from Roosevelt sent in 1938. In his invitation to the king, Roosevelt also suggested he visit the 1939 World's Fair in New York, and wrote that Hyde Park might be a good place for a visit, as it's "on the direct route between New York City and Canada. It occurs to me that a Canadian trip would be crowded with formalities and that you both might like three or four days of very simple country life at Hyde Park," he wrote. 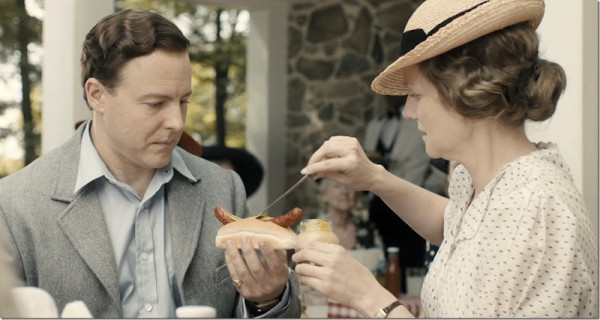 This Royal visit is the setting for the 2012 movie Hyde Park on the Hudson, which stars Saturday Night Live alumni Bill Murray as FDR, Samuel West as King George VI, Olivia Coleman as Queen Elizabeth and Olivia Williams as Eleanor Roosevelt.
Collapse