Where I live, the supermarkets are full of this year's crop of cherries. They're a nice dark red shade, very juicy and very tasty. Cherries remind me of the story of how a mixture of bad cherries and milk supposedly caused the death of President Zachary Taylor on July 9, 1850, (171 years ago today). It was on that date that Taylor, the 12th President of the United States, died in Washington, D.C. at the age of 65. He was the second president to die in office (coincidentally, both the first and second such were former generals in their sixties and they were the only two Whig candidates to be elected president.) Taylor served as President for just over sixteen months, from March 1849 until his death. Often underestimated by his adversaries, both military and political, I believe that Taylor would have been a very good President, had he lived to complete at least one term in office. 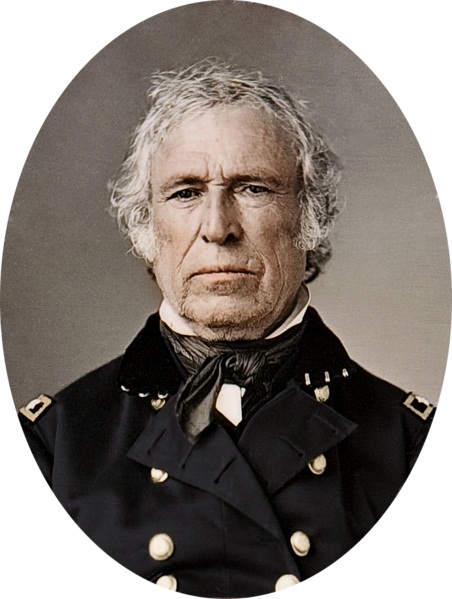 Taylor was born on November 24, 1784, on a plantation in Orange County, Virginia, to a prominent family. His ancestors had come to the United States aboard the Mayflower. His father, Richard Taylor, had served as a lieutenant colonel in the American Revolution, and his second cousin was James Madison. As a youth his family left Virginia and settled near Louisville, Kentucky.

On May 3, 1808 Taylor joined the U.S. Army, receiving a commission as a second lieutenant. Taylor was a career officer in the Army, rising to the rank of major general. He fought in the War of 1812, the Black hawk War and the Second Seminole War, but gained national status as a military hero as a result of his victories in the Mexican-American War. In 1845, as the annexation of Texas was underway, President James K. Polk dispatched Taylor to the Rio Grande area in anticipation of a potential battle with Mexico over the disputed Texas-Mexico border. The Mexican–American War broke out in May 1846, and Taylor led American troops to victory in a series of battles. There Taylor was the victorious commander at the battles of Palo Alta, Resaca de la Palma and Monterrey, winning against greater numbers. He became a national hero, and political clubs sprung up to draw him into the upcoming 1848 presidential election.

The Whig Party convinced the reluctant Taylor to run at the top of their ticket in the next election, despite his lack of interest in politics. No one knew for sure which if any political party he supported. Taylor won the election, running on a ticket with U.S. Representative Millard Fillmore of New York, defeating Democratic candidate Lewis Cass.

During his brief tenure as president, Taylor surprised many, and established himself as a strong supporter of the union. He refused to take his marching orders from the Whigs in Congress. Debate over the slave status of the large territories claimed in the Mexican War led to threats of secession from Southerners. Despite being a Southerner and a slaveholder himself, Taylor did not support the expansion of slavery. He wanted settlers in New Mexico and California to bypass the territorial stage and draft constitutions for statehood. Debate over the issue led to the Compromise of 1850, something that Taylor did not support. But before the issue could be decided, Taylor died suddenly of a stomach-related illness in July 1850.

On July 4, 1850, Taylor had attended Independence Day celebrations and had eaten cherries and iced milk following a fund-raising event at the Washington Monument, which was then under construction. Over the course of several days, he became severely ill with an unknown digestive ailment. His doctor diagnosed the illness as a form of cholera. Fever followed and Taylor's condition worsened. He died at 10:35 p.m. on July 9, 1850. He was 65 years old.

Taylor was interred in the Public Vault of the Congressional Cemetery in Washington, D.C. from July 13, 1850 to October 25, 1850. His body was transported to the Taylor Family plot where his parents were buried, on the old Taylor homestead plantation known as 'Springfield' in Louisville, Kentucky. In 1883, the Commonwealth of Kentucky placed a fifty-foot monument in his honor near his grave. The cemetery property has since been designated as the Zachary Taylor National Cemetery.

Following his death, rumors began to circulate that Taylor was poisoned by pro-slavery Southerners. In the late 1980s, Clara Rising, a former professor at University of Florida, persuaded Taylor's closest living relative to agree to an exhumation so that his remains could be tested. Taylor's remains were exhumed and transported to the Office of the Kentucky Chief Medical Examiner on June 17, 1991. Samples of hair, fingernail, and other tissues were removed, and radiological studies were conducted. The remains were returned to the cemetery and reinterred. Analysis conducted at Oak Ridge National Laboratory revealed no evidence of poisoning. 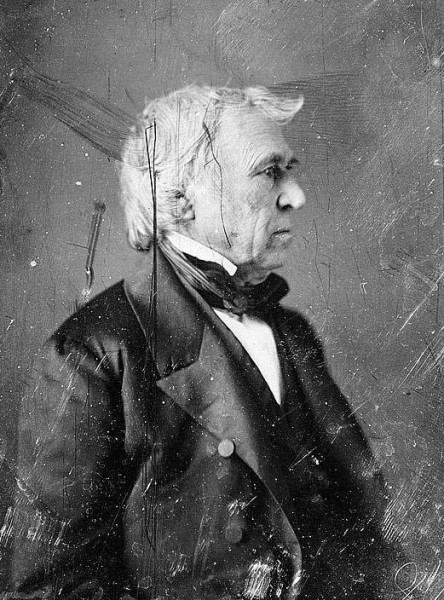 One thing that has always bothered me is that there does not seem to be any sort of presidential museum for Zachary Taylor. This is unfortunate, given his many military accomplishments and his potential to be a great president. I often wonder how secession and the civil war would have unfolded if Taylor had served a full term in office. Would he have vetoed the Compromise of 1850? Would he had confronted secessionists in the same manner as Andrew Jackson had? Would he have accelerated the issue? Would the issues encountered in Kansas during Franklin Pierce's term have happened that much sooner? It makes for interesting historical speculation.
Collapse