Baseball great Ted Williams (born Theodore Samuel Williams) died on July 5, 2002, 19 years ago today. Williams is best remembered for his career on the baseball diamond and for being the last player to have a batting average above .400 in a season (and have over the minimum number of plate appearances required to qualify for a batting title). Williams was also a soldier who served his country in combat, but since this community is about Presidents, we'll also discuss his politics in this article. 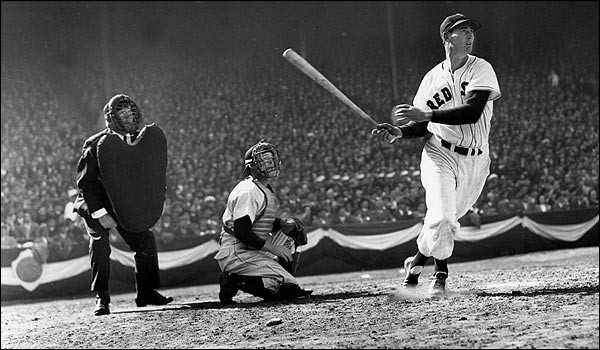 Williams was born on August 30, 1918 in San Diego. He played his entire 19-year Major League Baseball career mostly in left field, which is ironic, since in his politics he was far to the right. Williams played for the Boston Red Sox from 1939 to 1960. His baseball career was interrupted by military service and he served both in World War II and in the Korean War.

Like most baseball players, Williams had several nicknames: "Teddy Ballgame", "The Kid", "The Splendid Splinter", and "The Thumper". He was an all-star 19 times and he won the American League Most Valuable Player Award twice in his career. He won the league batting title six times he was a Triple Crown winner twice. (A Triple Crown winner is someone who leads the league in batting average, home runs and runs batted in.) He finished his playing career with an unbelievable .344 batting average (a mark many players never reach in a season, let along a full career). He hit 521 home runs, and had a .482 on-base percentage, the highest of all time. In 1941, Williams posted a .406 batting average. He is the last MLB player to bat over .400 in a season. He followed this up by winning his first Triple Crown in 1942.

Williams interrupted his baseball career in 1943 to serve three years in the United States Navy and Marine Corps during World War II. This break in his baseball career didn't dull his skills. When he returned to baseball in 1946, Williams won his first AL MVP Award and played in his only World Series. In 1947, he won his second Triple Crown.

Williams was returned to active military duty for portions of the 1952 and 1953 seasons to serve as a Marine combat aviator in the Korean War. On February 16, 1953, Williams, flying as the wingman for future Astronaut and US Senator John Glenn as part of a 35-plane raid against a tank and infantry training school just south of Pyongyang, North Korea. As the aircraft dove on the target, Williams' plane was hit by anti-aircraft fire and a piece of flak knocked out his hydraulics and electrical systems. Williams had to limp his plane back to its air base where he made a belly landing. He was subsequently awarded the Air Medal. Williams flew 39 combat missions in Korea, earning the Air Medal with two Gold Stars, before being withdrawn from flight status in June 1953 because of his hospitalization for pneumonia. This resulted in the discovery of an inner ear infection that disqualified him from flight status. John Glenn called Williams one of the best pilots he knew. 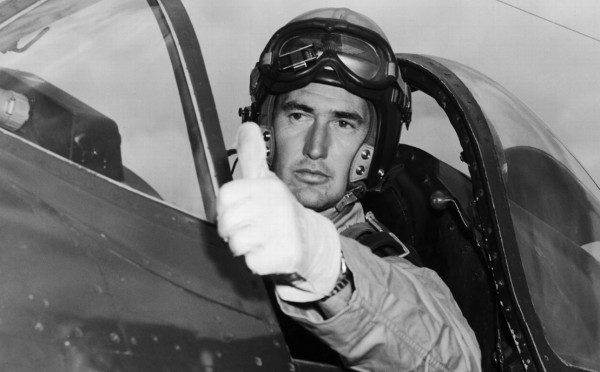 Williams returned to the game after the war and in 1957 and 1958 at the ages of 39 and 40, respectively, he was the AL batting champion for the fifth and sixth time. He retired from playing in 1960 and was inducted into the Baseball Hall of Fame in 1966, his first year of eligibility. Williams went on to manage the Washington Senators (and continued when they became Texas Rangers) from 1969 to 1972.

Williams had a strong admiration for General Douglas MacArthur. He called MacArthur his idol. MacArthur got wind of this and for Williams's 40th birthday, MacArthur sent him an oil painting of himself with the inscription "To Ted Williams – not only America's greatest baseball player, but a great American who served his country. Your friend, Douglas MacArthur. General U.S. Army." MacArthur's sacking by President Harry Truman angered Williams, and cemented his political affiliation with the Republican party. In a PBS documentary about Williams, one biographer describes Williams as, "to the right of Attila the Hun" except when it came to Civil Rights. Williams had a liberal attitude on civil rights. At his Hall of Fame induction speech in 1966, Williams made the case for inclusion of the great Negro League players into the hall. On other cultural issues Williams is described as being “ultraconservative in the tradition of Barry Goldwater and John Wayne”. 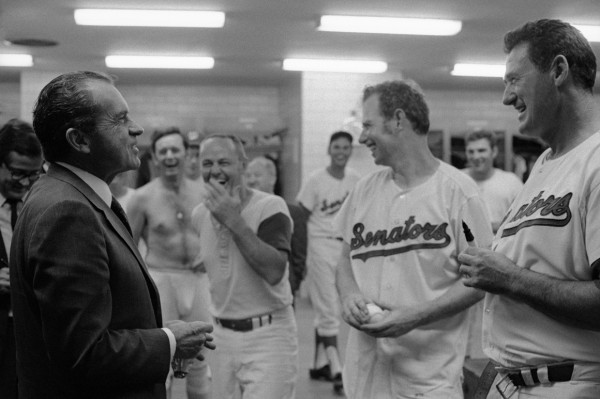 Williams campaigned for Richard Nixon in the 1960 United States Presidential Election. After Nixon lost to John F. Kennedy, Williams refused several invitations from President Kennedy to get together with Kennedy at Cape Cod. He supported Nixon again in 1968. When he was manager of the Senators, Williams kept a picture of Nixon on his desk, and the two met several times while managing the team. In 1972 Williams called Nixon, “the greatest president of my lifetime.”

Williams endorsed several other candidates in Republican Party presidential primaries, including George H.W. Bush in 1988 (whom he also campaigned for in New Hampshire), Bob Dole in 1996, and George W. Bush in 2000. In 1991 President George H. W. Bush presented Williams with the Presidential Medal of Freedom, the highest civilian award bestowed by the United States government.

Williams was selected for the Major League Baseball All-Time Team in 1997 and the Major League Baseball All-Century Team in 1999. In his later years, Williams suffered from cardiomyopathy. He had a pacemaker implanted in November 2000 and underwent open-heart surgery in January 2001. After suffering a series of strokes and congestive heart failure, he died of cardiac arrest at the age of 83 on July 5, 2002, at Citrus Memorial Hospital, Inverness, Florida, near his home in Citrus Hills, Florida. In his will, he expressed his desire to be cremated and his ashes scattered in the Florida Keys. Instead, Williams's son John-Henry and younger daughter Claudia chose to have his remains frozen cryonically.
Collapse