Today is the 176th anniversary of the death of Andrew Jackson, the seventh President of the United States, who died on June 8, 1845. He was a formidable force in his day. Besides being a two term president (from 1829 to 1837), he was also a lawyer, and an army general famous for his defeats of the Creek Indians at the Battle of Horseshoe Bend in 1814 and of the British at the Battle of New Orleans in 1815. He was a polarizing figure, but a dominant one in the world of politics in the first part of the 19th century. 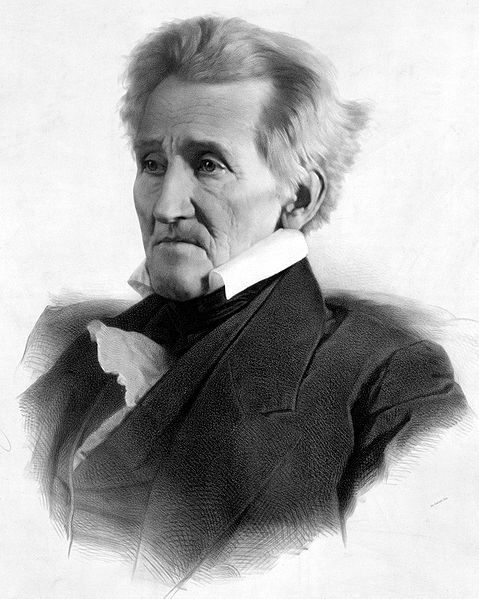 Jackson was born on March 15, 1767. His parents emigrated from Ireland, and his father died in an accident three weeks before Andrew's birth. His exact birthplace is uncertain because he was born when his mother was making a difficult trip home from burying Jackson's father. The area was so remote that the border between North and South Carolina had not yet been surveyed. Both Carolinas lay claim to him. In 1824, Jackson wrote a letter saying that he was born at an uncle's plantation in Lancaster County, South Carolina (but this may have been purely for political purposes because South Carolina was considering nullification of the Tariff of 1824, which Jackson opposed.) Other evidence suggests that he may have been born at a uncle's home in North Carolina. There is no persuasive evidence either way, so far as I can tell.

Jackson was young when the Revolutionary War was fought and he grew up hating the British. At age thirteen, he joined a local militia as a courier. His eldest brother, Hugh, died from heat exhaustion during the Battle of Stono Ferry, on June 20, 1779. Jackson and his brother Robert were captured by the British and held as prisoners. They nearly starved to death in captivity. When Jackson refused to clean the boots of a British officer, the officer slashed at Jackson with a sword, leaving scars on his left hand and head. While imprisoned, both brothers contracted smallpox. Robert Jackson died on April 27, 1781, a few days after their mother Elizabeth secured the brothers' release. After being assured Andrew would recover, Elizabeth Jackson volunteered to nurse prisoners of war on board two ships in Charleston harbor, where there had been an outbreak of cholera. She died from the disease in November 1781, leaving Andrew Jackson an orphan at age 14.

Jackson grew up to become a lawyer. He lived in northeastern Tennessee and was nicknamed Old Hickory because of his toughness and aggressive personality. He fought in duels, and became a wealthy slaveholder. He joined the Tennessee Militia in 1801, eventually rising to the rank of General and gaining fame for his victories in the Battles of Horseshoe Bend and New Orleans.

Jackson ran for President in 1824 and finished first in both popular and electoral vote, but failed to secure a majority of either. The House of Representatives awarded the election to John Quincy Adams, leaving Jackson bitter at both Adams, and Henry Clay, the man Jackson believed made a "corrupt bargain" with Adams to steal the presidency from Jackson. This time he trounced Adams by more than a 2 to 1 margin in the electoral college. The campaign was a bitter one in which insults were hurled not only at Jackson, but at his wife Rachel. When Rachel died after the election but before Jackson's inauguration, it made him even more bitter towards his enemies.

As President, Jackson supported a small and limited federal government. He was a man of the people who hated the notion of an aristocracy. He strengthened the power of the presidency, a position he considered to be the spokesman for the entire population. He was supportive of states' rights, but when some states tried to assert a right to refuse to follow national laws in what was called the Nullification Crisis, he declared that states do not have the right to nullify federal laws, and threatened to personally lead an army against any state that refused to follow the law.

Jackson was strongly against the Second Bank of the United States, and he vetoed the renewal of its charter, which ensured its collapse. He also brought about the Indian Removal Act, which resulted in the forced relocation of thousands of Native Americans from the southwestern United States to territory west of the Mississippi River (now Oklahoma). Historians are mixed in their assessment of his presidency. On the one hand they admire his protection of popular democracy and individual liberty for American citizens, but are highly critical of his support for slavery, his lack of foresight in opposing the bank, and most prominently, his role in Indian removal.

After he left the presidency, Jackson returned to his home in Nashville, known as "the Hermitage." He remained influential in both national and state politics after retiring and remained a firm supporter of the union. He rejected any talk of secession, saying "I will die with the Union." 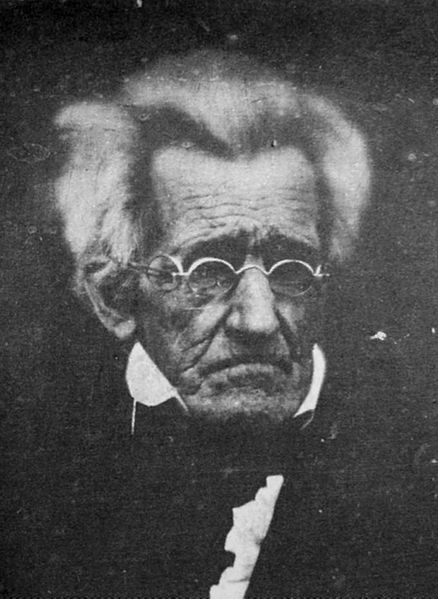 Jackson was in poor health by the time he left the Presidency. He suffered from chronic headaches, abdominal pains, and a hacking cough, caused by a musket ball in his lung that was never removed. He died at The Hermitage on June 8, 1845, at the age of 78, of chronic tuberculosis, dropsy, and heart failure and that's where he is laid to rest. According to a contemporary newspaper account, Jackson "fainted whilst being removed from his chair to the bed, but he subsequently revived... Gen. Jackson died at the Hermitage at 6 o'clock P.M. on Sunday the 8th instance. When the messenger finally came, the old soldier, patriot and Christian was looking out for his approach. He is gone, but his memory lives, and will continue to live."

According to William Henry Harrison's biographer Gail Collins, in 1828 Harrison longed for a more lucrative position than the one he had. He had become a United States Senator from Ohio in March of 1825, but was pestering President John Quincy Adams for something that paid better. In 1828, Adams ran for re-election and Harrison hoped to garner the nomination for Vice-President. He lost that battle to Richard Rush. Both Harrison and Rush were sons of men who had signed the Declaration of Independence. Harrison continued to lobby for a better paying job. 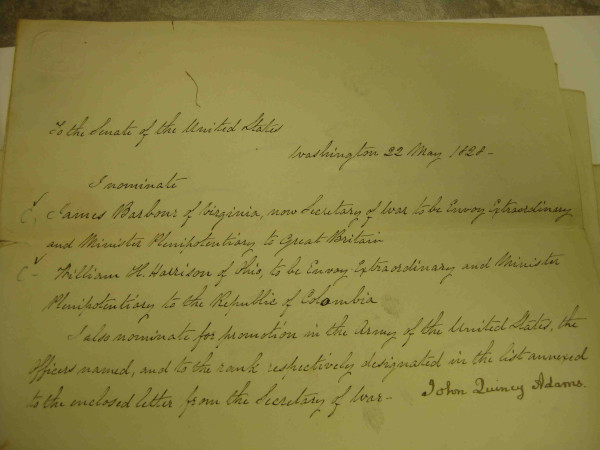 At that time, the position of ambassador was known as Minister Plenipotentiary. They were paid $9000 a year, a pretty good paycheck in those days. Harrison lobbied President Adams for an appointment to one of these positions. His first choice was Mexico, his second was Colombia. At that time, Colombia included present day Venezuela and Ecuador. Adams gave in, though he was aware of how annoying Harrison's quest for a high-paying patronage post was. He wrote in his diary: "Vice-President, Major General, Minister to Colombia, for each of these places he has been this very session as hot in pursuit as a hound on the scent of a hare." Adams called Harrison "a political adventurer" who possessed "a lively and active, but shallow mind."

Harrison had a lot of support in Adams cabinet however, and the President gave in and appointed Harrison to the desired diplomatic post, bound for Colombia. Adams wasn't happy about making the appointment however. He wrote in his diary: "Harrison wants the mission to Colombia much more than it wants him or than it is wanted in the public interest." Harrison himself admitted that he was in need of the money that came with the post. He is described as being "deeply in debt" and one of his grown sons was also in financial trouble.`

At the time in 1828 when Harrison received this appointment, Simon Bolivar was the ruler of Colombia, a man who was hailed by many as being a great liberator of his people. Harrison set off for Colombia, taking his eighteen year-old son Carter along with him as his attaché. It was the first time that Harrison had traveled outside of the country, except for his service in the War of 1812 when he was part of American forces that were involved in the invasion of Canada. It took Harrison over a year to travel to Bogota, Colombia's capitol. He traveled first by sea, and then by land in a trek that included a forty-day journey through the Andes. He arrived in Bogota on December 22, 1828. On the journey some of Harrison's property went missing including fancy dinnerware that he hoped to use to impress his guests. It took six months for mail from home to reach Harrison once he finally did arrive.

Harrison ingratiated himself with the local officials who liked his avuncular manner. Bolivar's foreign minister described the new American minister as "a simple and good man, more of a countryman than a diplomat." Apparently Harrison was also a talented gardener who became famous for the vegetables he grew. These were always in demand any time there was a state dinner. But as Gail Collins writes, "Raising vegetables was the biggest achievement Harrison would have time to accomplish."

In 1828, Andrew Jackson was elected president and was inaugurated on March 4, 1829. Many believed that Jackson would leave Harrison in place as Minister because of their mutual service in the War of 1812. Some of Harrison's old army mates lobbied Jackson to keep Harrison in the post. Postmaster-General William Barry was one of those lobbying his President to leave Harrison at his post. Barry told Jackson, "If you had seen him, as I did, at the Battle of the Thames, you would, I think, let him alone." Jackson replied, "You may be right Barry, I reckon you are, but thank God I didn't see him there." Jackson remembered how, as a young congressman, Harrison had voted in favor of a vote in congress to censure Jackson for having executed two soldiers in 1818 during the Seminole War. Jackson was not one to forgive and forget. Within four days of his administration, he named Harrison's replacement.

It would take another year for Harrison's replacement to arrive. In the meantime, Harrison observed that the American-style revolution that Bolivar once promised was becoming more and more dictatorial. Harrison reported as much back to Washington. Years later, there was speculation that Harrison received much of his information from those who were plotting to overthrow Bolivar. But he was not discreet about his criticism of Bolivar, he was open about his disapproval of Bolivar's leadership style. He wrote to the Colombian leader: "Are you willing that your name should descend to posterity among the mass of those whose fame has been derived from shedding human blood without a single advantage to the human race? Or shall it be united with that of Washington as the father and the founder of a great and happy people?" He told Bolivar that "the strongest of governments is that which is most free". Bolivar wrote back, "The United States seem destined by Providence to plague America with torments in the name of freedom". The Colombian government began to prepare charges against Harrison and his son that they were plotting with insurrectionists. This only served to hasten Harrison's exit from the country. 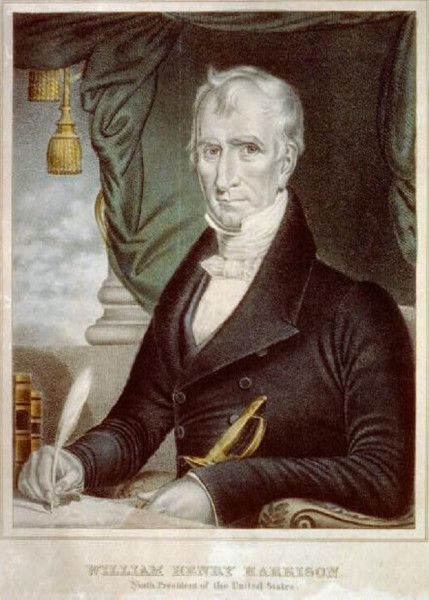 Harrison received news of his recall and traveled to the port of Cartegena for his trip home. He was stranded in the city for four weeks attempting to secure passage home. A New York merchant named Silas Burrows came to Harrison's rescue, providing passage home on his ship. Harrison was very grateful, and in 1841 Burrows was an honored guest at Harrison's inauguration as President.

Gail Collins writes: "Harrison returned home to Ohio after a nineteen month absence with nothing to show for his South American sojourn but a working knowledge of Spanish, a pet Macaw, and a need for cash."
Collapse