The year 1876 marked the 100th anniversary of the Declaration of Independence. The Centennial International Exhibition of 1876 was the first official World's Fair to be held in the United States, and it was held from May 10 to November 10, in Philadelphia, Pennsylvania, the city where the Declaration had been signed. When he spoke at the Fair, President Ulysses Grant drew cheers at the opening ceremonies, but like most two term presidents at the end of their run, Grant was no longer as popular as he had once been. The many scandals of his presidency, the country's weak economy, and the Democratic gains in the House had chipped away at Grant's popularity both among Republicans and among voters generally. By the time the party met in June to select its presidential candidate, Grand had read the writing on the wall and knew that he did not have the support of his party to run run for a third term. Grant declined to run for president in 1876, and the convention chose Ohio Governor Rutherford B. Hayes, a reformer, as its standard bearer. The Democrats nominated Governor Samuel J. Tilden of New York. 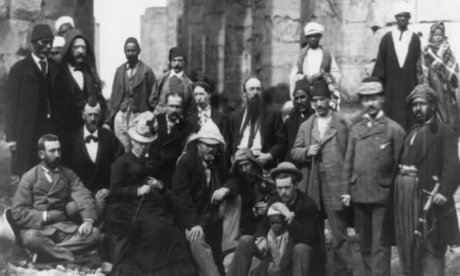 The election was the most controversial in history, with voting irregularities in three Southern states making it unclear who the winner was for several months. The election was ultimately awarded to Hayes in a process that many viewed as fraudulent. Grant received a report that Democrats in the South were threatening violence and if Hayes won, Grant would be assassinated. Grant told Congress that he would not use the army, except to curb violence. Republicans agreed to the Compromise of 1877, in which the last troops were withdrawn from Southern capitals. The Republicans had won, but Reconstruction was over.

After leaving the White House, Grant and his family stayed at the home of his Secretary of State, Hamilton Fish, in New York for two months before setting out on a world tour. Grant had wanted to see the world and was now able to do so. Preparing for the tour, he and his wife Julia arrived in Philadelphia on May 10, 1877, where they were honored with celebrations during the week before their departure.

On May 16, Grant and Julia left for England aboard the SS Indiana. President Hayes decided to take advantage of of Grant's popularity in Europe, and he encouraged Grant to extend his tour and voyage around the world to strengthen American interests abroad. The first stop of Grant's journey was in Liverpool in May, where he was greeted by enormous crowds. Grant was hailed as the "Hero of Appomattox" and as the Union general who defeated the Confederacy. The Grants dined with Queen Victoria at Windsor Castle. Grant gave several speeches in London.

Grant visited a number of countries on the continent, before returning to Great Britain to visit Scotland. There the Grants spent time with their daughter Nellie in Southhampton, who during Grant's presidency had married an Englishman, Algernon Sartoris, in a White House ceremony.

Grant and Julia next traveled to Paris and visited with Léon Gambetta, a prominent French statesman who would become President of France in 1879. Grant considered Gambetta to be one of the greatest people he met on the tour. Next the Grants went for Italy, visiting Naples, Pompeii and Mount Vesuvius. The Grants spent Christmas 1877 aboard USS Vandalia, a warship docked in Palermo. After cruising the Mediterranean, the Grants took a winter trip through Egypt and the Holy Land. They were in Constantinople on March 3, 1878 and at the time of the signing of the Treaty of San Stefano. Next, they went to Greece, and then to the Vatican where they met with Pope Leo XIII at the Vatican.

In the new year of 1878, the Grants visited the Netherlands before going on to Germany. In Berlin, Grant discussed military matters with Chancellor Otto von Bismarck, telling him that in the final stages of the Civil War, the Union Army fought to preserve the nation and to "destroy slavery". The Grants traveled to Russia, where Czar Alexander II asked Grant about the future of the Plains Indians. After touring Spain, the Grants returned to England, stopping first in Paris. From England, the Grants left by private ship, sailing into the Mediterranean and stopping at Marseilles, then across to Alexandria visiting Egypt before sailing through the Suez Canal to India.

Grant did not think much of British colonization of India, seeing little benefit for the Indian people. He later conceded that the colonial subjects did experience an improved economic condition. After India, they toured Burma (Myanmar), and Siam (Thailand), where Grant met with King Chulalongkorn. They next traveled to Singapore, and Cochinchina (Vietnam). After that it was on to Hong Kong, Canton, Shanghai, and Peking (Beijing). At the latter stop, Grant was critical of the autocratic attitude of Westerners toward the Chinese, which he compared to that of antebellum slaveowners. He chose not to request an interview with the Guangxu Emperor, a child of seven, but did speak with the head of government, Prince Gong, and Li Hongzhang (shown in the photo below). Like Grant, Li was a leading general in his country. They discussed China's dispute with Japan over the Ryukyu Islands, and Grant agreed to serve as a mediator.

After crossing over to Japan on the USS Richmond and meeting the Emperor Meiji, Grant, keeping his word, tried unsuccessfully to mediate Japan to make peace with the Chinese. But Japan knew that they had the superior military, and they annexed the disputed islands a few weeks after Grant left their country.

Japan was the final stop on the Grants' world tour. They left Japan sailing on the City of Tokio escorted by a Japanese man-of-war, and crossed the Pacific and landed in San Francisco in September 1879, where they were greeted by cheering crowds. After a visit to Yosemite Valley, they arrived back home in Philadelphia on December 16, 1879. 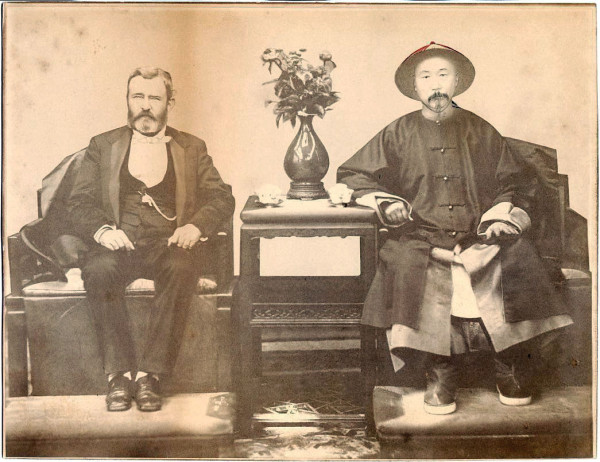 Their voyage had lasted two years and seven months. It enhanced Grant's reputation and served to rehabilitate his sagging popularity. One group that took notice of this was the Stalwart faction of the Republican party. Stalwarts had been excluded from much of the power and patronage doled out by the Hayes administration. Stalwarts such as Senator Roscoe Conkling of New York now saw Grant in a new light. The Republican nomination for 1880 was wide open after Hayes pledged not to seek a second term and many Republicans thought that Grant was the man for the job.

Ultimately, Grant would not be win his party's nomination in 1880. His later life would continue to be eventful, with financial reversals, victimization by a swindler, noble efforts to pay off his creditors, and a race against the clock to write the memoirs that would provide financial security for his family before succumbing to the throat cancer that would take his life in 1885.
Collapse