Was it his background as an actor that made President Ronald Reagan turn his mind to the potential of an attack from outer space? Or did he know something that the rest of the world didn't? Probably the former. But on a number of occasions, President Reagan referenced the possibility of an alien invasion, usually as a pretext for illustrating the need for cooperation among nations rather than competition at a time when the Cold War was reaching its climax. 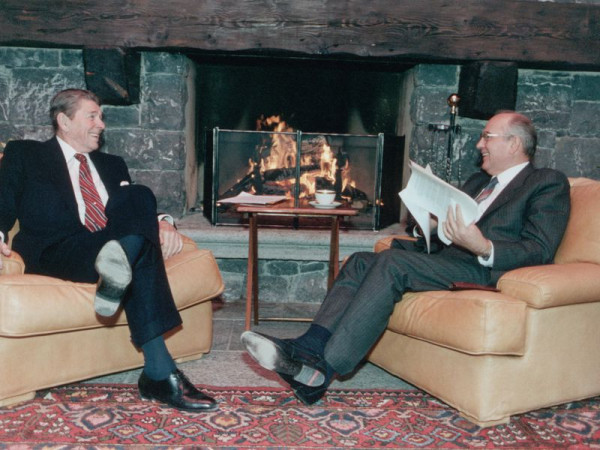 In 1985, Reagan and Soviet Premier Mikhail Gorbachev met for their famous Geneva Summit, called to discuss diplomatic relations between the two great world powers and the arms race that was escalating between the two nations. At one point during the meeting the two world leaders took a break from negotiations and went for a walk together. Only their private interpreters were present. For many years, the details of what they talked about were kept secret from the public and the media. It wasn't until a 2009 interview that CBS newsman Charlie Rose had with Gorbachev and Reagan’s Secretary of State George Shultz, that Gorbachev revealed how Reagan had turned the conversation to the subject of what would happen if the world was ever invaded by aliens.

The meeting was held at a chateau known as the Maison de Saussure. Gorbachev said of the meeting, "We viewed the Geneva meeting realistically, without grand expectations, yet we hoped to lay the foundations for a serious dialogue in the future." Borrowing on the example of President Dwight Eisenhower, Reagan believed that a personal relationship among leaders was the necessary first step to breaking down the barriers of tension that existed between the two countries. His goal was to convince Gorbachev that America desired peace and had no desire for world domination. Reagan opened the summit by telling Gorbachev "The United States and the Soviet Union are the two greatest countries on Earth, the superpowers. They are the only ones who can start World War Three, but also the only two countries that could bring peace to the world". He then discussed the personal similarities between the two leaders, with both being born in similar "rural hamlets in the middle of their respective countries" and the great responsibilities they held. Their first meeting exceeded their time limit by over a half an hour. Gorbachev argued that the United States did not trust them and that its ruling class was trying to keep the people uneasy. Ronald Reagan responded by saying that the Soviets had been acting aggressively and suggested the Soviets were overly paranoid about the United States. They then broke for lunch.

The two men talked outside for about two hours and one of the subjects they discussed was the Strategic Defense Initiative, which became colloquially known as "Star Wars." The next session started with arguments about the arms race, then went into SDI, following which the two leaders agreed to a joint statement.

In his interview with Rose, Gorbachev mentioned how Reagan brought up the subject of a possible alien invasion. After Shultz mentioned how the two leaders ducked out of a meeting to take a walk to a nearby cabin, Gorbachev related some of the conversation the two men had in the cabin. He told Rose: "From the fireside house, President Reagan suddenly said to me, 'What would you do if the United States were suddenly attacked by someone from outer space? Would you help us?' I said, 'No doubt about it.' He said, 'We too.'So that's interesting."

This would not be Reagan's last allusion to a possible alien invasion. On Sept. 21, 1987, Reagan gave an address to the United Nations General Assembly. In a frequently quoted section of his speech, Reagan commented about the nations and cultures of the world uniting in common efforts to live in peace and avoid wars and bloodshed. He told the assembly: “Cannot swords be turned to plowshares? Can we and all nations not live in peace? In our obsession with antagonisms of the moment, we often forget how much unites all the members of humanity." It was then that he brought up the subject of a possible attack from outer space. He said:

“Perhaps we need some outside, universal threat to make us recognize this common bond. I occasionally think how quickly our differences worldwide would vanish if we were facing an alien threat from outside this world. And yet, I ask you, is not an alien force already among us? What could be more alien to the universal aspirations of our peoples than war and the threat of war?”

Reagan called on his audience to take the long view instead of “our obsession with antagonisms of the moment.” He imagined that the many sources of discord and conflict among nations “would vanish if we were facing an alien threat from outside this world.” In keeping with his optimistic view of humanity, he imagined that the human race would pull together in greater unity in the face of a larger danger and tried to make the case that a greater awareness about what humanity has in common would mankind overcome the past pattern of wars and destruction that has permeated the history of the human race. 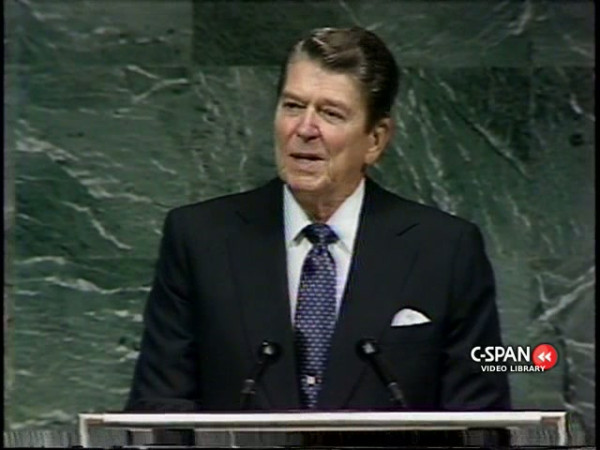 But Reagan's reference to aliens may have been more than simply the product of an imaginative actor's mind. One night in 1974, Reagan himself may have seen a UFO while Governor of California. He was one of four persons on board a Cessna Citation aircraft, along with his pilot Bill Paynter, and two security guards. As the airplane approached Bakersfield, California, the passengers called Paynter's attention to a strange object to their rear. Paynter described it as follows:

"It appeared to be several hundred yards away. It was a fairly steady light until it began to accelerate. Then it appeared to elongate. Then the light took off. It went up at a 45-degree angle-at a high rate of speed. Everyone on the plane was surprised. The UFO went from a normal cruise speed to a fantastic speed instantly. If you give an airplane power, it will accelerate-but not like a hot rod, and that's what this was like."

The following week Reagan described the sighting to Norman C. Miller, then Washington bureau chief for the Wall Street Journal. Reagan told Miller, "We followed it for several minutes. It was a bright white light. We followed it to Bakersfield, and all of a sudden to our utter amazement it went straight up into the heavens." Miller expressed some doubt, and according to Miller, "a look of horror came over him [Reagan]. It suddenly dawned on him that he was talking to a reporter." Immediately afterward, in Miller's words, Reagan "clammed up."
Collapse