Actor Jackie Gleason was perhaps best known for his role as bus driver Ralph Kramden, whose famous catch-phrase was "To the moon Alice!" It was a different time, when remarks about spousal violence were followed by a laugh track. Gleason had much more of an interest in the heavens besides his punch line. The actor was said to be was greatly interested in the possibility of extra-terrestrials, as well as the paranormal, He read many books on UFOs and other subjects and even commissioned a house in Peekskill, New York that was built to resemble a flying saucer, During the 1950s, he was a recurring guest on a paranormal-themed overnight radio show hosted by John Nebel, and after his death, his large book collection was donated to the library of the University of Miami. 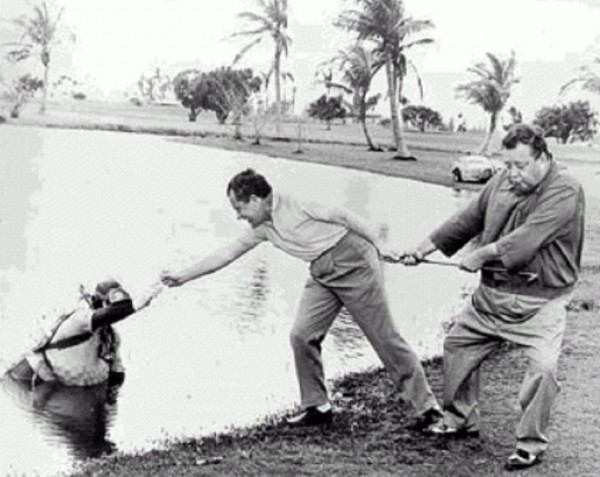 Gleason met his second wife, Beverly McKittrick, at a country club in 1968, where she worked as a secretary. The two were married in a registry ceremony in Ashford, England on July 4, 1970. The marriage lasted only four years and in September 1974, Gleason filed for divorce from McKittrick. She contested the divorce, asking for a reconciliation, but the divorce was granted on November 19, 1975.

In 1983, McKittrick gave an interview to the notoriously unreliable National Inquirer, in which she claimed that on February 19, 1973, Nixon took Gleason to an air force base, after the two had played golf together, to show Gleason what he was told were the remains of extra terrestrials. McKittrick was not present for the event, but claimed that Gleason had recounted the details of the event to her. According to McKittick, Gleason and Nixon had played a round of golf the day after which the two spent some time chatting about Gleason's interest in UFO's. The two men had developed a friendship. Gleason had been a staunch supporter of the Nixon campaign.

McKittrick says that sometime around midnight, Nixon suddenly showed up at midnight at Gleason's front door in Key Biscayne. She claims that he appeared alone, without his Secret Service, a detail that makes the story considerably less credible. But as the story goes, Nixon and Gleason drove through the night to Homestead Air Force Base, 35 miles southwest of Miami. After entering the base, Nixon drove to a heavily-guarded building at the far end of the compound where the two men were allowed into the facility. According to McKittrick, Gleason told her:

"There were a number of labs we passed through first before we entered a section where Nixon pointed out what he said was the wreckage from a flying saucer, enclosed in several large cases. Next, we went into an inner chamber and there were six or eight of what looked like glass-topped Coke freezers. Inside them were the mangled remains of what I took to be children."

McKittrick described the incident to the Inquirer as follows:

I’ll never forget the night in 1973 my famous husband came home, slumped white-faced in an armchair and spilled out the incredible story to me. He was late. It was around 11:30 p.m. and I’d been worried. As soon as I heard his key turn in the lock of our golf course home in Inverary, Florida. I jumped to my feet and asked, “Where have you been?”

His reply stunned me: “I’ve been at Homestead Air Force Base — and I’ve seen the bodies of some aliens from outer space. It’s top secret. Only a few people know. But the President arranged for me to be escorted in there and see them.”

Gleason went to to tell her: "And there were the aliens, lying on four separate tables. They were tiny — only about two feet tall — with small bald heads and disproportionately large years. They must have been dead for some time because they’d been embalmed.”

According to Gleason (according to McKittrick), Nixon told Gleason that these were actually the remains of deceased aliens. She said that seeing this shook Gleason to the core, and he had difficulty sleeping for several weeks. When he returned home, he told his wife about what he had seen and swore her to secrecy. The couple were already in the process of separating and Beverly was also in the process of writing a book about her relationship with the mercurial and hard-drinking funnyman.

When the Enquirer story came out, Gleason kept silent about the allegation until 1986. At that time, he invited Larry Warren, a ufologist and the author and eye-witness to the Rendlesham Forest UFO Incident. The two men met at Gleason's New York home. According to Warren, after a few drinks, Gleason repeated the story to him.

Gleason died a year later in 1987. Supposedly, the only persons he told about the incident were McKittrick and Warren. But there is good reason to believe that the story is completely made up. According to Nixon's daily diary (available on the Nixon Library website), Nixon was in Key Biscayne on February 19, 1973, but the main item on his agenda was a meeting with the AFL-CIO. He did attend Gleason's annual golf tournament at the Inverrary Golf and Country Club, spending only 40 minutes there. 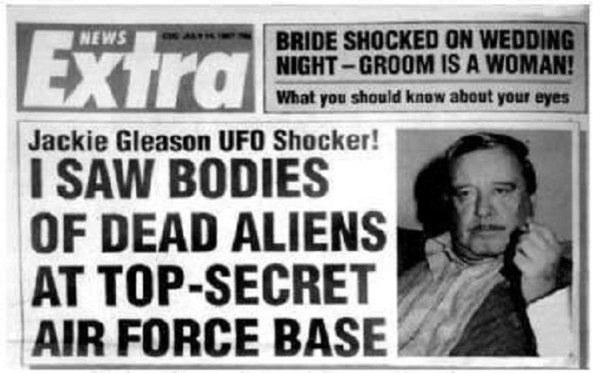 The Enquirer article was said to be an excerpt of Beverly's "bombshell book", a book that was never written. Writer Mike Rothschild sums up the incident best in his Skeptoid blog when he writes:

From what I can tell, there are four possibilities for the origin of this strange story:

I have no idea which one of those is true. But I'm pretty sure I know which one isn't.
Collapse