While still serving as Vice-President of the United States in 1801, Thomas Jefferson received a letter from William Dunbar, a resident of Natchez, Louisiana. The letter was sent to Jefferson in his capacity as President of the American Philosophical Society, an organization founded by Benjamin Franklin. The Philosophical Society, as it was originally named, was founded in 1743 by Franklin, James Alexander, Francis Hopkinson, John Bartram, Philip Syng, Jr. and others. Early members included George Washington, John Adams, Jefferson, Alexander Hamilton, James McHenry, Thomas Paine, Nicholas Biddle, Benjamin Rush, and James Madison.

The letter was published in an issue of the society's newsletter entitled Transactions of the American Philosophical Society on page 25 of Volume 6. Dunbar was a member of the society and was also a diligent investigator of natural phenomena in the lower Louisiana region, which at the time was still Spanish territory. Dunbar studied rainfall, winds, rainbows, fossils, the Mississippi delta and even sign language among the native peoples in the area. 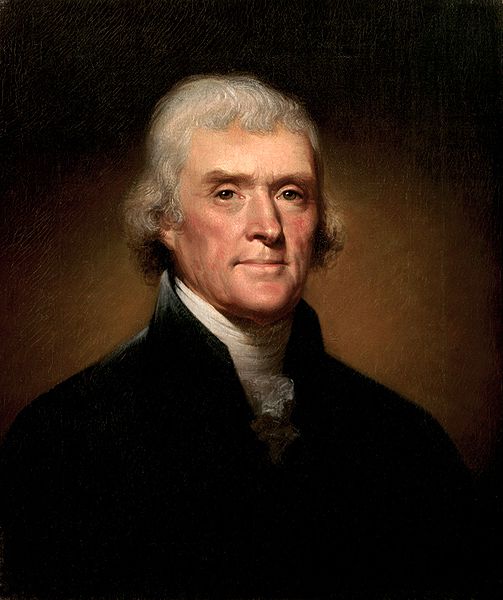 At the time this note was read, scientists were debating the existence of meteorites. It was not until 1803 when Jean-Baptiste Biot reported the fall of a meteor near the Norman town of L'Aigle that the general scientific community finally began to accept the existence of such objects.

But it is believed that what Dunbar describes, if accurate, what not a meteorite. The object's size if anywhere near accurate, could not have been a meteorite because an object of this size, entering earth's atmosphere at a speed typical of objects falling to earth from space, would have left a much larger trace of itself. For example, scientists estimate the size of the iron meteor that created Arizona's Meteor Crater, at roughly 50 meters.

A phenomenon was seen to pass Baton Rouge on the night of the 5th April 1800, of which the following is the best description I have been able to obtain.

It was first seen in the South West, and moved so rapidly, passing over the heads of the spectators, as to disappear in the North East in about a quarter of a minute.

It appeared to be of the size of a large house, 70 or 80 feet long and of a form nearly resembling Fig. 5 in Plate IV.b

It appeared to be about 200 yards above the surface of the earth, wholly luminous, but not emitting sparks; of a colour resembling the sun near the horizon in a cold frosty evening, which may be called a crimson red. When passing right over the heads of the spectators, the light on the surface of the earth, was little short of the effect of sun-beams, though at the same time, looking another way, the stars were visible, which appears to be a confirmation of the opinion formed of its moderate elevation. In passing, a considerable degree of heat was felt but no electric sensation. Immediately after it disappeared in the North East, a violent rushing noise was heard, as if the phenomenon was bearing down the forest before it, and in a few seconds a tremendous crash was heard similar to that of the largest piece of ordnance, causing a very sensible earthquake.

I have been informed, that search has been made in the place where the burning body fell, and that a considerable portion of the surface of the earth was found broken up, and every vegetable body burned or greatly scorched. I have not yet received answers to a number of queries I have sent on, which may perhaps bring to light more particulars.

Unfortunately, the diagram referred to as Figure 5, a one page document, is missing the plate page containing the drawing. Dunbar had been a friend of Jefferson's. Dunbar died in 1810. Six years earlier in 1804 President Jefferson asked Dunbar and George Hunter to lead an expedition to trace the Arkansas and Red Rivers to their sources. The president wanted to know as much as he could about his recent Louisiana Purchase. After hearing reports about a violent group of Osage Indians stationed along their planned route, Dunbar and Hunter were forced to scale back their planned expedition. The two men explored the Ouachita River.

Thirteen years later, on July 31, 1813, Jefferson received another report of what might have been a UFO, from a tavern keeper named Edward Hansford, and from John Clarke, a visitor from Baltimore, describing what they claim to have seen in the sky above Portsmouth, Virigina. In their letter, they described seeing a fireball that seemed to change shape and take the form of animals. Here is the text of their letter, which is archived at Jefferson's home and present day museum at Monticello:

We the subscribers most earnestly solicit, that your honor will give us your opinion, on the following extraordinary Phenomenon Viz:

At (blank) hour on the night of the 25th instant, we saw in the South a Ball of fire full as large as the sun at Maridian which was frequently obscured within the space of ten minutes by a smoke emitted from its own body, but ultimately retained its briliancy, and form1 during that period, but with apparent agitation. It then assumed the form of a Turtle which also appeared to be much agitated and as frequently obscured by a similar smoke. It descended obliquely to the West, and raised again perpendicular to its original hight which was on or about 75 degrees. It then assumed the shape of a human skeleton which was frequently obscured by a like smoke and as frequently descended and ascended—It then assumed the form of a Scotch Highlander arrayed for battle and extremely agitated, and ultimately passed to the West and disappeared2 in its own smoke. we are honorable

Edward Hansford, Keeper of the Washington Tavern in the Town of Portsmouth Virginia— 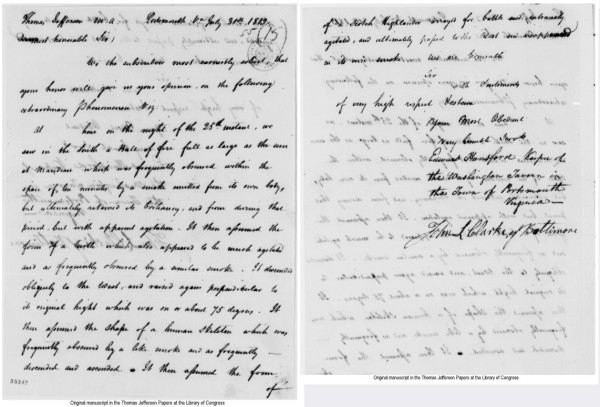 There is no record of Jefferson responding to this letter. By all indications, Jefferson kept an open mind about what might have been up in the skies. In an 1822 letter, he wrote:

"Of all the departments of science no one seems to have been less advanced for the last hundred years than that of meteorology…the phenomena of snow, hail, halo, Aurora Borealis, haze, looming, etc. are as yet very imperfectly understood. I am myself an empiric in natural philosophy, suffering my faith to go no further than my facts. I am pleased however to see the efforts of hypothetical speculation because by the collisions of different hypotheses truth may be elicited and science advanced in the end."

On April 4, 1841 (180 years ago today) William Henry Harrison became the first president to die in office. His death came only a month after his inauguration, raising a number of questions about succession upon the death of a president, and leading to the setting of precedent thereafter. 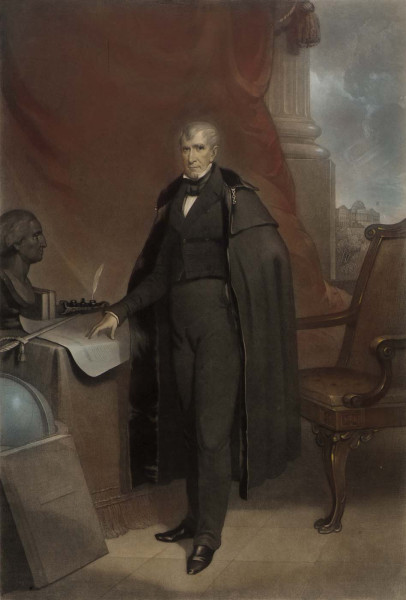 Harrison, the ninth President of the United States, had been a military officer, territorial and governor before being elected as the Whig Party's first successful presidential candidate in the election of 1840. He was also the grandfather of Benjamin Harrison, who became the 23rd President of the United States. He was 68 years, 23 days old when inaugurated, the oldest president to take office up to that time, a record that would last until the inauguration of Ronald Reagan in 1981, and later be surpassed by the 45th and 46th Presidents. Harrison died on his 32nd day in office of complications from pneumonia. His tenure is the shortest in United States presidential history. His death sparked a brief constitutional crisis, but its resolution settled many questions about presidential succession left unanswered by the Constitution until the passage of the 25th Amendment.

William Henry Harrison was born on February 9, 1773. He was the youngest of seven children born to Benjamin Harrison V and the former Elizabeth Bassett. Harrison was born on his family's Berkeley Plantation in Charles City County, Virginia, coincidentally the same county where his future running mate John Tyler was born. Harrison was the last president born as a British subject before American Independence. His father was a delegate to the Continental Congress from 1774 to 1777 and a signer of the Declaration of Independence, as well as governor of Virginia from 1781 to 1784, during and after the American Revolutionary War. William's older brother, Carter Bassett Harrison, was elected to the United States House of Representatives from Virginia.

Before election as president, Harrison had served as the first territorial congressional delegate from the Northwest Territory, governor of the Indiana Territory and later as a U.S. representative and senator from Ohio. He gained national fame for leading U.S. forces against Native Americans led by Tecumseh at the Battle of Tippecanoe in 1811, from which he acquired the nickname "Old Tippecanoe". He served as a general in the War of 1812, and commanded US forces in the Battle of the Thames in 1813, which brought an end to hostilities in his region.

After the war, Harrison moved to Ohio, where he was elected to the United States House of Representatives. In 1824 the state legislature elected him to the US Senate. He served as Minister Plenipotentiary (ambassador) to Colombia in May 1828, a job for which he was hired by John Quincy Adams and fired by Andrew Jackson. After that he returned to his farm in Ohio, and remained politically inactive until 1833 when he was nominated for the presidency as one of three Whig candidates running against Marin Van Buren. Harrison finished second in the election and retired again to his farm, only to be selected at the Whig candidate in 1840. This time he was elected president, an office he held for a month.

On March 26, Harrison became ill with a cold. There is a popular misconception that his illness came about because at his inauguration he gave a long inaugural address in cold weather, without an overcoat. But Harrison's illness did not arise until more than three weeks later. His cold turned into to pneumonia and pleurisy and he had difficulty in getting any rest in the White House, because of the steady crowd of office seekers. Harrison's doctors tried applying so-called "cures" such as opium, castor oil, leeches, and Virginia snakeweed. The treatments only made Harrison worse, and he became delirious. He died nine days after becoming ill, at 12:30 a.m. on April 4, 1841, of pneumonia, jaundice, and septicemia. Many believe that his last words, which were spoken to his doctor, were really meant for his successor John Tyler. Harrison is reported to have said: "Sir, I wish you to understand the true principles of the government. I wish them carried out. I ask nothing more." He then checked out. 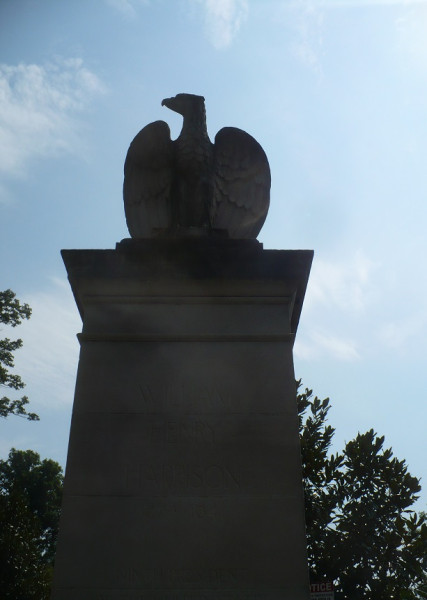 Harrison is buried in West Bend, Ohio, about 30 miles west of Cincinnati. I visited Harrison's Tomb when I was in the area in August of 2013. His resting place overlooks a scenic part of the Ohio River, and there is a museum style display in the park adjacent to the monument housing the tomb. It is a nice remembrance of the man in a blissful setting.
Collapse