In February of 1954, President Dwight Eisenhower took a trip to Palm Springs, California, for what was officially said to be a winter holiday. The President's whereabouts on the night of Saturday, February 20, 1954, are unknown, prompting speculation as to just what the Eisenhower was up to. A number of "alien theorists" (such as Michael Salla, a former American University professor who now runs the Peace Ambassador Program at AU's Center for Global Peace) have speculated that Eisenhower's absence was kept secret because at the time he was holding a secret meeting with emissaries from another planet. The meeting was alleged to have been held at nearby Edwards Air Force Base. William Moore, described as "a prominent California researcher", traveled to the Eisenhower Library in Abilene, Kansas,to research the theory and interview the wife of a man who claimed to have witnessed the meeting. 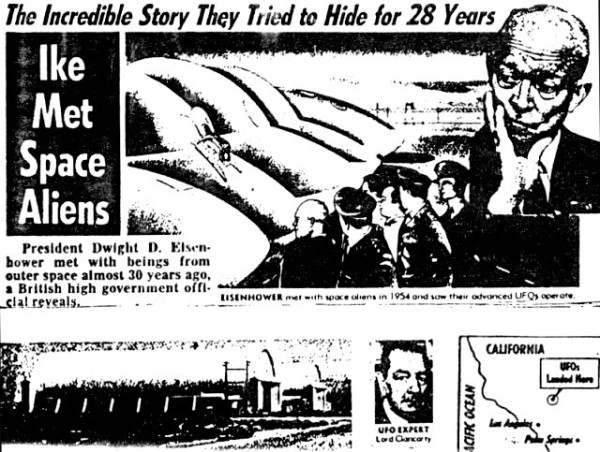 In an article written by Moore on March 29, 1989, he opened his article by noting the observation of noted astronomer Dr. Carl Sagan, who believed that UFOs "are more a matter for religion and superstition than they are for science." With that caveat, Moore acknowledged the existence of a rumored story that President Eisenhower visited Edwards Air Force Base in February of 1954, and either viewed the bodies of dead aliens and the wreckage of their craft, or that he actually met with live aliens on some sort of diplomatic mission to earth. The the common thread to all of these stories was Eisenhower's mysterious disappearance on that Saturday evening while on a vacation to Palm Springs. According to Moore's research, Eisenhower returned by dawn the next morning and shortly thereafter ordered absolute secrecy about anything having to do with UFOs.

Delving into these rumors further, Moore was able to verify that Eisenhower did indeed make a trip to Palm Springs between February 17th and 24th, 1954, and on the evening of Saturday, February 20th, he did disappear. When members of the media learned that the president was AWOL, rumors began to spread that he had either died or was seriously ill. When these rumors threatened to make their way into the newspapers, White House Press Secretary James Haggerty called an urgent late evening press conference to announce "solemnly" that the president had been enjoying fried chicken earlier that evening, had knocked a cap off a tooth, and had been taken to a local dentist for treatment. The Associated Press had already sent a report out onto the newswires that "President Eisenhower died tonight of a heart attack in Palm Springs." Two minutes later, the AP retracted that bulletin and reported that Eisenhower was still alive. Eisenhower turned up as scheduled the next morning for an early church service, and that seemed to end the matter.

In June of 1979, Moore spoke to the the dentist's widow. One might expect that for a local dentist, having the President of the United States as a patient would be an unforgettable experience, but this woman was curiously unable to recall any specifics relating to her husband's alleged involvement in the affair. She was however easily able to recall the details of her and her husband's attendance (by presidential invitation) at a steak fry the following evening, where her husband was introduced as "the dentist who had treated the president". This inconsistency led Moore to conclude that the dental story was a ruse intended to be used as a cover for whatever it was that Eisenhower was actually up to that evening. His research at the Eisenhower Library also uncovered two other facts inconsistent with the dentist story.

The first is that while the library maintains an extensive index of records relating to the president's health, there is no record of any dental work having been performed at all during February, 1954. A file on "Dentists" contains nothing concerning any such incident. Secondly, there is a large file containing copies of all sorts of acknowledgments which were sent by the White House to people who had something to do with the Palm Springs trip. These include letters to people who sent flowers, people who met the airplane, people who had offered to play golf, and even a thank you letter to the minister who presided over the church service Ike attended. Conspicuously absent is any acknowledgment having been sent to "the dentist who treated the president."

So what was Eisenhower really doing that Saturday night? Two months later, a man named Gerald Light wrote a letter to the head of a Southern California metaphysical organization, in which he claimed to have been at Edwards Air Force Base that evening, where he saw Eisenhower. He also claimed that he saw an alien spacecraft and the aliens themselves. Light is described as "an elderly mystic who believed that psychic out-of-body-experiences were a logical extension of the reality of life and should be treated as such."

Professor Salla, who has a PhD in government from the University of Queensland in his native Australia, also supports the theory that Eisenhower went to Edwards Air Force Base, where he met with two extraterrestrials. The two are described as having white hair, pale blue eyes and colorless lips. According to Dr. Salla, these aliens are known as "Nordics" in UFO circles because they resemble Scandinavian humans. Salla claims that they traveled to Edwards from another solar system in an interstellar spacecraft and met with Eisenhower on that Saturday night. He claims that he Nordics communicated telepathically and that they offered to share their superior technology and their spiritual wisdom with Eisenhower if he would agree to eliminate America's nuclear weapons. According to Salla, "They were afraid we might blow up some of our nuclear technology, and apparently that does something to time and space and it impacts on extraterrestrial races on other planets." But Salla says that Eisenhower rejected the offer because he believed that American control of nuclear weapons was the real key to maintaining world peace.

According to Salla, this wasn't the last time Eisenhower met with alien visitors. He claims that sometime later in 1954, Ike reached a deal with another race of extraterrestrials, known as the "Greys". Under the terms of this "treaty". the Greys would be allowed to capture cattle and humans for medical experiments, provided that they returned the humans safely home and otherwise kept the peace with we earthlings. Salla says that since brokering the deal, the "Greys" have kidnapped "millions" of humans and he presents this as the explanation for such phenomena as cattle mutilations, alien abductions and crop circles.

Unsurprisingly, those at the Eisenhower Library deny that any such meetings ever took place. Jim Leyerzapf, an archivist at the Eisenhower Library, told the Washington Post, "There's nothing in the archives that indicates that" before bursting into laughter. He added, "We've had so many requests on that subject that we have a person who specializes in this." That person is archivist Herb Pankratz.

Pankratz add, "It's interesting how these stories have changed. Initially, the accounts claimed the President made a secret trip to Edwards Air Force Base to view the remains of aliens who had crashed at Roswell, New Mexico, in 1947. Later stories then claimed he had actually visited with live aliens." He adds, "The lack of a dental record from Dr. Purcell's office has helped fuel belief in this UFO encounter."

As to why the AP reported that Eisenhower had died that night, Pankratz says, "Somebody was fooling around and it went out. It wasn't supposed to go out but it did."

Dr. Salla's theories are contained in his new book, "Exopolitics: Political Implications of the Extraterrestrial Presence" and in an article on his "Exopolitics" Web site (www.exopolitics.org). Coincidentally, Dr. Salla is speaking at a conference in August of this year in Ventura Beach called "Dimensions on Disclosure". One of the other speakers at that conference is Laura Eisenhower, the great-granddaughter of President Dwight Eisenhower. According to her conference bio she will "reveal Exopolitical information" about her grandfather's administration, "that has been largely held in secrecy."
Collapse