Sherwood Forest Plantation was the home of President John Tyler from 1842 until his death in 1862. Since then, it has been the continuous residence of the Tyler family since its purchase by the first "Accidental President" and it is said to be the longest frame house in America, at is over 300 feet long. The plantation was first recorded in a 1616 land grant. It was originally known as Smith's Hundred. The house was believed to have been built around 1720. It is described as "a classic example of Virginia Tidewater design: big house, little house, colonnade, and kitchen." 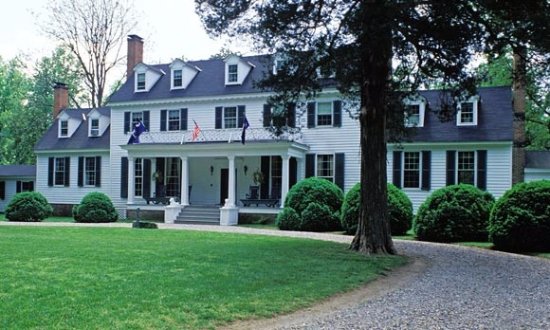 John Tyler purchased the home and its surrounding 1,600 acres in 1842. He bought the plantation from his cousin, Collier Minge, when he was still in the White House. He renamed the plantation "Sherwood Forest" because he considered himself to be a political outlaw, being a president without a party. Tyler expanded the house to its present length of over 300 feet in 1845 when Tyler added a 68-foot ballroom. The Tyler family still maintain the plantation today through the Sherwood Forest Plantation Foundation. Today in non-pandemic times, it is a popular tourist attraction.

The house also is said to have its own ghost.

For over 100 years, almost every occupant of the home who has lived at Sherwood claims to have had an encounter with the "Gray Lady." No one is sure exactly how long the Gray Lady has inhabited the house and there is no explanation as to why she is there. But it is probably safe to say she has been active since possibly late in the 18th century, long before President John Tyler moved in, because many residents over the years claim to have experienced her presence.

One of those who attests to the authenticity of the Gray Lady's presence in the home is Payne Tyler, the wife of Harrison Tyler, a surviving grandchild of John Tyler. According to Payne Tyler, the Gray Lady "is definitely in the house. I know, because I have personally had encounters with her, as has my husband who was a non-believer in such things, and others."

The Gray Lady is thought to have acquired her name she apparently wore gray. There is speculation that she was once in the service of the Tyler family. Servants then wore gray when cleaning the house. According to Payne Tyler, "It is thought that she was a governess, who had charge of a small child at one time here. She would take the child from a first floor bedroom, which is now known, appropriately, as the Gray Room, and walk her up through the hidden staircase to a second floor nursery. There, she would rock the child on her lap in a rocking chair."

The theory behind the reason for the Gray Lady's presence in the house is that the child she cared for was ill and died soon after.
Since then, the sounds of the Gray Lady have been heard in the house. They are reported consistently as footsteps which are heard going up or down the hidden stairway. The sound of her rocking chair is also reported to be heard heard in the second floor nursery and in the Gray Room. Payne Tyler is one of those persons who claim to have heard these sounds. She reports, "The sounds are very distinct and clear. They are footsteps, not creaks or groans of the house. There is an absolute distinction. I have heard the steps or the rocking three separate times since I have been in the house - twice within the first two weeks and once a few months later. Sometimes it sounded like, when she was descending the stairs, she was dragging something. I have no idea what that might have been." Payne Tyler says each time she heard the sounds it was always in the early hours of the morning. She adds, "What was so peculiar was that I always sleep with two guard dogs who bark at the slightest sound, but for some reason neither one of them stirred at all." Asked if she went to investigate the source, Payne replied, "are you serious? I was scared out of my wits. It frightened me so. You have no idea of the fear such a thing can evoke. I actually ran a fever."

Tyler's grandson Harrison Tyler, a chemical engineer, scoffed at the notion of there being a specter in the house. That is until he had his own close encounter. His wife states, "He was not a believer in this sort of thing" until it happened to him. Her husband saw the Gray Lady, who "walked through his bedroom one night. Harrison turned as white as a sheet and nearly fainted. He even lost his breakfast," his wife recalls.

On another occasion, a 16-year-old girl who was a guest in the home, screamed, and ran to her hosts, claiming that she had just heard a woman walk through her room. On another occasion a gardener who was working at the house, reported seeing a door that was being opened and closed by some invisible person. The gardener abruptly left the Tyler's employ.

Payne Tyler actually claimed to have tried to have a talk with the Gray Lady, telling her if the ghost had designs on the house, that was fine, as long as they could peacefully co-exist. She told her apparent housemate, "I'm not moving out. We're just going to have to learn to get along together." Payne claims that she has not heard from the Gray Lady since, except for one incident which she describes as follows: "That was when a cousin of Harrison's was over for a visit, and I told her about the little talk I had with the spirit. She laughed, and chided me, saying she thought I had more intelligence than that. She just kept laughing. Then the most amazing thing happened. The room we were in, the Gray Room, began vibrating wildly, and there were loud bangs, like shutters slamming against the house. It was an eerie feeling. It so unnerved the woman that she quickly left the house. As soon as she was gone, the vibrations and the noises stopped. She didn't come back for another visit for three or four years."

In response to rumors of the Gray Lady's presence, two "psychic experts" visited the house on separate occasions. One said she saw a "tiny woman in an off-color dress with an apron and black shoes, at the top of the stairs on the second floor. The psychic claimed that this was not an apparition, but a real woman, one which disappeared as the psychic climbed up the stairs. The second psychic reported experiencing the same thing. She said she saw a tiny woman at the top of the stairs "in a neutral dress with an overlay down the front and black shoes." This psychic said that she followed the woman into a bedroom and watched her sorting clothes in front of a wardrobe. The wardrobe she described matched a piece of furniture that had been in the house, but had been removed two years earlier. 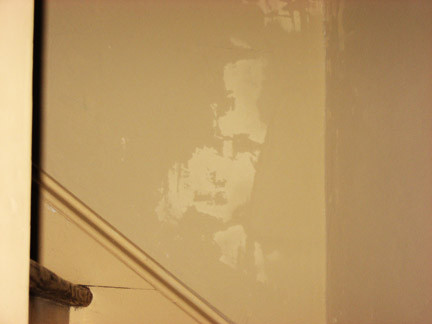 A few years back, the Grey Lady’s image appeared on the haunted staircase. In her 2016 podcast series "Presidential", Lillian Cunningham of the Washington Post had the following conversation with Tim Coyne, who gives tours of the home and helps to maintain it:

TIM COYNE: The Gray Lady supposedly was taking care of an infant whom she had later lost because he had a communicable disease. If you look up the stairwell -- here, let me turn this light off. Underneath the banister on the back wall, what do you see there?

LILLIAN CUNNINGHAM: I don't know. A face. I'm scared. It really does look like a face. I took a photo of it so I can share it with all of you on our Instagram account. But, honestly, I cannot wait to post it because I really want to just delete it off my phone.
It's creeping me out.

TIM COYNE: That's our Gray Lady, and it gets brighter every year. And that has been painted over a few times and had some plaster repair. It just comes right back through here.
Collapse