This month the subject of these posts is going to be off the beaten path for this community. The entries will a cross between Presidential History and the X-Files. We'll write about UFOs, ghosts, other strange phenomena, and of course presidents. Every election, some presidential candidate promises to reveal to the American people what the government's knowledge is about UFOs. Others have claimed to have been visited by Lincoln's ghost. John Tyler's home claims to have a presence known as the Grey Lady. And then there's the story of a President who claimed to have had an encounter with an angel. 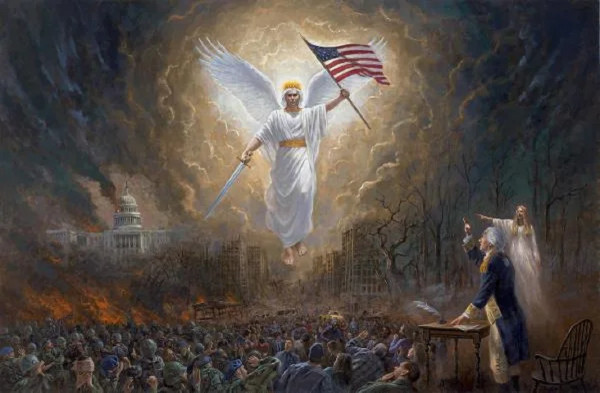 In 1859, 99-year-old Anthony Sherman made the claim that he had been present with George Washington’s army at Valley Forge during the winter of 1777. He related a conversation he claimed to have overheard between George Washington and an officer in his army. According to the story, Washington claimed that an angel had revealed a prophetic vision of America to him. According to Sherman, Washington had the regular habit of going to the woods to pray for aid and comfort from God. Sherman describes one particular day that he described as follows:

"One day, I remember it well, when the chilly winds whistled through the leafless trees, though the sky was cloudless and the sun shown brightly, he remained in his quarters nearly all the afternoon alone. When he came out, I noticed that his face was a shade paler than usual. There seemed to be something on his mind of more than ordinary importance. Returning just after dusk, he dispatched an orderly to the quarters who was presently in attendance. After a preliminary conversation of about an hour, Washington, gazing upon his companion with that strange look of dignity which he alone commanded, related the event that occurred that day."

In a story known as George Washington's vision, Sherman quoted Washington as describing his heavenly encounter with an angel thusly:

This afternoon, as I was sitting at this table engaged in preparing a dispatch, something seemed to disturb me. Looking up, I beheld standing opposite me a singularly beautiful female. So astonished was I, for I had given strict orders not to be disturbed, that it was some moments before I found language to inquire the cause of her presence. A second, a third and even a fourth time did I repeat my question, but received no answer from my mysterious visitor except a slight raising of her eyes. By this time I felt strange sensations spreading through me. I would have risen but the riveted gaze of the being before me rendered volition impossible. I assayed once more to address her, but my tongue had become useless, as though it had become paralyzed.

A new influence, mysterious, potent, irresistible, took possession of me. All I could do was to gaze steadily, vacantly at my unknown visitor. Gradually the surrounding atmosphere seemed as if it had become filled with sensations, and luminous. Everything about me seemed to rarefy, the mysterious visitor herself becoming more airy and yet more distinct to my sight than before. I now began to feel as one dying, or rather to experience the sensations which I have sometimes imagined accompany dissolution. I did not think, I did not reason, I did not move; all were alike impossible. I was only conscious of gazing fixedly, vacantly at my companion.

Presently I heard a voice saying, "Son of the Republic, look and learn," while at the same time my visitor extended her arm eastwardly, I now beheld a heavy white vapor at some distance rising fold upon fold. This gradually dissipated, and I looked upon a stranger scene. Before me lay spread out in one vast plain all the countries of the world — Europe, Asia, Africa and America. I saw rolling and tossing between Europe and America the billows of the Atlantic, and between Asia and America lay the Pacific.

"Son of the Republic," said the same mysterious voice as before, "look and learn." At that moment I beheld a dark, shadowy being, like an angel, standing or rather floating in mid-air, between Europe and America. Dipping water out of the ocean in the hollow of each hand, he sprinkled some upon America with his right hand, while with his left hand he cast some on Europe. Immediately a cloud raised from these countries, and joined in mid-ocean. For a while it remained stationary, and then moved slowly westward, until it enveloped America in its murky folds. Sharp flashes of lightning gleamed through it at intervals, and I heard the smothered groans and cries of the American people.

A second time the angel dipped water from the ocean, and sprinkled it out as before. The dark cloud was then drawn back to the ocean, in whose heaving billows in sank from view. A third time I heard the mysterious voice saying, "Son of the Republic, look and learn," I cast my eyes upon America and beheld villages and towns and cities springing up one after another until the whole land from the Atlantic to the Pacific was dotted with them.

Again, I heard the mysterious voice say, "Son of the Republic, the end of the century cometh, look and learn." At this the dark shadowy angel turned his face southward, and from Africa I saw an ill omened specter approach our land. It flitted slowly over every town and city of the latter. The inhabitants presently set themselves in battle array against each other. As I continued looking I saw a bright angel, on whose brow rested a crown of light, on which was traced the word "Union," bearing the American flag which he placed between the divided nation, and said, "Remember ye are brethren." Instantly, the inhabitants, casting from them their weapons became friends once more, and united around the National Standard.

"And again I heard the mysterious voice saying "Son of the Republic, look and learn." At this the dark, shadowy angel placed a trumpet to his mouth, and blew three distinct blasts; and taking water from the ocean, he sprinkled it upon Europe, Asia and Africa. Then my eyes beheld a fearful scene: From each of these countries arose thick, black clouds that were soon joined into one. Throughout this mass there gleamed a dark red light by which I saw hordes of armed men, who, moving with the cloud, marched by land and sailed by sea to America. Our country was enveloped in this volume of cloud, and I saw these vast armies devastate the whole county and burn the villages, towns and cities that I beheld springing up. As my ears listened to the thundering of the cannon, clashing of sword, and the shouts and cries of millions in mortal combat, I heard again the mysterious voice saying, "Son of the Republic, look and learn" When the voice had ceased, the dark shadowy angel placed his trumpet once more to his mouth, and blew a long and fearful blast. "Instantly a light as of a thousand suns shone down from above me, and pierced and broke into fragments the dark cloud which enveloped America. At the same moment the angel upon whose head still shone the word Union, and who bore our national flag in one hand and a sword in the other, descended from the heavens attended by legions of white spirits. These immediately joined the inhabitants of America, who I perceived were will nigh overcome, but who immediately taking courage again, closed up their broken ranks and renewed the battle.

Again, amid the fearful noise of the conflict, I heard the mysterious voice saying, "Son of the Republic, look and learn." As the voice ceased, the shadowy angel for the last time dipped water from the ocean and sprinkled it upon America. Instantly the dark cloud rolled back, together with the armies it had brought, leaving the inhabitants of the land victorious!

Then once more I beheld the villages, towns and cities springing up where I had seen them before, while the bright angel, planting the azure standard he had brought in the midst of them, cried with a loud voice: "While the stars remain, and the heavens send down dew upon the earth, so long shall the Union last." And taking from his brow the crown on which blazoned the word "Union," he placed it upon the Standard while the people, kneeling down, said, "Amen."

The scene instantly began to fade and dissolve, and I at last saw nothing but the rising, curling vapor I at first beheld. This also disappearing, I found myself once more gazing upon the mysterious visitor, who, in the same voice I had heard before, said, "Son of the Republic, what you have seen is thus interpreted: Three great perils will come upon the Republic. The most fearful is the third, but in this greatest conflict the whole world united shall not prevail against her. Let every child of the Republic learn to live for his God, his land and the Union." With these words the vision vanished, and I started from my seat and felt that I had seen a vision wherein had been shown to me the birth, progress, and destiny of the United States.

The story is told in William Birnes' 2018 book UFOs and the White House in which Birnes speculates that Washington's encounter may have been one with an extraterrestrial.

The only problem is that the story is a work of fiction. The story was written by Charles Wesley Alexander, a Philadelphia journalist who published The Soldier’s Casket, a periodical for Union veterans of the Civil War. Writing under the pseudonym “Wesley Bradshaw,” Alexander wrote of several fictional works about historic American figures. These were published in various newspapers during the Civil War and were later offered for sale. First published in April 1861, the story of Washington’s praying “to God in secret for aid and comfort” during the darkest days of the American Revolution and of his being visited by an angel who revealed to him a vision of the United States victorious was intended to motivate Unionists in their time of crisis.

During the war Alexander penned several other similar stories about both historical and contemporary American figures (e.g., Abraham Lincoln, Ulysses S. Grant), including one called “General McClellan’s Dream,” a narrative in which McClellan, then the general-in-chief of the Union Army, fell asleep at his desk and was awakened by a vision of George Washington. Alexander also published other strange tales, including several about female Union soldiers with supernatural powers and one of a demonic Englishwoman who fought on the side of the Confederacy. 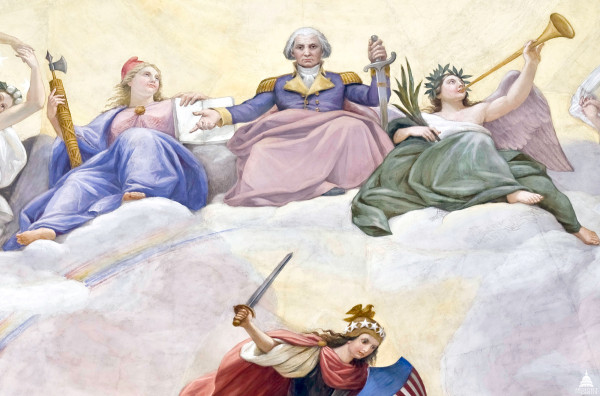 There was in fact an officer named Anthony Sherman who did serve in the Continental Army, at Saratoga under the command of Benedict Arnold at the end of 1777. But this Anthony Sherman wasn’t with Washington’s forces at Valley Forge during the winter of 1777-78.
Collapse