It's Canada Day today. On July 1, 1867 (153 years ago today) the Dominion of Canada came into being as four British colonies formed a Confederation and gained nationhood status. Since that time, Canada and the United States have shared the world's longest undefended border. For over sixty years it was a tradition for a new president to make his first state visit to Canada since Franklin Delano Roosevelt visited Quebec City on July 31, 1936. That tradition was broken in 2001 by George W. Bush, whose first state visit was to Mexico, but his second was to Canada. Barack Obama followed the tradition, but Donald Trump chose not to follow it, traveling to Saudi Arabia instead. President Trump made his first visit to Canada when he attended the G-7 Summit in La Malbaie, Quebec in June of 2018. 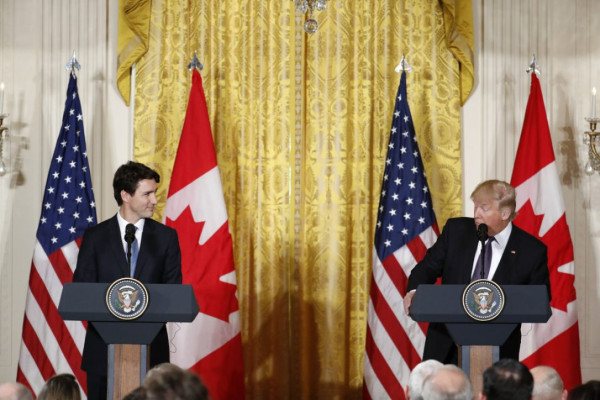 Canadian Confederation came about largely from a fear that the four Canadian colonies would be invaded by the United States. Great Britain's military budget was stretched pretty thin, in 1867 and the time was right for giving Canadians peaceful independence. At the time, Secretary of State William Seward desperately wanted to expand the nation north. The story of how all of this led to Canadian nationhood is ably explained in author John Boyko's wonderful and informative 2013 work entitled Blood and Daring: How Canada Fought the American Civil War and Forged a Nation (reviewed here).

The relationship of the two nations began with a rocky start. Like Seward, President Ulysses Grant also had dreams of making Canada part of the United States. When the first Prime Minister of Canada, Sir John A. Macdonald, visited Washington, D.C. in 1871, Grant did not want to meet with Macdonald and didn't even send any official to greet the Prime Minister on his arrival. The two men met twice, and Grant was cold towards Macdonald on both occasions.

Canada would be 66 years old before a US President visited Canada in an official capacity, although William Howard Taft loved to vacation in Quebec and Woodrow Wilson vacationed in Ontario. Warren Harding made the first presidential visit to Canada on a Vancouver stopover from Alaska in 1923. (It was later in that same trip that Harding died in San Francisco.) Harding played a round of golf in Vancouver and made a very cordial speech, some of the words of which are memorialized in a monument in Vancouver's Stanley Park. (One of my favorite journal entries in this community is about a trip I made to Stanley Park to look for the monument, which I entitled Finding Warren Harding or Forgive Me My Trespasses.) Vancouver has another notorious connection to the Presidency. The Vancouver Cigar Company continues to advertise itself as being the place where Bill Clinton bought the infamous cigar mentioned in the Starr Report in the section detailing Clinton's shenanigans with Monica Lewinsky. 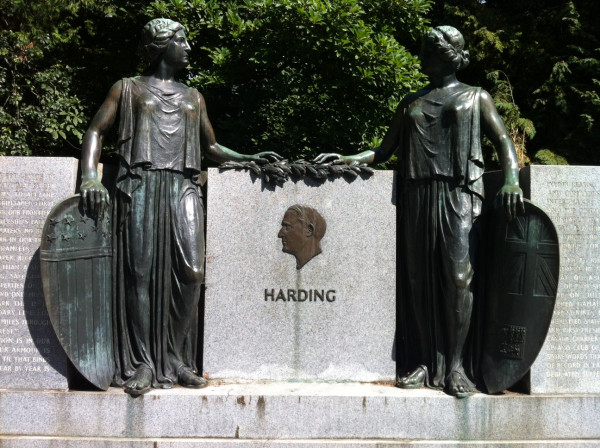 The first consequential visit made by a President to Canada was when Franklin Delano Roosevelt visited Quebec City in 1936. “I have never heard a Canadian refer to an American as a ‘foreigner,’” Roosevelt said in Quebec City. “He is just an ‘American.’ And in that same way, in the United States, Canadians are not ‘foreigners,’ they are ‘Canadians.’” The partnership of Franklin D.Roosevelt and Prime Minister William Lyon Mackenzie King was an interesting one, as both men dominated their respective governments for much of the Great Depression and the Second World War. Each was the longest-serving leader of their respective nation, Roosevelt for 12 years and King for 22 years. Roosevelt's cordiality towards Canada was especially charitable, given than FDR would have more reason than most to hold a resentment against the nation. It was at his vacation home of Campobello Island, part of the Canadian province of New Brunswick, where FDR was struck with polio and lost the ability to walk.

Things have not always been so friendly, especially when the leaders came from opposite ends of the political spectrum. For example, in 2002 when Françoise Ducros, a top aid to then Prime Minister Jean Chrétien, called President George W. Bush "a moron," while Bush's staff called Chretien "dino", short for dinosaur. Even earlier than this there were times when relations were less than cordial. In a 1961 speech to the Canadian Parliament, President John F. Kennedy characterized the relationship between the U.S. and Canada by saying: "Geography has made us neighbors, history has made us friends, economics has made us partners, necessity has made us allies." But privately Canadian Prime Minister John Diefenbaker said of President John F. Kennedy: "He's a hothead. He's a fool – too young, too brash, too inexperienced and a boastful son of a bitch!" 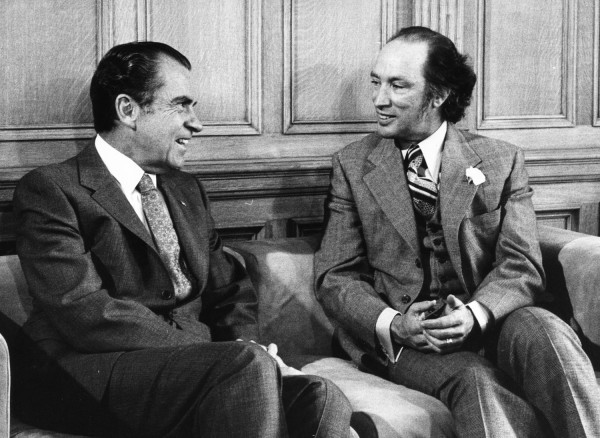 In 1965 at the height of the Vietnam War, Prime Minister Lester Pearson (winner of the Nobel Peace Prize for his work in making Canada a leader in peace-keeping) visited President Lyndon Johnson at the White House. Pearson had just made a scathing speech the previous night, in which he was critical of US involvement in the Vietnam War. He appeared at the White House the next day to confront a livid Johnson. According to journalist Lawrence Martin, LBJ grabbed Pearson by the shirt collar, lifted the diminutive prime minister off of the floor and shouted, "You pissed on my rug!"

In 1969 Canadian Prime Minister Pierre Trudeau told the National Press Club in Ottawa that living next to the U.S. "is in some ways like sleeping with an elephant. No matter how friendly or temperate the beast, one is affected by every twitch and grunt." Two years later, in 1971 it was revealed that President Richard Nixon called Prime Minister Pierre Trudeau "an asshole" in his private tapes. Trudeau replied, "I've been called worse things by better people." Later that year, after Trudeau had left a session with Nixon in the Oval Office, and Nixon said to H.R. Haldeman, his chief of staff: "That Trudeau, he's a clever son of a bitch." Trudeau so infuriated Nixon during the visit that Nixon called him "a pompous egghead" and told Haldeman: "You've got to put it to these people for kicking the U.S. around after what we did for that lousy son of a bitch. Give it to somebody around here." This was when Nixon ordered Haldeman to plant a negative story about Trudeau with columnist Jack Anderson.

But there have also been many instances of friendly and respectful relations. For example, Prime Minister Brian Mulroney and President Ronald Reagan had a very strong relationship, likely because of their common conservative point of view. At one function on St. Patrick's day in 1985 when Reagan was visiting Canada, the two men joined together to sing "When Irish Eyes Are Smiling." Mulroney would later speak at Reagan's funeral with fond remembrances. In September of 2000 George H. Bush and his wife Barbara attended the wedding of Caroline Mulroney, daughter of the former Prime Minister.

In 2001, following the September 11th tragedy, thousands of airline travelers were diverted to Canadian airports and given assistance. President George W. Bush, in a speech to Congress, thanked countries all over the world for standing with the United States in its fight against terror after the attacks on the World Trade Center and Pentagon. He did not mention Canada. Some perceived this as a snub, but an aide to Prime Minister Jean Chrétien said: "If it is anything, it is an indication that our support goes without saying." The aide was Françoise Ducros. In November of 2004, George W. Bush received a chilly reception in Ottawa when he made his first state visit to Canada. About 5,000 protesters turned up on Parliament Hill, and a smaller group clashes with police outside the Chateau Laurier hotel.

Barack Obama made his first state visit to Canada in 2009, but has appeared to show little interest in his northern neighbor, although the two nations did cooperate in the bailout of General Motors. Among the issues causing tension during the Harper and Obama years were the Keystone XL pipeline (Obama did not support a proposed pipeline from Alaska to the 48 states through Canada, while Harper saw the economic advantages for Canada), the new Detroit-Windsor bridge that Ottawa had essentially offered to build for Michigan (but the Obama administration will not kick in $250 million for a needed customs plaza at the same time the U.S. Senate wanted to spend tens of billions reinforcing the southern border with Mexico), a dispute over improvements to the Peace Bridge at Fort Erie, and differences of opinion over Israel.

Relations between Donald Trump and current Canadian Prime Minister Justin Trudeau (son of former Canadian Prime Minister Pierre Trudeau) have not gone so well. In April of 2017, Trump announced a 20 per cent tariff on Canadian lumber entering the U.S. Then early last month, Trudeau expressed his disappointment with Trump over the president's decision to pull out of the Paris climate change agreement. Trudeau said, "We are deeply disappointed that the United States federal government has decided to withdraw from the Paris agreement. Canada is unwavering in our commitment to fight climate change and support clean economic growth. Canadians know we need to take decisive and collective action to tackle the many harsh realities of our changing climate."

The prospect of a U.S. immigration crackdown also prompted hundreds of asylum seekers to cross the Canada-U.S. border to make their claims in Canada instead. The night of Mr. Trump’s election win saw a huge spike in interest in Americans moving north. Immigration, Refugees and Citizenship Canada’s website suffered outages due to heavy traffic. During the early stages of the Corona virus pandemic, President Trump ordered a stop to the export of surgical masks and respirators from the United States to Canada. 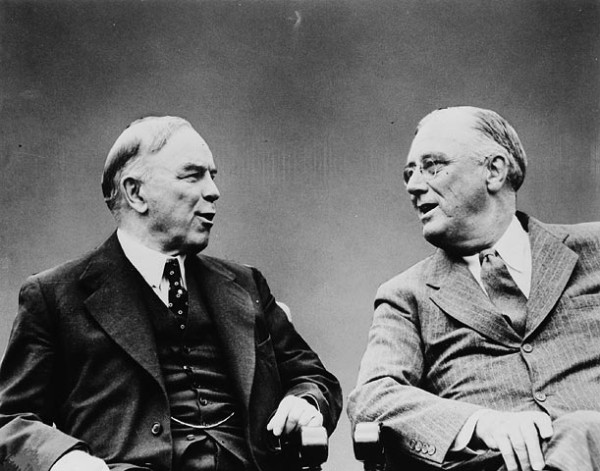 The future of relations between the two countries will face many more challenges. Evan Annet of the Globe and Mail wrote:

Canada and the U.S. are as different as can be on trade right now. One is led by a liberal who champions global trade, the other by a nativist conservative who, in his inauguration speech, pledged an “America first” attitude to not only trade, but immigration, foreign policy and taxes. Mr. Trump wants to renegotiate the North American free-trade agreement with Canada and Mexico. Any new agreement would have dramatic implications for Canadian businesses and the flow of goods and workers between the countries. The earliest NAFTA renegotiations can officially begin is this August, and in the meantime, Canada has contentious issues to work out with Washington about its dairy supply-management system and softwood lumber exports.

The era of good feelings for US-Canada relations may be suspended for the time being. President Trump and Prime Minister Trudeau continue to be openly critical of one another. As recently as last December, the two leaders traded insults with Trump calling Trudeau "two faced" after Trudeau and other world leaders were overheard mocking the President at the recent G-7 summit.

The US remains Canada’s largest trading partner, a relationship valued at $673.9 billion. A recent report prepared by the CD Howe Institute finds that the tariffs will cause significant economic pain in both countries: Canada could lose as many as 6,000 jobs and a 0.33% GDP reduction, whereas the US would lose 22,700 jobs, but only a 0.02% disruption to the GDP. Canada has introduced more than $16bn in retaliatory tariffs against the United States, meant to inflict targeted pain on politically vulnerable industries, such as whisky, orange juice, frozen pizzas and soy beans. President Trump has threatened to impose a 25% tariff on Canadian-made automobiles, a move that would devastate the $80 billion Canadian auto industry. These are troubling times for Canada-US relations.

But for today, let's send best wishes for a Happy Canada Day.
Collapse