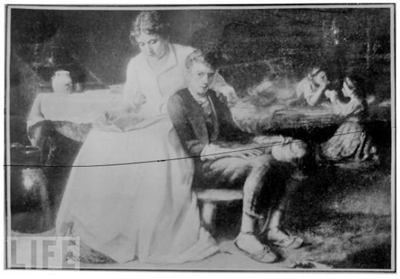 Abraham Lincoln was born on Sunday, February 12, 1809. He was the second child and the first son of Thomas Lincoln and the former Nancy Hanks. Lincoln was born, fittingly enough, in a log cabin located near Hodgenvillie, in Hardin County, Kentucky. It was a windowless log cabin with a dirt floor. His paternal roots reached back to England, where Thomas's ancestors left in 1637 to settle in Massachusetts. Thomas's father, who was also named Abraham Lincoln, died in 1786 in an attack by an unfriendly Native American tribe, at Hughes Stanton, a fort located about 20 miles east of modern day Louisville. Thomas was a carpenter and a farmer, but had no formal education. Little is known about Nancy Hanks' ancestry. According to former Presidential candidate George McGovern, one of Lincoln's biographers, Lincoln himself believed that his mother had been born "out of wedlock". Nancy had worked as a seamstress. They called their farm "Stinking Spring".

In 1811 Thomas moved his family, composed of Nancy, his four year old daughter Sarah, and the future president, then a two-year-old, to another farm near Knob Creek in Graves County, Kentucky. There, a third child named Thomas was born, but he died in infancy. Lincoln and his sister attended ABC school, taught by itinerant teachers, and Nancy joined the local Baptist church. Thomas farmed and also worked at the local jail guarding prisoners and helping to build roads.

In December of 1816 the family moved once again, this time out of state to Pigeon Creek, in Spencer County, Indiana. Thomas cleared the land, built a cabin and planted 17 acres, with help from his 7 year old son. In 1818 Nancy died from a condition called milk sickness, caused by drinking the milk of a cow that had eaten poisonous white snakeroot. Lincoln was said to have taken the death of his mother quite hard.

Thomas soon remarried, to a woman he had known since childhood, named Sarah Bush Johnson. She was a widow and had three children. The blended family seemed to get along well and Sarah seemed to bring order to the household. She had Thomas install a floor in the cabin and put in windows. More importantly to the future President, she took an interest in Abraham Lincoln's education. She gave him some of her books and encouraged him to pursue his education. The two forged a strong bond, and she later said, "Abe was the best boy I ever saw. He never gave me a cross word or look, and never refused, in fact or even in appearance, to do anything I requested him." Lincoln himself referred to her as his "best friend" adding that no son could ever love a mother more than he loved her.

Thomas, on the other hand, saw his son's desire for more education as contributing to the loss of his main laborer. The two quarreled over the son's inattention to his chores. Lincoln said that although his father taught him to work hard, "he never learned me to love it." Lincoln's poor work ethic when it came to physical labor caused a rift between father and son, and sometimes resulted in corporal punishment. Another cause for conflict was Lincoln's refusal to attend the Little Pigeon Baptist Church.

In his late teens, Lincoln traveled around the region attending barn raisings, corn shuckings and other community gatherings. He developed a reputation as an entertaining joke and story teller. He and his cousin Dennis Hanks sawed firewood that they sold to steamships. In the summer of 1828, he and his cousin were hired by a businessman named James Gentry to pilot a flatboat along the Mississippi River to New Orleans. They managed to fight off some would-be robbers along the way. In New Orleans, Lincoln saw enslaved people being bought and sold before returning home.

In 1830 Thomas Lincoln moved his family once again, this time to Macon County, Illinois. But after putting down roots, Thomas Lincoln moved yet again, this time to Coles County. Abraham Lincoln was now 21 years of age. He decided not to accompany the family. With his cousin Dennis Hanks and his stepbrother John Johnston, they went to Springfield. They worked operating a flatboat at first. Their employer, Dennis Offutt, was impressed with Lincoln, and offered him a job working at a general store that Offutt was opening in New Salem, Illinois. Lincoln excelled at the work and became liked by the townsfolk. He engaged in a wrestling match with a local tough named Jack Armstrong. The two later became good friends.

Lincoln's popularity in the community led to his first foray into politics. Though he had lived in New Salem for less than a year, in March of 1832 he ran for the Illinois General Assembly. His campaign platform called for navigational improvements on the Sangamon River. His skill as an entertaining speaker could not make up for a lack of education, well connected or powerful friends, and most importantly, money, and he lost the election.

The store was doing poorly and Lincoln found himself in need of work. He volunteered to serve in the Illinois Militia to respond to an uprising led by Chief Black Hawk, known as the Black Hawk War, and he was elected to serve as a captain of his company. Fortunately for Lincoln, he never was involved in any battles or skirmishes, and would later joke about his service, claiming that he had "fought his way through hordes of mosquitoes." He returned home to his campaign, but finished eighth out of 13 candidates (the top four were elected), though he received 277 of the 300 votes cast in the New Salem precinct. 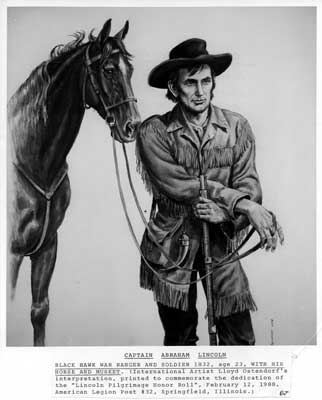 Though he was not successful, his political connections got him a job as local postmaster. A second attempt at running a general store failed because his partner was an alcoholic who drank up the profits. He then took a job as a deputy county surveyor. He continued his interest in politics, declaring his support for the Whig Party, and becoming an admirer of Henry Clay, as well as a critic of Andrew Jackson. In 1834, Lincoln was elected to the Illinois House of Representatives, finishing second among thirteen candidates. He would serve four terms, leaving the House in 1842. Though Lincoln would go on to lose more elections that he won, prior to his Presidency, he had found the career for which he had been born.
Collapse