Dr. George Tryon Harding (known by his second name) was not yet Dr. Harding when in the winter of 1864 he returned home to Blooming Grove, Ohio from the war. Harding was born in Blooming Grove, the third of ten children. Only he and five of his sisters would live to adulthood. His father was successful farmer who was able to afford to send his son to school. Tryon Harding graduated in 1860 with a bachelor's degree, and then began teaching at a small school just outside of Mount Gilead, Ohio. But in 1863, the 20 year old Harding enlisted in the Union Army as a fifer in the 96th Ohio Infantry. However, he caught pleurisy soon afterward, and received a medical discharge a few weeks later without ever having left Ohio. After convalescing at his parents' home and recovering, Harding re-enlisted as a drummer. His unit shipped out to Virginia in May 1864, where he was stationed at Fort Williams. Perhaps his fondest memory of the war was when, while on a furlough, he and two of his friends visited the White House in Washington, D.C., where they met with President Abraham Lincoln. Lincoln shook their hands. In August 1864, Harding was again taken ill, this time with typhoid fever. He received a second medical discharge two weeks later. 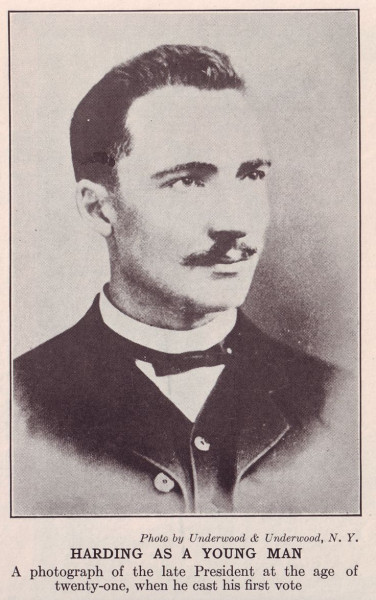 Once again Tryon Harding went home to Blooming Grove to recover, this time to be with his new wife, the former Phoebe Dickerson. They had gotten married on May 7, 1864. They had became secretly engaged and had eloped just before Harding was due to ship off to Virginia, marrying in Galion, Ohio, at the home of the local Methodist minister. Phoebe's parents did not learn of their marriage until Harding returned from the war.

On November 2, 1865, the couple welcomed their first child into the world, a son that Tryon named Warren Gamaliel, overruling his wife's preferred name of Winfield. Warren was Tryon's grandmother's maiden name and Gamaliel was the name of a favorite uncle. Warren would be the oldest of eight children, two of whom would not survive their infancy. His parents called him "Winnie", a consolation to his mother's preferred baby name.

The young family moved into a small house on the Harding property. "Winnie" was a bright child who was taught by his mother to read by the time he was four years old. She taught Sunday School and used some of the word cards as teaching aids for her own son. Young Warren is described as being "a born talker", Phoebe told her son that he would someday become President of the United States. From his father Warren inherited musical talent and learned to play the coronet by age nine.

Both Tryon and Phoebe Harding studied homeopathic medicine. At that time, one became a medical doctor by studying under a practicing physician before attending medical school. Tryon obtained his license to practice medicine first and Phoebe commenced her studies a few years later, also serving as a midwife. They maintained the family farm, with much of the labor coming from their oldest son.

In 1876 Tryon invested in the purchase of a local newspaper, the Caledonia Argus. Eleven year old Warren was apprenticed as a printer's devil, and Warren honed his typing skills. At the same time, Warren was doing well in school, despite not having a lot of time to study because of his work at the newspaper and on the farm. His teachers reported that he was "naturally smart".

In 1879 at age 14, Warren Harding enrolled at Ohio Central College in Iberia, Ohio. To supplement the cost of his school, he painted houses and barns and worked in railroad construction in the summers. He was said to be a hard worker with a good worth ethic. In college he got his best marks in literature and philosophy. In his last year at college he and his friend Frank Harris began a college newspaper called the Iberia Spectator. It was in college that he also earned a reputation as a ladies man, but was also a devoted son, visiting his mother every Sunday to bring her flowers.

In Harding's last year in college his family moved to Marion, Ohio, and in 1882 he rejoined his family following his graduation. The Hardings' medical practice prospered and the family bought a large house in the center of town. Warren taught school at a one room school house, but quickly realized that teaching was not to be his preferred career. He considered a career in law, but found reading law to be boring. He sold insurance while also starting up a local town band. When the Marion Star, a daily newspaper, was about to be auctioned off at a Sheriff's sale, he and his friend Jack Warwick purchased the paper, with help from his father, who cosigned a loan. One of the paper's assets was an unlimited railroad pass, and this allowed Harding to travel to Chicago in 1884 to attend the Republican Party's nominating convention. There he made valuable connections, not only with fellow press people, but also meeting New York State Assemblyman Theodore Roosevelt, and the winning candidate James G. Blaine. 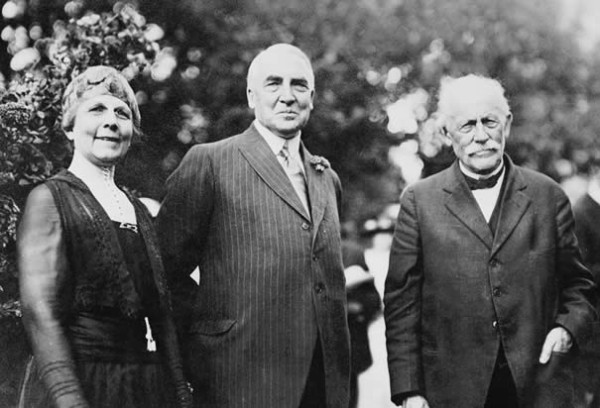 Warren Harding had been bitten by the political bug. In the years to come, he would make the transition from newspaperman to politician and elected official, serving as a state senator, Lieutenant Governor of Ohio, a US Senator from Ohio, and finally President of the United States.
Collapse