As I write this entry, I am about halfway through Tim McGrath's new doorstop of a biography called James Monroe: A Life, which I am enjoying thoroughly. Monroe has always been one of my favorite Presidents, a man who seemed capable of any job given to him (and he had a lot of them), but always overshadowed by others such as Washington, Jefferson or Madison. 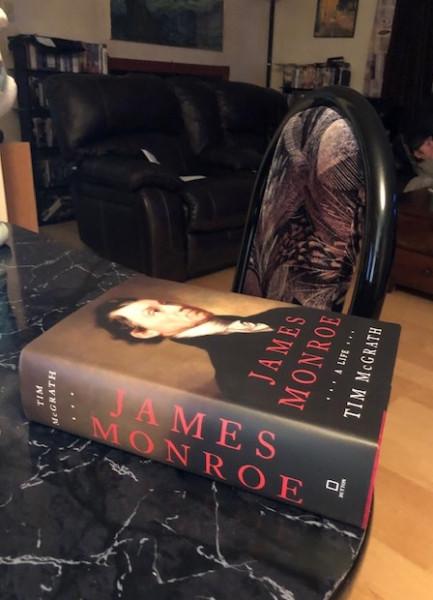 Monroe was born on April 28, 1758, in his parents house in Westmoreland County, Virginia. His paternal great-great-grandfather was Patrick Andrew Monroe, a man who emigrated to America from Scotland in the mid-17th century. He was part of an ancient Scottish clan known as Clan Munro. In 1650 he obtained a large tract of land in Washington Parish, Westmoreland County, Virginia. Spence Monroe was a farmer and also a carpenter. Monroe's mother was the daughter of James Jones, who immigrated from Wales and settled in nearby King George County, Virginia. Jones was a wealthy architect. James was the second of five children in the family, and the oldest son.

Spence Monroe was among a group of local farmers who signed a pledge in 1766 against the purchase and consumption of imports from England until the hated Stamp Act tax was repealed. At the time, James Monroe's maternal uncle, James Jones, was a member of the Virginia House of Burgesses and a Judge, and he was someone who would have a tremendous influence on the future president. Jones was on the committee that drafted the Virginia Declaration of Rights as well as the Virginia Constitution and Jones would also be a member of the Continental Congress. Patriotism ran deep in James Monroe's bloodline. Judge Jones was also a friend of George Washington, Thomas Jefferson and James Madison. He would become Monroe's patron, his advisor and a strong influence on him for the remainder of his life, on both personal and political matters.

At age 11, James Monroe enrolled in Campbelltown Academy, a school run by Parson Campbell. He was only able to attend school for eleven weeks of the year as his help was needed on his father's farm, but while at this school he forged a friendship with John Marshall. The two would enroll in William and Mary College in 1774 and they would also serve together in the Revolutionary War.

Monroe's mother died in 1772, and his father two years later. He inherited property from both of his parents, but at age 16, Monroe had to withdraw from school to support his younger brothers. Joseph Jones became a surrogate father to Monroe and his siblings. It was Jones who took Monroe to the capital of Williamsburg, Virginia, and enrolled him in the College of William and Mary, helping with financial support for the family while James was at College. Jones also introduced Monroe to important Thomas Jefferson, Patrick Henry, and George Washington.

In 1774, as opposition to the British government grew in the colonies, Virginia sent a delegation to the First Continental Congress. Still a student at William and Mary, Monroe became involved in the acts of opposition to Lord Dunmore, the colonial governor of Virginia, and took part in the storming of the Governor's Palace.

On May 15, 1776, Virginia issued its own "Declaration of Independence" and shortly thereafter, about a year and a half after his enrollment at William and Mary, James Monroe dropped out of college and joined the 3rd Virginia Regiment in the Continental Army. Literacy was a valuable skill in the new army and Monroe was commissioned with the rank of lieutenant, serving under Captain William Washington, a second cousin to the Commander of the Army. After months of training, Monroe and 700 Virginia infantrymen were sent to join the Continental Army in the New York and New Jersey campaign.

Shortly after the Virginians arrived, George Washington led the army in a retreat from New York City into New Jersey and then across the Delaware River into Pennsylvania. In a famous but historically inaccurate painting of Washington Crossing the Delaware painted by Emanuel Luetze in 1851, James Monroe is portrayed as holding the flag on the boat that Washington was standing in. In truth, the two crossed on different boats and it is unlikely that anyone stood up in the boat.

In late December, Monroe took part in a surprise attack on a Hessian encampment at the Battle of Trenton. The attack was a success, but Monroe was shot in the shoulder, suffered a severed artery in the battle and nearly died. It was a fortuitous encounter with a local surgeon Dr. John Riker, who came along to provide directions, that saved Monroe's life. In the aftermath, Washington cited Monroe and William Washington for their bravery, and promoted Monroe to captain. Another famous painting by John Trumbull, The Capture of the Hessians at Trenton on December 26, 1776, shows a wounded Monroe in the picture. 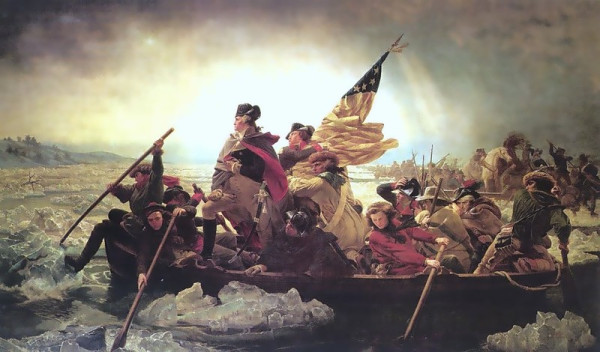 After his wounds healed, Monroe returned to Virginia to recruit his own company of soldiers. But he found few followers, largely due to his lack of wealth to induce soldiers to join his company. Monroe then asked his uncle to use his influence to help to return him to the front. Monroe was assigned to the staff of General William Alexander, Lord Stirling. It was during this time he formed a close friendship with the Marquis de Lafayette, a French volunteer, and their lives would intersect many years later when Monroe was Ambassador to France during Washington's presidency, and Lafayette's wife Adrienne was a prisoner of the French Revolution whose release Monroe helped to secure.

Monroe served in the Philadelphia campaign and spent the winter of 1777–78 at Valley Forge, sharing a log hut with John Marshall. He saw action in the Battle of Monmouth. Monroe resigned his commission in December 1778 and joined his uncle in Philadelphia. After the British captured Savannah, the Virginia legislature decided to raise four regiments, and Monroe returned to his native state, hoping to receive his own command. He was armed with letters of recommendation from Washington, Stirling, and Alexander Hamilton. Monroe received a commission as a lieutenant colonel and was expected to lead one of the regiments, but was once again unsuccessful at recruitment. Instead, on the advice of his uncle, Monroe returned to Williamsburg to study law, where he was taken under the wing of Virginia Governor Thomas Jefferson.

The Virginians moved the capital from Williamsburg to the more defensible city of Richmond. Monroe accompanied Jefferson to the new capital where Governor Jefferson held command over its militia. He made Monroe a colonel and in this capacity, Monroe established a messenger network to coordinate with the Continental Army and other state militias. But he was still unable to raise an army due to a lack of interested recruits. Monroe was unable to serve during the Yorktown campaign. 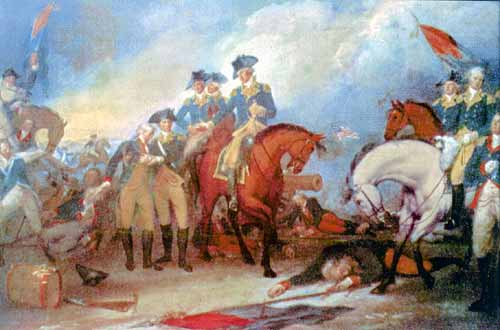 Monroe resumed studying law under Jefferson and continued until 1783. Monroe was admitted to the Virginia bar and practiced in Fredericksburg, Virginia. He was able to make a number of valuable political connections that would help pave his path to the presidency.
Collapse