It is a remarkable coincidence that in 1840, both of the candidates on the Whig Party ticket for President and Vice President had both been born in the same county, Charles City County, Virginia, albeit 17 years apart. John Tyler (no middle name) was born on a beautiful plantation known as Greenaway, located on 1200 acres of very fertile soil within the county on March 29, 1790. He was the second son and the sixth of eight children born to John Tyler Sr. and the former Mary Armstead. The record of Tyler's early years was not preserved, as many of his personal papers were destroyed during the Civil War when Union soldiers occupied his plantation after his death. Tyler was the only former US President to have joined the Confederacy and his life would end with a Confederate flag being draped over his coffin prior to his burial at Richmond. 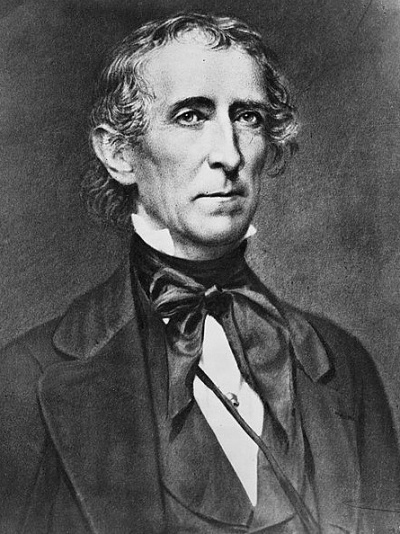 John Tyler Sr. was better known to locals as Judge Tyler. The president's paternal grandfather, also a John Tyler, had been Marshall of Virginia colony's Vice-Admiralty Courts, having jurisdiction over trade matters. Judge Tyler was a friend and college roommate of Thomas Jefferson's. Judge Tyler recalled that he and Jefferson had gone to listen to Patrick Henry speak in 1765 sowing the seeds of revolution. He wrote that his "soul caught fire at the sound of Henry's voice" and he went on to write scathing articles in newspapers and pamphlets that were critical of King George III. Marshall Tyler disapproved of this and warned his son, "they will hang you yet for a rebel".

Judge Tyler attended William and Mary College where he studied law. He married Mary Armstead, the daughter of a wealthy Virginia planter. The political bug bit Judge Tyler and he was elected to the Virginia House of Delegates, serving from 1778 to 1786, serving as speaker of the House for a time. From 1788 to 1798 he was a judge of Virginia's General Court and in 1808 he was elected as Governor of Virginia. In 1813 he became a judge of the US district court, but died later that year.

Judge Tyler was described as a very attentive father to his eight children. Mary Tyler died in 1797, when her son John was 7, and after that he was cared for by a housekeeper named Mrs. Bagby. He grew up on a plantation that was tended to by approximately 40 enslaved persons, and on which corn, wheat and tobacco were the main crops. The Tylers also raised thoroughbred horses. Tyler's biographer Robert Seager writes that John Tyler adopted his father's political worldview.

Judge Tyler was said to hold family gatherings under a tree described as "the grand old willow that caressed the house" and tell them stories of his youth, read stories adding dramatic voices, and play his violin for them. Politics was a frequent subject of discussion and Judge Tyler would extol the virtues of the government that the revolution had brought about. He opposed ratification of the Constitution, likely influenced by the views of his hero Patrick Henry. In 1788 Judge Tyler wrote, "When I consider the Constitution in all its parts, I cannot but dread its operation. It contains a variety of powers too dangerous to be vested in any set of men whatsoever." The rights of his state of Virginia were a paramount consideration for Judge Tyler.

In 1802 a twelve year old John Tyler entered the College of William and Mary, as his father and grandfather had done. He was remembered by peers as a quiet and studious boy who preferred playing the violin or writing poetry to physical activities. He was slight physically and suffered from a number of illnesses that included intestinal pain and respiratory ailments. But he was a top scholar, whose favorite subjects included ancient history, the works of Shakespeare, Latin and Greek. He read Adam Smith's book "The Wealth of Nations" and adopted its protectionist philosophy. His teachers were very critical of his penmanship. One report card has these comments from a teacher: "I am mortified to find no improvement in your handwriting. Neither do you conduct your lines straight, which makes your letters look too abominable. It is an easy thing to correct this fault, and unless you do so, how can you be fit for law business of every description?" Tyler took the advice to heart, improved his handwriting, and would later chastise his own children for their poor penmanship.

At William and Mary, Tyler was strongly influenced by Bishop James Madison (second cousin to the President of the same name), who was a dynamic speaker who argued that God had created the new nation in order to spread republican virtue and enlightenment throughout the world. Tyler graduated from William and Mary in 1807 at age 17. He was selected as one of four students who would deliver his class commencement address, and spoke on the topic of education for females. The address was considered to be a good one by most listeners who rewarded him with strong applause, but Bishop Madison was said to be enraged by such a notion.

From there, Tyler pursued a career in law, first studying under his father and his cousin Samuel Tyler. When Judge Tyler became Governor Tyler, his namesake son went to study under former Attorney-General Edmund Randolph, a Federalist. The two had differing political philosophies. He concluded his studies and was admitted to the bar at age 19, even though this was below the age of admission. He prospered as a lawyer, specializing in criminal law. Following his father's example, he was elected to the Virginia House of Delegates in 1811 at age 21.

In 1809 John Tyler had met Letitia Christian at a graduation party. She was the daughter of a wealthy and influential plantation owner Robert Christian who also served in the Virginia House of Delegates as a Federalist. After a four year courtship, they were married in 1813. In one of his letters to her, Tyler wrote "Whether I float or sink in the stream of fortune, you may be assured of this, that I shall never cease to love you." They were married on his 23rd birthday, March 29, 1813, just two months after the death of his father. 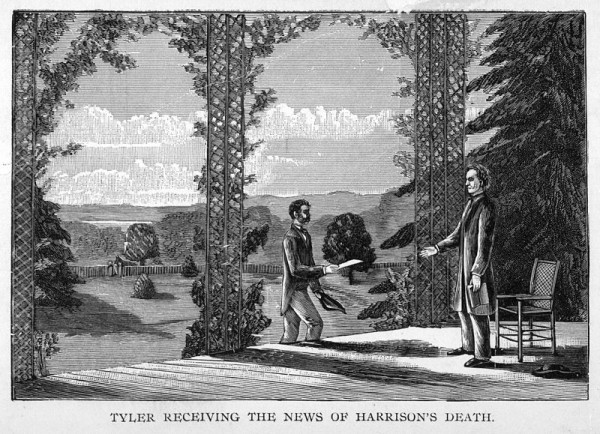 Tyler served as a captain in the Charles City Rifles, a local militia that joined the 52nd Regiment of the State Militia. They marched to Williamsburg, waiting for battle, housed in a dormitory at the William and Mary campus. Tyler never saw action during the war, and he resumed his political career that would eventually take him on a path to the White House over a quarter of a century later.
Collapse