Jimmy Carter was born on October 1, 1924, at what was then known as the Wise Sanitarium in Plains Georgia, a son of the south. (The sanitarium was subsequently renamed not for Carter, but for his mother.) What was it that caused this enlightened southern governor, a Democrat, to reject the segregationist and racist political and moral beliefs embraced by the Bull Connors, the Lester Maddoxes, the George Wallaces and the Strom Thurmonds that dominated the Democratic politics of the times in which Carter grew up? His father, also named James Earl Carter, was a successful southern farmer and land owner, who also ran a general store and who had been raised in the southern baptist faith. His ancestors came to the United States in 1635, settling in Virginia. His mother, the former Bessie Lillian Gordy, who later became known as "Miss Lillian", was an independent-minded registered nurse whose father had been a local postmaster with more progressive views on race relations.

Perhaps Carter's enlightened attitudes gelled in 1928 when the family moved from Plains, a thriving community of 600 people, to the much more rural Archery, Georgia, a town almost entirely populated by poorer African-American families. There the Carters operated a 350 acre farm, growing peanuts. James Carter Sr., who was called Earl, also operated a grocery store and owned a warehouse. As he grew up, young Jimmy helped his parents in their various operations including chopping wood. One of his favorite free time activities was said to be sitting and listening to the radio with his father in the evenings. Three more children joined the family: sisters Gloria and Ruth and younger brother Billy. Earl was said to be a strict disciplinarian. Carter's biographer Julian Zelizer writes, "Some observers blamed his father's tough demeanor for two traits in Jimmy: his propensity to exaggerate accomplishments, which they said came from a desire to please his father, and his ability to smile in almost any situation, which he used to mask his anger toward his dad."

The Carters were active in the Plains Baptist Church, which had a congregation of about 300 members. Though active church members, it is said that Earl liked to drink and party, and Lillian liked to play poker. Archery had segregated schools and white children attended Plains High School, while African-American children had the option of being home schooled. Because the town had a much larger population of African-Americans, Jimmy Carter played with African-American children daily. The remoteness and isolated nature of the community allowed him to do so, contrary to the norms of the times. Two of his best childhood friends, known as A.D. and Edmund, were African-American.

Lillian Carter resumed her nursing career when Jimmy was 5, and the caregiver for Jimmy and his siblings was an African-American woman named Annie Mae Hollis. Another African-American man, Jack Clark, was one of Earl's best workers and Earl taught Jimmy the ABCs of farming. A local clergyman in the African Methodist Church, Bishop William Decker Johnson, was also a guest at the Carter home, but like all African-Americans, Earl even refused him the privilege of entering the Carter home via the front door.

The Carters did not suffer as badly as other families during the Great Depression, largely because Earl had no debt, and ran a cash business. He had the means to purchase land at depressed prices. In his memoirs, Jimmy Carter wrote that his mother offered to feed migrant workers willing to exchange labor for a meal. Earl was a Democrat who remained loyal to the party, even though he considered FDR to be too radical for his liking, but this did not stop him from taking a job with the Rural Electrification Administration.

In 1941 Jimmy Carter became the first person in his father's family to obtain a high school degree. His goal was to join the navy and he applied for the Naval Academy an Annapolis. While awaiting word on his application, he studied engineering at Georgia Southwestern Junior College. With a little help from local Democratic Congressman Stephen Pace, Jimmy Carter was admitted to the Academy in 1942. He spent a year in Naval ROTC at his college, and in June of 1943 he boarded a train bound for Washington, DC.

Carter was 5'9" and a lean 121 pounds when he entered the academy. He was an introvert and struggled with both the physical and social demands of the academy. In spite of this, he graduated in June of 1946, placing 59th out of a class of 820. A month later he married Rosalynn Smith, a Georgia girl of modest means whose father was a mechanic. The Smiths were also Baptists, but were not as wealthy as the Carters. Jimmy had known Rosalynn since they were children. Rosalynn was a friend of Jimmy's sister Ruth and the two had began dating in 1945 when Jimmy was home on leave. She attended Georgia Southwestern Junior College. She had turned down Carter's first marriage proposal because he hoped to further the college education. They agreed to postpone marriage for a year. She accepted his second proposal and the couple were married on July 7, 1946. 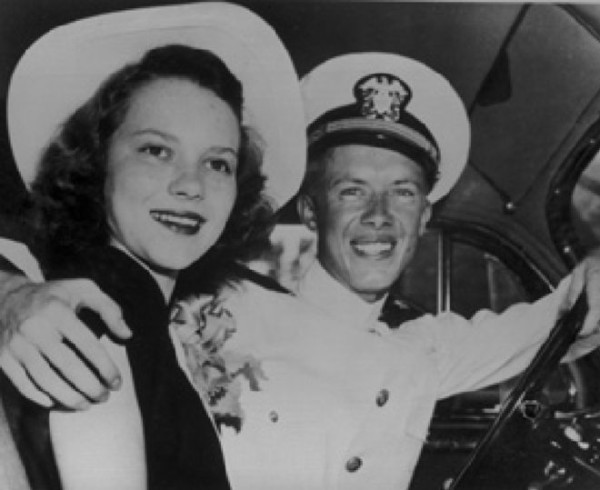 The young couple lived in Norfolk, Virgina, where Carter was assigned to the Battleship Wyoming. They had their first child John William (Jack) in July of 1947. Jimmy was accepted into the Navy's submarine training program and was assigned to the USS Pomfret. The Carters moved to Pearl Harbor in March of 1949 and in April of the following year the Carters' second child, a son James Earl III, was born. Further postings moved the family to Groton, Connecticut, and then to San Diego during the Korean War. In 1952 he was chosen by Admiral Hyman Rickover to work on a nuclear submarine program. A third son, Donnel, was born in 1952. Carter studied Nuclear Physics at Union College in Schenectady, New York, and it looked like his star was on the rise in the US Navy.

In the summer of 1953, Carter learned that his father was terminally ill, with pancreatic cancer. Earl Carter died on July 22, and Jimmy Carter made one of the most difficult decisions of his life. He left the navy to return home to run the family farm. His mother Lillian was suffering from depression as a result of her husband's death. The decision made Rosalynn unhappy. She did not want to return to the south, and both Carters later acknowledged that this was a difficult and trying time for their marriage. Little did they suspect that the move would alter the trajectory of Jimmy Carter's life that would take him on a path to the White House.
Collapse