In General John Eisenhower's biography of Zachary Taylor, he describes his subject as "a man whose looks deceived those who met him for the first time. One glance at that rough physiognomy could convince the casual viewer that here was the son of a poor family, a man of the soil." But as Eisenhower goes on to write, looks can be deceiving. 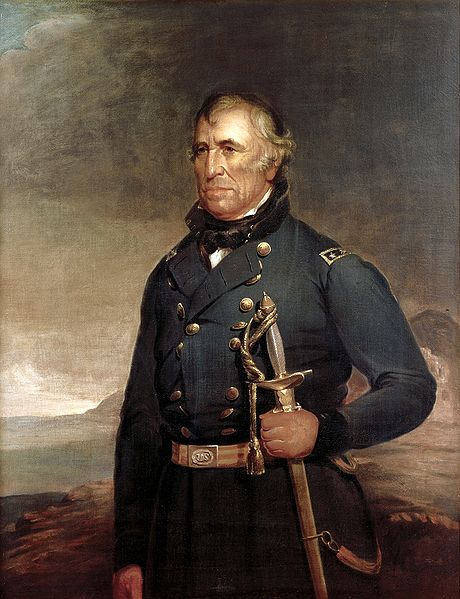 Zachary Taylor (no middle name) was born on a plantation in Orange County, Virginia on November 24, 1784. His family was not a poor one, but a prominent one. His father, Richard Taylor, had served as an officer in the Continental Army during the American Revolution, holding the rank of Lieutenant Colonel. Taylor's ancestors had come to the United States on the Mayflower. He was a descendant of Elder William Brewster, a Pilgrim leader of the Plymouth Colony, a Mayflower passenger, and a signer of the Mayflower Compact. Taylor's second cousin through that line was James Madison, the fourth president. His mother was Sarah Dabney Strother who was born in Maryland.

Richard Taylor's exemplary service during the Revolution had resulted in a grant of a parcel of land near Louisville, Kentucky (where Taylor has been laid to rest.) Too many tobacco crops on his Virginia land had exhausted the soil and the promise of a larger tract of land convinced Richard to move his family (which included a pregnant wife). But when he realized the rigors of the journey, Sarah and the two Taylor boys with Virginia relatives. Zachary Taylor was the child who was in utero. When baby Zachary was eight months old, Richard Taylor returned from Kentucky to move his family to their new home on land that he had cleared in the meantime.

The Taylors reached Louisville on August 2, 1785 and moved into their log cabin on Beargrass Creek, five miles east of town, on a farm they called Springfield. The new home had its challenges, with plenty of wild animals and unfriendly first nation tribes nearby. A neighbor named Mrs. Chenoweth was said to have had a perverse pleasure in scaring the boys by removing her bonnet and displaying her bald head, the result of having been scalped when she was younger.

It appears that Taylor was taught to read and write by his mother. The first letter written by him that has survived is a letter accepting a commission in the army, which is replete with spelling mistakes. He received a more practical education in how to stay safe on the frontier, how to be a good planter, and how to be a shrewd businessman like his father. Even after he joined the army, he was able to acquire land holdings, and at that time the army granted generous leaves of absence for soldiers who needed to return home to look after their land.

Zachary Taylor was strongly influenced by his father's military service. Eisenhower writes that Taylor "was not attracted to fancy uniforms nor to the parade ground, but practical soldiering seems to have became second nature to him." He joined the army in 1808 at the age of 23, applying for a commission as a Lieutenant. It was unusual for someone his age to enlist at that rank, but his timing was right. The army was expanding in anticipation of a coming war with Great Britain. Taylor was assigned to the newly formed Southern Infantry Regiment commanded by his fellow Kentuckian, Lieutenant Colonel William Russell. Taylor's first assignment was as a recruiting officer, but he had little luck in his home state.

In April of 1809, he took his new company of 80 men to New Orleans by boat, where they were under the command of the notorious scoundrel Brigadier General James Wilkenson. Conditions in the city were not good. It was extremely hot and discipline was lax. The men were soon moved to a spot 13 miles south. Conditions seemed worse, as sickness filled the camp, poor sanitation existed and food quality was poor. Orders came to move the men Fort Adams, near Natchez. Even more men died on that trek. Eisenhower writes, "It was one of those rare instances in which an army was destroyed without the firing of a single bullett."

Taylor became ill early on, but survived the illness. He was sent home to Louisville to recover. It was while on this extended leave that he met Margaret Mackall Smith, who was called Peggy. She was visiting her sister in Jefferson County. After a brief courtship, they picked up a marriage license on June 18, 1810 and were married on June 21st. As a wedding gift, Taylor's father gave him 324 acres of land. Sometime the following spring, the first of their six children, Anne, was born. 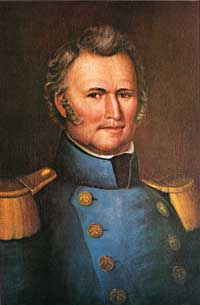 When Taylor returned to the army, he was promoted to Captain in November of 1810. The army had been spread out among various posts to protect settlers from the threat of hostile native tribes. There was a move in the nation's capitol among Democratic-Republicans who questioned the need for a large standing army. Taylor's second cousin was now President of the United States. But two years later, the need for a larger army would become more apparent with the coming of the War of 1812.
Collapse