The first chapter of Alan Brinkley's brief biography of John Fitzgerald Kennedy is entitled "The Irish Prince". Both are more than apt descriptions of the 35th President. His roots dug deep into the Emerald Isle, and the Kennedy family was the closest thing to American Royalty, or so it seemed. Kennedy's maternal grandfather, John F. Fitzgerald, was an Irish politician who was elected to Congress in 1894 and later became Boston's first Irish-American mayor, serving three terms from 1906 to 1914. He lived to see his grandson get elected to Congress and presciently predicted that someday he would become President of the United States. Known as "Honey Fitz", he and his second wife (who was also his second cousin) would have six children together, the oldest being John F. Kennedy's mother Rose, who was born in 1890. 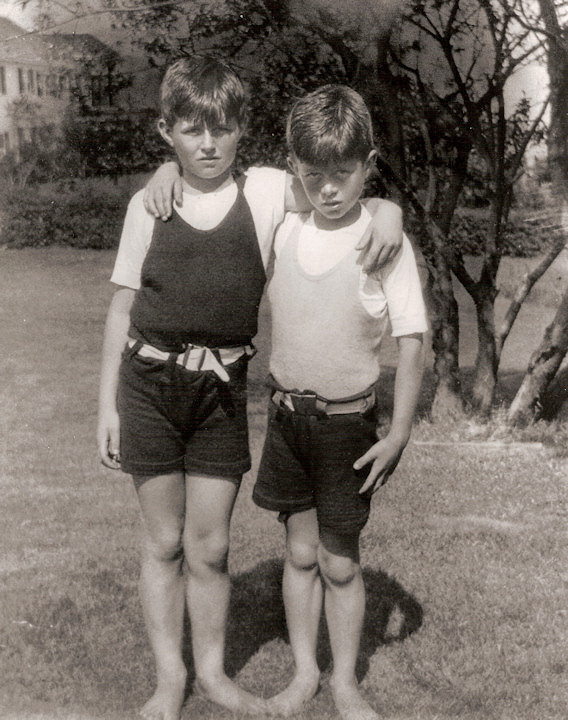 JFK's paternal grandfather was Patrick J. Kennedy, a man with little education, but a good head for business. He saved his money and bought a string of taverns and bars. As his net worth grew, he bought a liquor importing company, then an interest in a coal mine and eventually a bank. His wife, Mary Hickey, was the daughter of a wealthy tavern owner. She had four children, including Joseph P. Kennedy, JFK's father, who was born in 1888.

Rose toured Europe as a young woman and had aspirations of furthering her own education by attending Wellesley, but ended up staying close to home to help in her father's political career. Joe Kennedy attended Harvard Business School before joining the family banking business. By age 25 he was President of Columbia Trust, and despite his youth, the business prospered under his leadership. Honey Fitz had another suitor in mind for his daughter Rose, but she was a strong-minded young woman and her attraction to Joe Kennedy won out. The two were married in 1914. They shocked their families by moving into a house in Brookline, Massachusetts, a Protestant community. Their first son Joseph Patrick Kennedy Jr. was born in 1915 and in May of 1917, John Fitzgerald Kennedy was welcomed into the world.

Joe Kennedy was described as smart, ambitious and ruthless. His goal was to become a major player in the banking world, a door usually not open to Irish Americans. He left the bank briefly when the first world war broke out, to become manager of production at Bethlehem Steel. His ability helped in motivating Bethlehem Steel executives to use their influence to keep him from being drafted. After the war he was successful as a stock broker, moving to New York to be close to Wall Street. His family grew to nine children, but Joe was often away from home, leaving the child care responsibilities to Rose (and the servants of course.) The family moved to Hyannis Port, Massachusetts, the setting for much of the Kennedy family lore. Joe grew distant and was said to have had a number of affairs, including one with actress Gloria Swanson.

Young Jack Kennedy lived in the shadow of his older brother Joe, on whom the patriarch of the family pinned his hopes for great things. It didn't help that as a child, John F. Kennedy suffered from a number of health issues. He was a restless and fitful baby who had difficulty digesting milk, and suffered frequent stomach aches. At age three he contracted Scarlet Fever. This was followed by more stomach issues that often left him too weak to stand. This continued into adolescence, with frequent hospital stays for undiagnosed illnesses.

When the family had lived in New York, JFK attended Riverdale Country School, but his C+ average prompted his parents to send him to boarding school, Canterbury, a Catholic school in New Milford, Connecticut. There JFK continued to suffer health problems and reported feeling homesick. He spent the last three months of the school year being tutored at home. The next year he attended Choate, where his brother Joe was also a student. His teachers sent unflattering reports home about how he was "undependable", "careless" and "lacking application". Soon his health worsened once again and he was frequently in and out of hospital. It was impossible for him to live up to the example set by his older brother Joe who was athletic and responsible, though JFK was remembered for his charm and likeability.

Kennedy spent several weeks at the Mayo Clinic undergoing testing, while maintaining a cavalier attitude. He wrote to his friend Lem Billings, "I had an enema given by a beautiful blonde. That, my sweet, is the height of cheap thrills." At this point in his life he followed in his father's footsteps when it came to embarking on a series of meaningless sexual conquests and one-night stands. He and some like-minded friends formed a club called the Muckers. His father commented, "if I had organized that club, it's name would not have begin with M." They embarked on a series of hijinx and pranks that nearly ended with the expulsion of the group's membership. Despite this (or perhaps because of it), his classmates voted him "most likely to succeed."

In 1935 JFK enrolled at Harvard, but withdrew before the term began in order to go to London and attend the London School of Economics. He experienced more health problems and returned stateside to enroll in Princeton. He found the school hostile to Catholics and before the term ended, he once again found himself in hospital for more tests but no diagnosis. He wrote to his friend Billings, "Took a peak at my chart yesterday and could see they were mentally measuring me for a coffin." He spent the remainder of the school year recovering his health at Palm Beach.

The following year he once again enrolled at Harvard. There he applied himself to his studies more diligently, and was active as a swimmer. He hoped to get a letter in football, but was unsuccessful in meeting that goal. That summer (1937) he and Lem Billings traveled to Europe where he had an audience with the Pope and spend some time in France and Germany. He was impressed with German efficiencies, writing, "the Nordic races are certainly superior to the Latins". As the prospect of war loomed, his interest in global politics and in history grew.

When he returned to Harvard the next year, he joined the Hasty Pudding Club and wrote for the Harvard Crimson. In 1938 Joe Kennedy Sr. was appointed as Ambassador to Great Britain. JFK embarked on another tour of Europe, in part to research his senior thesis, and in part to enjoy a social life offered by the status of being an ambassador's son. He called it "Appeasement at Munich." It was panned as "badly written, but a laborious, intelligent discussion of difficult question." The thesis ended up being published under a different title: Why England Slept.

The publication of the book was followed by a period of restlessness. Kennedy considered enrolling in law school. But as the United States contemplated entry into the second world war, JFK failed physical exams for both the army and navy in early 1941. A few months later his father arranged for another exam which found no serious health issues, thanks to some help from Joe. In October JFK joined the Office of Naval Intelligence in Washington. 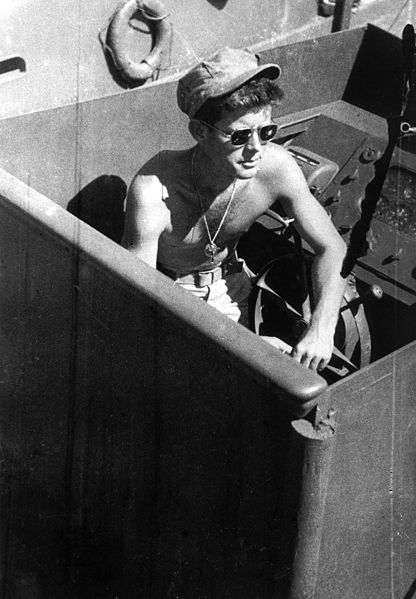 The war years would be eventful ones. He would have his famous adventures as the captain of PT-108 and in 1944 his older brother Joe would die when the plane he was on exploded. John F. Kennedy was now the oldest son of the Kennedy family, the one who would be the political star in the family. The dominoes would soon fall such that Honey Fitz's prediction of a president in the family would come true.
Collapse