It seems that becoming a Jeffersonian/Jacksonian Democrat was in James K. Polk's genes. According to Polk biographer John Siegenthaler, as far as Polk's grandfather Ezekiel and his father Samuel were concerned, "Jefferson was their Jesus", and Polk's former cabinet member and early biographer George Bancroft also writes that Polk "grew up imbued with" Jeffersonian principles. Yet another biographer, Eugene McCormac supports this theory, calling Polk's Jeffersonian beliefs "inherited". James Knox Polk was born on November 2, 1795 at a home (a log cabin of course) on Little Sugar Creek in Pineville, North Carolina, just southwest of Charlotte. He was the first of 10 children born. His mother, the former Jane Knox, named him after her father, James Knox. Jane was a grand-niece of John Knox, the man who had brought the Reformation to Scotland. His father Samuel Polk was a farmer and surveyor of Scots-Irish descent, and like many southerners, he was also a slaveholder. The Polks had immigrated to America in the late 1600s, settling initially on the Eastern Shore of Maryland but later moving to south-central Pennsylvania and then to the Carolina hill country. Samuel and Jane were married on Christmas Day of 1794.

The Knox and Polk families were Presbyterian. Religion was a subject of some conflict in the home as Polk's mother remained a devout Presbyterian, while his father and paternal grandfather Ezekiel Polk, like Thomas Jefferson, were deists who rejected Presbyterianism as being dogmatic. When James was supposes to be baptized, Samuel Polk refused to declare his belief in Christianity, so the minister, James Wallis, refused to baptize the child. The Polk family and Wallis had a long-standing feud. When Ezekiel Polk's wife had given birth to a stillborn child, Wallis insensitively told Ezekiel that the child would be denied admission to heaven. The remark caused lifelong antipathy between the Polks and the clergyman. A determined Jane Polk nevertheless instilled in her son many Calvinistic characteristics such as self-discipline, hard work, and piety. His father instilled in the child more worldly values such as how to be a good farmer and how to build wealth.

In 1803, Ezekiel Polk and four of his adult children moved their families to the Duck River area in what is now Maury County, Tennessee. Samuel Polk and his family followed in 1806. The Polk clan were the leading family, especially when it came to politics in Maury County and in the new town of Columbia. Samuel became a county judge, and the guests at his home included Andrew Jackson, who had already served as a judge and in Congress. As he grew up, James Polk was indoctrinated in anti-Federalist and pro-Jeffersonian comments.

James K. Polk himself recalls his early years as a time when he was in poor health. In his own diary, he records that he "enjoyed bad health." He was slightly build, and low on energy. He experienced recurring bouts of stomach problems. He did accompany his father on surveying trips, but was unable to help with any heavy lifting. His father proposed a mercantile career for the boy and arranged for young James to work in a friend's general store. But that didn't work out so well.

At age 17 James Polk was diagnosed as suffering from urinary stones. At this time, around 1812, medical science knew of no other means to address this problem than by crude surgery, conducted at a time before anesthesia. Sam Polk sought out the best surgeon available. He selected Dr. Syng Physick of Philadelphia, a man known as "the American Father of Surgery". Polk was placed on a bed in a covered wagon for an 800 mile trip to Physick's hospital. But as the pain increased, a change of plans took place and the covered wagon headed to Danville, Kentucky instead, where Dr. Ephraim McDowell, another contemporary well-known physician resided and practiced.

"By modern standards the operation was a terrifying procedure. It occurred under whatever sedation was obtainable from brandy. Jim's legs were held high in the air and being restrained by straps and assistants, the operation was done as quickly as possible. The procedure was to cut into the perinium (the area immediately behind the scrotum and in front of the anus) with a knife and thence through the prostate into the bladder with a gorget, a pointed sharp instrument designed for this purpose. The stones were then removed with forceps or a scoop."

The operation must have been very traumatic for the teen-aged Polk and it is believed to be the reason that Polk did not father any children. Polk spent a week recovering before he was able to travel back home. As soon as he had healed, he was sent off to a Presbyterian academy at the Mount Zion community, near Columbia, Tennessee. Although Polk was the oldest boy in his class and had no previous formal education, it is said that he excelled at his academics and was also praised by headmaster Reverend Robert Henderson for his "exemplary moral conduct". From there he went on to Bradley Academy at Murfreesboro where he also did well. That school's headmaster, Reverend Samuel Black, called him "the most promising young man in the school."

Pleased by his son's academic prowess, Samuel Polk sent his oldest son next to the University of North Carolina at Chapel Hill. He managed to stay out of a controversy at the school in which students revolted over the censorship. Polk became active in the school's Dialectic Society, a debating club. There made acquaintances with many future politicians including his roommate, William Molseley, who later became Governor of Florida. Polk graduated with honors in May 1818. 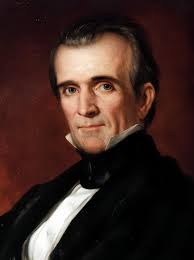 After graduation, Polk moved to Nashville, to study law under renowned trial attorney Felix Grundy, who became a mentor to him. It was here that Polk began his entry into politics. On September 20, 1819, he was elected clerk of the Tennessee State Senate, which then sat in Murfreesboro and to which Grundy had been elected. He was re-elected clerk in 1821 without opposition, and continued to serve until 1822. In June 1820, he was admitted to the Tennessee bar, and his first case was to defend his father on a charge of public fighting. He secured his release for a one-dollar fine.

On June 15, 1849 (171 years ago today), James Knox Polk, the 11th President of the United States, died at his home, Polk Place, in Nashville, Tennessee, at the age of 53. Despite being a one term President, he has consistently been ranked as one of the greatest presidents because of his ability to set an agenda and achieve all of it. Every year when I recall Polk's legacy, I always think of the words from the last verse of the song "James K. Polk" by the alternative group They Might Be Giants:

In four short years he met his every goal
He seized the whole southwest from Mexico
Made sure the tariffs fell
And made the English sell the Oregon territory
He built an independent treasury
Having done all this he sought no second term
But precious few have mourned the passing of
Mister James K. Polk, our eleventh president
Young Hickory, Napoleon of the Stump

Whether or not Polk did indeed meet his every goal (and some would dispute the accuracy of that claim), there is something about Polk that fascinates those of us who are

potus_geeks. In a post about Polk in a previous year I opened with the words "My name is Ken and I'm a Polkaholic." There is something addictive about learning about Polk that has caused me to read almost every book I could find about him, and it has motivated me to travel to the James K. Polk Ancestral Home, his de facto presidential museum located in Columbus, Tennessee not once, but twice. (Once I drove there and back from Pensacola, Florida, stopping in Mobile, Alabama to pick up a friend for the trip, all in the same day. If that's not rampant Polkaholism, I don't know what is.) 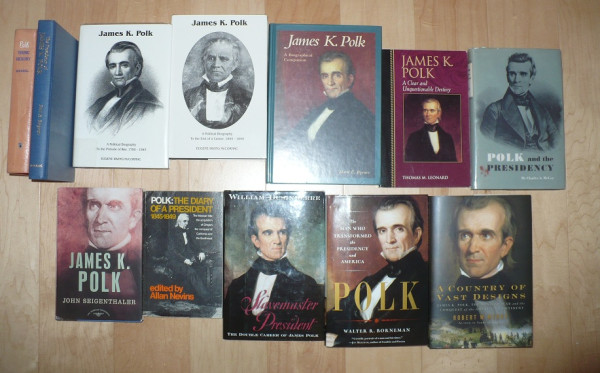 In an article in the Daily Beast, Polk was called the "least known consequential president" of the United States. He was born in Mecklenburg County, North Carolina on November 2, 1795. He moved to Tennessee, the state that represented as a Democrat, in the US House of Representatives. Polk served as the 17th Speaker of the House of Representatives from 1835 to 1839. He was Governor of Tennessee from 1839–1841, but lost his bid for re-election in 1841 and again in 1843.

Most considered Polk to be a has-been at that point, but he was the Democratic Party's surprise candidate for president in 1844, after neither of the three front-runners could win a 2/3 majority of the delegates. Polk defeated Henry Clay of the Whig Party by promising to annex the state of Texas. Polk was a protege of Andrew Jackson and governed on the principles of Jacksonian Democracy.

Polk was known for a number of foreign policy successes. He threatened war with Britain over the issue of which nation owned the Oregon Country, and then compromised and split the ownership of the region with Britain. When Mexico rejected American annexation of Texas, Polk led the nation into the Mexican-American War, which gave the United States most of its present Southwest. Many believe it was an unjust war. Polk secured passage of the Walker tariff of 1846, which lowered rates which benefited his native South, and he established a treasury system that lasted until 1913.

During Polk's term, the U.S. Naval Academy and the Smithsonian Institution opened, the groundbreaking for the Washington Monument took place, and the first postage stamps in the United States were issued. He was a workaholic and a micro-manager. Polk kept his promise to serve only one term and did not run for reelection.

Whether or not Polk "met his every goal" is a matter of contention. Research Professor Tom Chaffin ably makes the case, in his 2014 book Met His Every Goal? James K. Polk and the Legends of Manifest Destiny (reviewed here in this community) that the story of Polk entering the Presidency with this famous "to do list" is an apocryphal one. Nevertheless, Polk still deserves his reputation as the most significant President between Jackson and Lincoln. 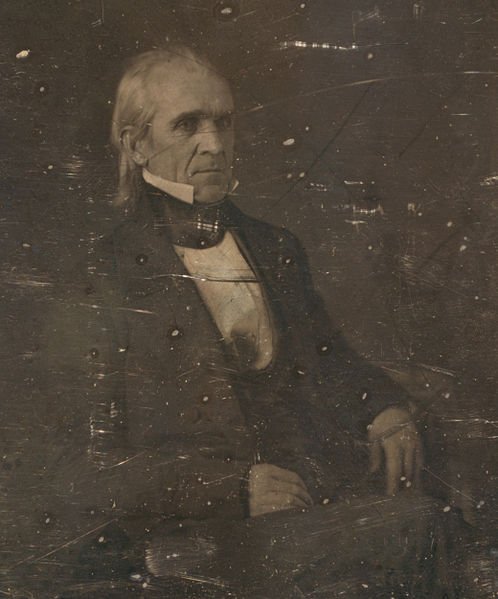 Polk's time in the White House took its toll on his health. He never took a holiday and his time in the White House exhausted him. Polk lost weight and had deep lines on his face and dark circles under his eyes. After his term ended, he traveled home to Tennessee, embarking on a goodwill tour of the south on his way home. He is believed to have contracted cholera in New Orleans, Louisiana, on the way home. James K. Polk died at his new home, Polk Place, in Nashville, Tennessee, at 3:15 pm on June 15, 1849, three months after leaving office. He was buried on the grounds of Polk Place. Polk's last words were directed to his wife Sarah, to whom he was very devoted. He is reported to have said "I love you, Sarah. For all eternity, I love you." As Polk's biographer Walter Borneman wrote in his 2008 book entitled Polk: The Man Who Transformed the Presidency and America: "Even if this utterance was embellished, there was nothing in Polk's life to suggest that the sentiment behind it was not true."

Polk had the shortest retirement of all Presidents at 103 days, and he was the youngest former president to die in retirement. He and his wife are buried in a tomb on the grounds of the Tennessee State Capitol in Nashville, Tennessee. I paid a visit there in October of 2014 when I was in Nashville, staying at a hotel a very short walk away. There are those who would like to see Polk's remains relocated to Columbia, Tennessee. Stay tuned for what will happen on that front. 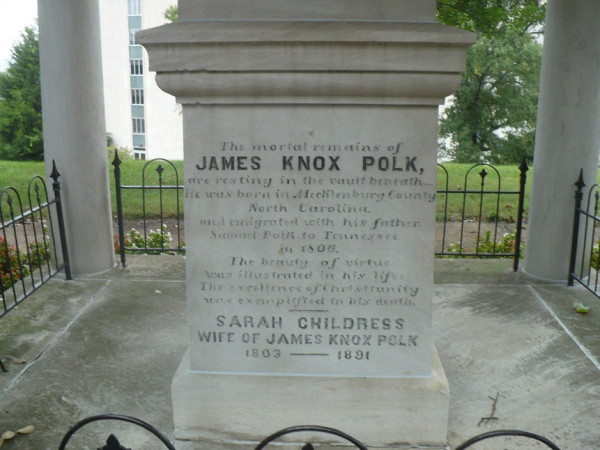 If you still haven't seen it, here is a video of the song James K. Polk by They Might Be Giants: